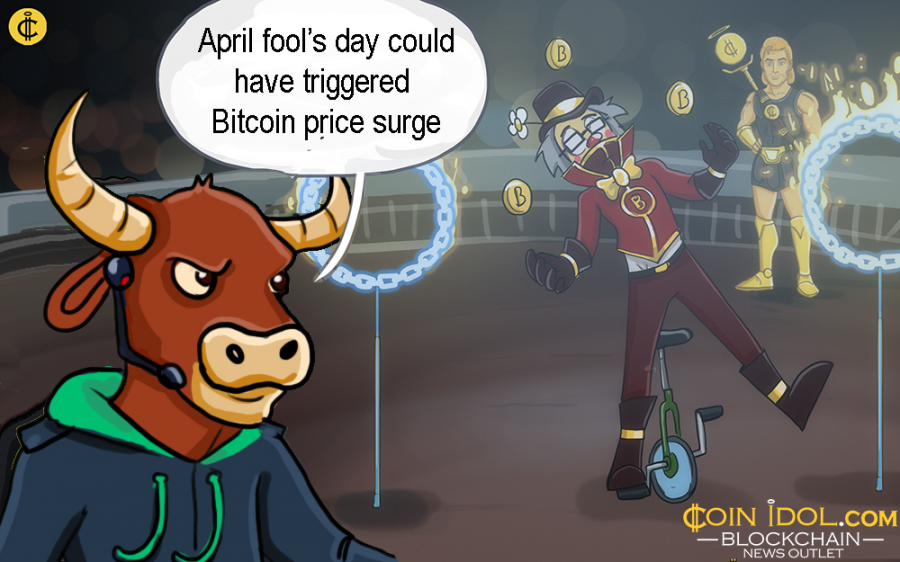 Bitcoin surged to the highest level a few hours after April 1 (April Fool’s day), which has led very many people in the cryptocurrency industry to believe that this factor was behind the record skyrocketing since the past five months. Meanwhile, Bitcoin (BTC/USD) is trading at $5027, according to coinmarketcap data.

The shocking news that first appeared on Finance Magnates, indicated that the U.S Securities and Exchange Commission (SEC) had approved two applications for BTC exchange-traded funds (ETFs) after the authority holding an emergency meeting.

Just 30 minutes into Asian trading after that trigger, the price of BTC increased its value to over $5,000, seeing it to trade at that level for the first time since November, 2018. And this was the highest single-day gain for Bitcoin since the month of April, 2018.

Bitcoin inrushed to almost $20,000 in late 2017, the crowning of a crypto bubble compelled by retail investors. But in 2018, prices plunged by ¾, with trading subjugated by lesser hedge funds and cryptocurrency-related companies.

Several crypto market analysts started to explore the factors that caused this significant increase in the BTC price and the sudden market shift, since there was no positive news or signals surfacing in the days before the phenomenon.

Some analysts believe that the anonymous buyer who bought a sizeable order of around 20,000 Bitcoin worth $100 million and went ahead to spread it in various globe’s giant crypto exchanges including Coinbase, Bitstamp and Kraken, may be one of the factors behind this hasty and surprise BTC price spike.

“There has been a single order that has been algorithmically-managed across these three venues, of around 20,000 BTC.”

“If you look at the volumes on each of those three exchanges – there were in-concert, synchronized, units of volume of around 7,000 BTC in an hour.”

According to a senior analyst at eToro, Simon Peters, the soar may be due to “short sellers covering their positions,” hence subjecting a skyward pressure on price. The upward trend in BTC price is a green light that the crypto market is recovering from a deep ditch.

“Bitcoin is on fire at the minute as it punches through its previous resistance level,” Peters further revealed.

Still, all analysts could not indicate any exact developments that could clarify the anonymous and sizeable buyer’s big order.