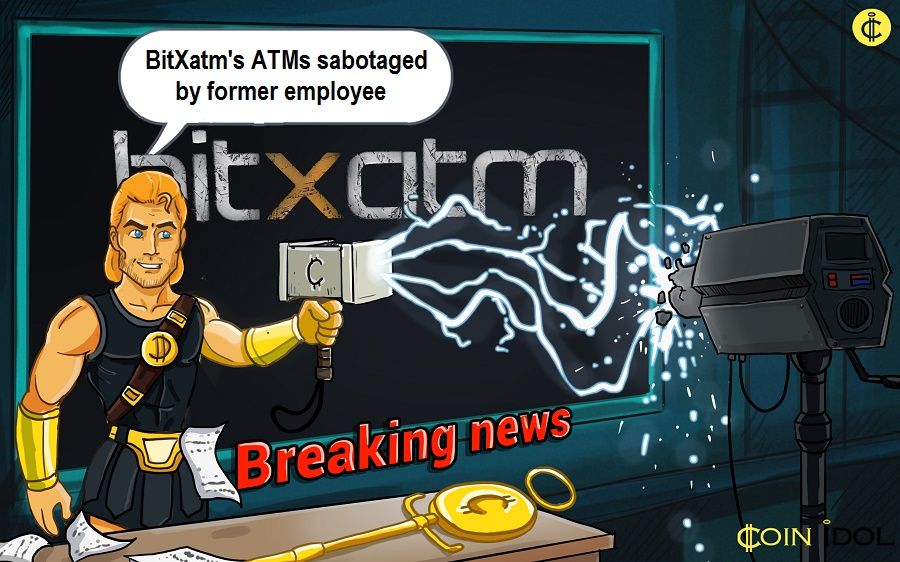 BitXatm Network was recently sabotaged by a former employee. A total of 18 Bitcoin ATMs from the machine’s first generation, out of 197, have been compromised, officially stated Gabriel Prodanescu, CEO of BitXatm.

The first signal about problems at BitXatm Network CoinIdol.com received directly from Rob Gonzalez, CEO at UTXO. He said:

“Аccording to one of my traders, who owns 5 ATMs of BitXatm, his Bitcoins on the machine went to a certain address that is containing over 100k usd in bitcoin. Wallets of the operators are apparently hacked”.

Rob Gonzales said that they were contacting support but received no help. He said: “95% sure the machines were compromised”.

Michael Patryn, founder and CEO of Quadriga Fintech Solutions from Canada, commented that problems with Bitxatm support are a common thing: ”I’m not surprised. Bitxatm may have the worst customer support in the space. Deliveries average 6m late, products rarely work properly”.

What has really happened with BitXatm?

However, the CEO of BitXatm, Gabriel Prodanescu, explained the situation:

“New generation ATMs, as well as the private clouds (ATMs belonging to clients that choose this service, usually “fleet owners”), were not affected due to additional security layers. Affected ATMs will be operational and secured in the next 24-48 hours.
We have already filed an official complaint and a criminal investigation was started by Special Unit of Cyber Crime and Terrorism of Federal Police (DIICOT).
Internal investigations are in progress, we will be transparent and update you every 24 hours. Press release will be posted very soon.”

CoinIdol.com will keep our readers updated.