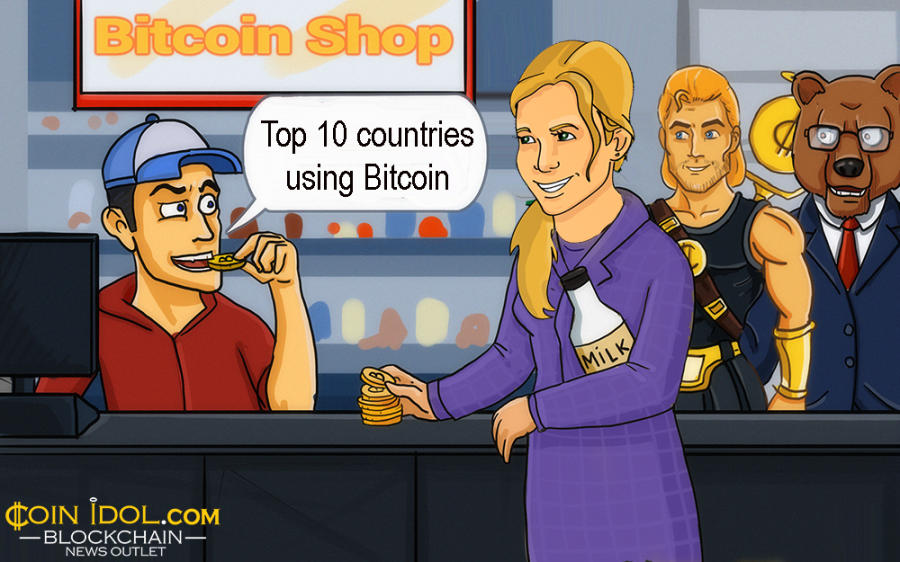 An assessment of crypto usage is not an easy thing to be done, since it is based on population, environment diffusion and legal background. And for this matter, therefore, this assessment has been made based on data from Localbitcoins, Coinatmradar and Coinmap. It has also been made based on the circulation of ATMs and legal acceptance of the currency in these top 10 nations in question.

However, there are nations where Bitcoin (BTC) is not allowed, but where the peer-to-peer (P2P) exchange is far-flung because of environmental problems such as high inflation. Taking Venezuela as an example, it does not surface on the list but it has a lot of Localbitcoins users. Venezuela does not give real information on acceptance in store particularly Bitcoin. The country (Venezuela) seems to be using Dash more than any other crypto.

Here is the list of top countries that use BTC

The country where Bitcoin is highly far-flung in payments, partially because the banking sector has largely integrated BTC into electronic payment systems. The country has tens of thousands of stores & Nomura approximates that there are more than one million Japanese holding BTC, and it is now part of their life. In Japan, BTC is regarded as a legal currency.

From the commercial point of view, the US has the biggest share of stores which allow BTC as a method of payments: 26 percent in total, according to data from Coinmap. It also has over 2445 ATMs and a large number of Localbitcoin users. Bitcoin is also considered a legal asset in the U.S.

The use of BTC is far-flung in South Korea, especially with ATMs in its supply chains and shopping centers which allow Bitcoin, such as Goto Mall which has 620 stores. It is a closed market, and therefore, it is very hard to read and construe from the outside.

Data from Coinmap shows that 15.3 percent of the globe’s Bitcoin-accepting stores are in Italy. There are also around 39 ATMs where crypto can be withdrawn directly and it also has a large number of Localbitcoins users. Bitcoin is also recognized as a currency in Italy - Quibitcoin. Italy recently selected a team of experts to explain the country’s scheme and strategy on distributed ledger technology, as Coinidol reported. This shows that there is increased interest in the industry. This will, in turn, lead to economic growth in the country.

It has stores which accept Bitcoin and makes up only 2.3 percent in the globe. However, a full list of stores which allow BTC is very difficult to find. Bitcoin is legal in The Netherlands. It has over 22 ATMs of crypto and a large number of Localbitcoins community.

The UK has over 210 Bitcoin ATMs. The UK also has very many stores which allow BTC and has around 11 percent of the overall transactions on Localbitcoins. In the UK, Cryptocurrency is regarded as a legal currency.

Sweden is one of the countries where electronic payment systems are on a high rise, which makes BTC payment very easy. It has a lot of activities which allow Bitcoin as a method of payment. The Localbitcoins community is also very large, but it has fewer ATMs.

Russia has around 16 percent of the world’s Localbitcoins transactions, and also has 48 crypto ATMs. It also has very many stores and restaurants which allow BTCs as payment. Bitcoin is legal in Russia, though it faces a challenge of massive use of ordinary electronic money.

Brazil has a relatively large number of stores and businesses which allow cryptos as a method of payment, including 2 transport firms. Brazil is in the 22nd position in the world using Localbitcoins. It has just 2 Crypto ATMs. In Brazil, BTC is considered a legal asset.

According to the rankings of countries using Localbitcoins, South Africa is in 10th position. It has around 5 Crypto ATMs. Bitcoin is considered legal and it is used in most of the businesses.

According to Coinmap, there are more than 14,000 stores in total across the world that officially accept BTC.