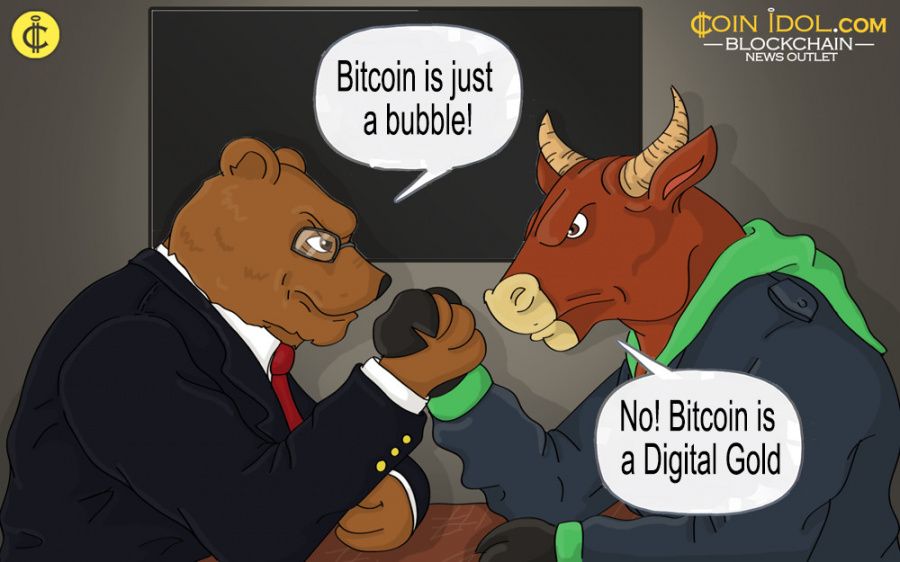 Bitcoin has been the subject of debate for as many years as it has existed. Coinidol has tried to figure out the prevailing opinion - is it good or bad?

We tend to only believe in something we can touch or see. With cryptocurrency, neither is possible. For many people, knowing little more than nothing about digital technologies and innovation, Bitcoin is a phantom, a ghost - many believe in it, though no one sees it.

Debates about Bitcoin have been held for as long as it has existed. Experts and financiers have been banging heads trying to prove their opinions, with little use though. It is hard to prove something you can’t see.

Many experts in the traditional finance field tend to think that Bitcoin is nothing more than “a bubble”. Despite being experts in figures, they can’t understand the essence, and, moreover, the value, of a digital code. The mining process is also an unsolvable puzzle to many of them. Complex explanations don’t work - it is still something an ordinary brain can’t embrace.

Billionaire investor Warren Buffett is a vigorous critic of Bitcoin. Back in 2014, he advised investors to stay away from that currency. Despite the fact that the value of it has been constantly growing, he is still rather hostile towards cryptocurrency.

"You can’t value bitcoin because it’s not a value-producing asset. It's a mirage basically," Coindesk quoted him saying.

Another member of the Bubble club is Fan Bao, chief executive of investment bank China Renaissance, thinking bitcoin is “getting a little bit bubblish”. However, this expert has more faith in blockchain technology, stating that “it is a very exciting technology, probably the most disruptive technology in our industry, the financial services industry.”

BlackRock Strategist Richard Turnill shares this opinion, believing bitcoin markets bear “many characteristics of a bubble”, but that blockchain technology has its chances for life.

JPMorgan Chase CEO Jamie Dimon is even more hostile toward Bitcoin. He doesn’t think it’s a bubble, he has called Bitcoin “stupid” and a “great product for crooks”. Later, though, he got more diplomatic by simply refusing to discuss the topic.

Is Bitcoin a Digital Gold Indeed?

As much as cryptocurrency lovers would like to bombard The Bubble club members with rotten eggs, they can’t, as those people are too important in their industry. But no one can stop them from trying to protect the innovation they are so fond of.

Most Bitcoin supporters claim the cryptocurrency is much like gold. First of all, because it has been mined as well. Actually, the process of Bitcoin mining is even more complicated than that of gold. The difference is that we can actually see the gold shining.

Apple co-founder Steve Wozniak is a supporter of this idea. At the Money 20/20 conference in Las Vegas, he expressed his thoughts on the potential of Bitcoin despite such harsh criticism of some experts. He stated:

Peter Thiel, the billionaire co-founder of PayPal, also thinks Bitcoin has been underestimated. He thinks the cryptocurrency is “a reserved form of money and is excellent for storing value.” However, he believes it should not be used for making actual payments.

Morgan Stanley Chief Executive Officer James Gorman thinks “the concept of anonymous currency is very interesting for the privacy protections it gives people, interesting because what it says to the central banking system about controlling that.”

Another Bitcoin sceptic, billionaire investor and entrepreneur Mark Cuban, has changed his opinion towards cryptocurrency. Obviously, he has found some arguments for himself to do that. Despite stating that Bitcoin is “more religion than asset”, he invested money in Bitcoin ETN, as well as at least one initial coin offering. He even advised “real adventurers to store 10% of their savings in Bitcoin.”

Bitcoin Through the Eyes of Mere Mortals

The experts may bang heads as much as they want defending their opinions, the ordinary people care little of that. For most of them, Bitcoin is something highly puzzling, especially for the undereducated in developing countries.

Even many of those more educated can barely get an idea of what Bitcoin is, as they can neither see nor touch it. All those codes and schemes and blockchains are nothing more than words, strange and confusing words. What is important then?

The fact that Bitcoin helps underbanked and unbanked people make payments or send money to their families. What is important is that it actually works where fiat money doesn’t. If you live miles away from the nearest bank and have no car to get there, you will gladly use a mobile telephone and even the slowest internet in the world to send money where you need to send it.

That’s what matters to the ordinary people. And if you actually can make payments with Bitcoin, why not call it “money”?