How to Save Money in 2019: Top Most Insecure Crypto Exchanges 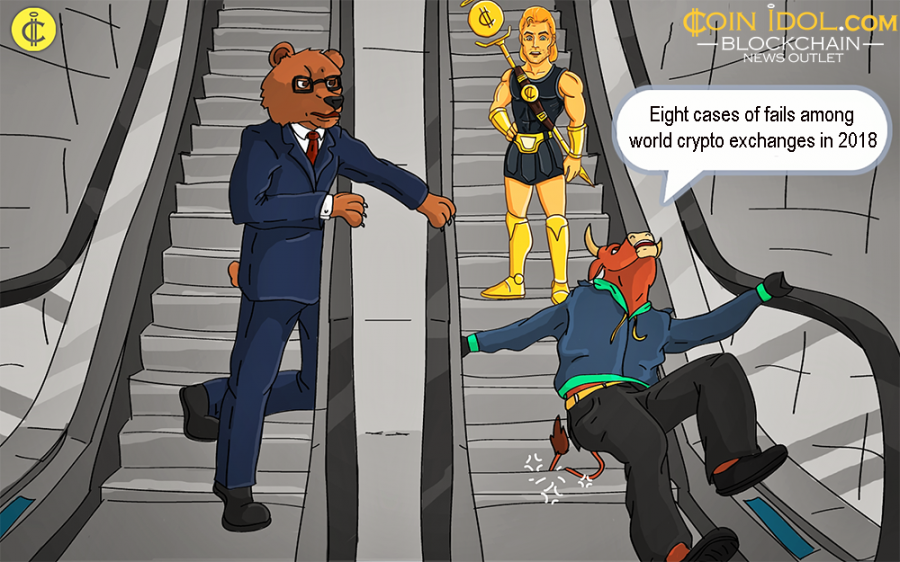 2018 has been a long and challenging journey for most cryptocurrency exchanges and the industry at large. As fabled investor Warren Buffett loves to say “only when the tide goes out do you discover who's been swimming naked.” Every time any exchange is attacked the market is going down together with all crypto assets. Coinidol has collected eight cases of fails among world crypto exchanges in 2018.

The Taiwan-based crypto exchange Cobinhood was among the most striking failures last year. In 2017, the firm accumulated over $15 million during an Initial Coin Offering, encouraging and promising potential investors a commission-free frontier and frequently used tokens in its work.

The investors that risked it became victims of a classic pump & dump scheme: initially, the quotes of tokens were artificially shaken over 40 times, and thereafter, the price dropped over 100 times, and currently, their cost is not more than 20% of the initial price. The exchange shows total degradation, and the quotation lists of Cobinhood are also so indicative.

Customers in the crypto sector were angry about reports that the Paxful crypto exchange was scamming them. Some users say that Paxful is having undercover hackers who steals funds from the accounts of users.

Early last year, the Italy-based crypto exchange, alerted the community of the malicious theft of 17 million Ripple tokens. Very many ‘unconfirmed transactions’ made a total loss of over $170 million. Stolen tokens delineated a large ratio of the entire quantity that were traded within the Nano market. Later, BitGrail declared itself bankrupt.

Other currencies on BitGrail were not affected at all. Francesco Firano, the BitGrail owner, believes that the event happened because of an error in the blockchain tech of the digital currency itself. In response, the Nano representatives shared the stance that this unexpected theft happened because of the antecedently undiscovered loopholes on the system of the exchange itself.

In springtime 2018, deadly hackers infected the devices of Coincheck workers with a harmful virus, that enabled them to perpetrate one of the biggest thefts in the crypto industry. The infection led to the theft of NEM worth over $548 million.

The virus penetrated the system via an email message which was opened by one of the workers of Coincheck. Later, the trading on the stock exchange was halted to discover the reasons and get rid of the security breach. Considering the preponderance of digital currencies in Japan, it was expected to see over 260,000 crypto investors become victims of token theft.

In June last year, the South Korea-based Bithumb crypto exchange lost more than $32 million worth of crypto and the outrage caused a significant reaction in media. Consequently, the site was forced to halt the operations and all the affected users were promised compensation, as Coinidol reported.

Also, as Coinidol reported in June, the Coinrail crypto exchange was maliciously hacked and lost the initial coin offering tokens of a series of projects such as NPXS, Aston X, Tron and Dent totalling more than $40 million. However, the exchange didn’t reveal how much it wants to compensate its users who fall victims.

The financial problems began in July 2018. An heir of BTC-E exchange WEX, Russia-based, conducted a potent and multi-stage activity to withdraw money from users. Following the financial problems, a message surfaced on different platforms saying that WEX exchange will shut down very soon.

Actually, the initial report revealed that “the situation got out of control,” which seems to be the main reason for the shutdown of the exchange. The volume of user losses on BTC-E & WEX was approximated to be totalling over $100 million.

Another Japan-based crypto exchange fell victim to digital currency hackers despite the regulatory scrutiny and high security measures. The exchange refused to learn from the lesson taught to Coincheck hence paying a heavy price for it.

Malevolent hackers accessed cryptos kept on a hot wallet of Zaif –  a crypto exchange managed by Osaka-based Tech Bureau and successfully syphoned off BTC, BCH, MONA to the total of over $60 million before the exchange discovered an unusual outflow of money from its crypto wallet and immediately halted operations.

It is alleged that around $19.6 million of the stolen funds belonged to Zaif, and the rest belonged to users.