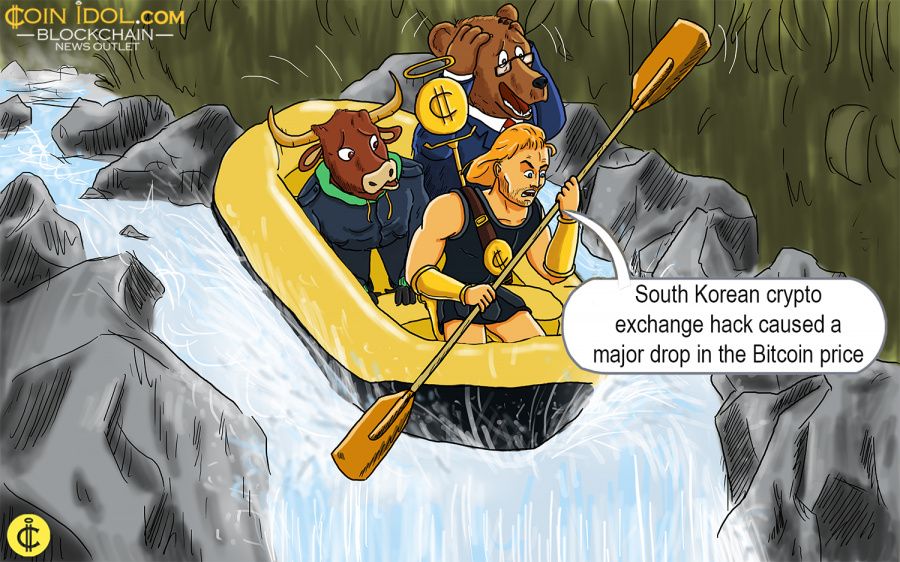 The price of Bitcoin, as well as other main altcoins, has decreased within an hour after small South Korean crypto exchange Coinrail revealed on Monday it had been hacked. The scammers allegedly stole up to $40 million in virtual coins.

According to TechCrunch, the Bitcoin value has dipped more than 10% after the hack of Coinrail. Fraudsters stole some kinds of crypto coins that were lesser known on the world’s crypto market. They included NPXS, Aston X, Dent, and Tron.

On Monday, Coinrail announced in a statement that more than 30% of the cryptocurrency went missing from its storage. Barely having around $2.5 million in daily volume, the exchange is considered to have lost $40 million during the heist.

The crypto markets responded to the incident very harshly, with the price of Bitcoin dropping from $7,240 to $6,752 within an hour. Now bitcoin trading price is $6,771. Ethereum, the second largest trade coin by market cap, fell from $570 to $511, recovering mildly to $523. Altcoins and other tokens suffered the same price drop.

The Coinrail hack is not a huge surprise for the financial market, as it has already become the fourth large crypto theft this year. Japanese crypto exchange Coincheck lost $400 mln in digital currency during a hack in January, while Italian exchange Bitgrail had $200 mln stolen in February. The third case became Coinsecure, with $3.3 mln worth of Bitcoin missing from its wallet.

As the Bitcoin price declined, so did the coin market cap. It decreased from $340 billion to $295 billion, making it a two-month low.