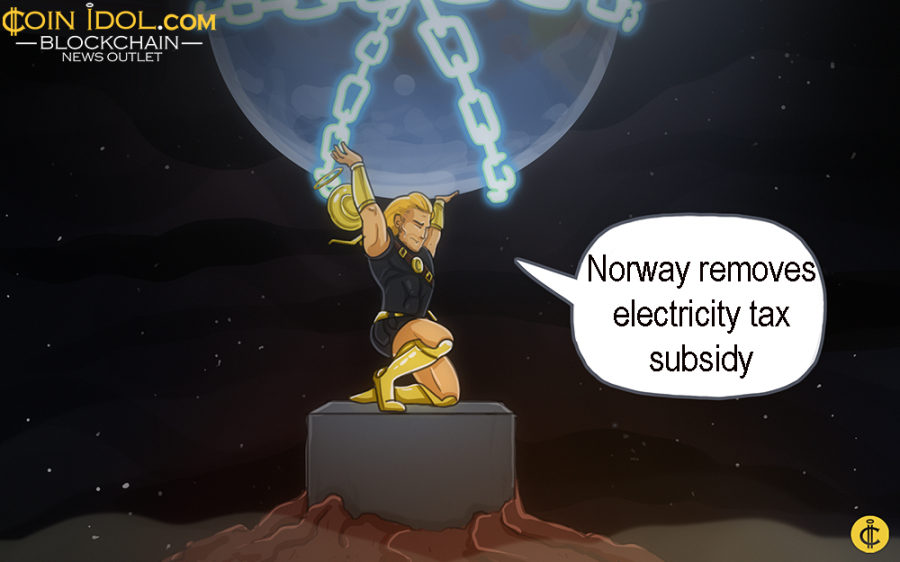 The government of Norway has removed a tax subsidy on electricity currently given to Bitcoin (BTC) miners.

Some Scandinavian Nations including Norway, charge tax on power usage. As Aftenposten reported that the government revealed that crypto miners in Norway will be required to pay the usual power tax in 2019.

Currently, bigger mining companies get the same power tax discount as other electricity-intensive factories and industries operating in Norway. The companies with power capacity of over 0.5 megawatts (mW) are just charged 0.48 øre (around $0.00056) per kilowatt hour (kWh) not the standard rate if 16.58 øre (around $0.019). One øre is equivalent to 100 of a Norwegian krone.

That implies that qualified miners were paying only 2.8% of the standard tax rate to run their rigs.

Norwegian parliamentary representative, Lars Haltbrekken, revealed in the report that:

“Norway cannot continue to provide huge tax incentives for the most dirty form of cryptographic output like bitcoin. It requires a lot of energy and generates large greenhouse gas emissions globally.”

So, coming to the end of the subsidy, crypto miners will have to cough up huge taxes, which is likely to lower their net profits at a moment when the bear market is exerting pressure on the crypto industry.

The proposal to end Norway's subsidy was purportedly suggested by the Norwegian Tax Administration which is under the ministry of finance, and it has now been officially approved in the state budget. This will be put into force in January next year.

“This is shocking. Budgets have changed framework conditions without discussion, consultation or dialogue with the industry.”

The removal of this subsidy will probably force cryptocurrency miners to countries like Sweden and Denmark.

However, as we earlier reported, Norway was planning to change to a cashless society, according to a report from the central bank.