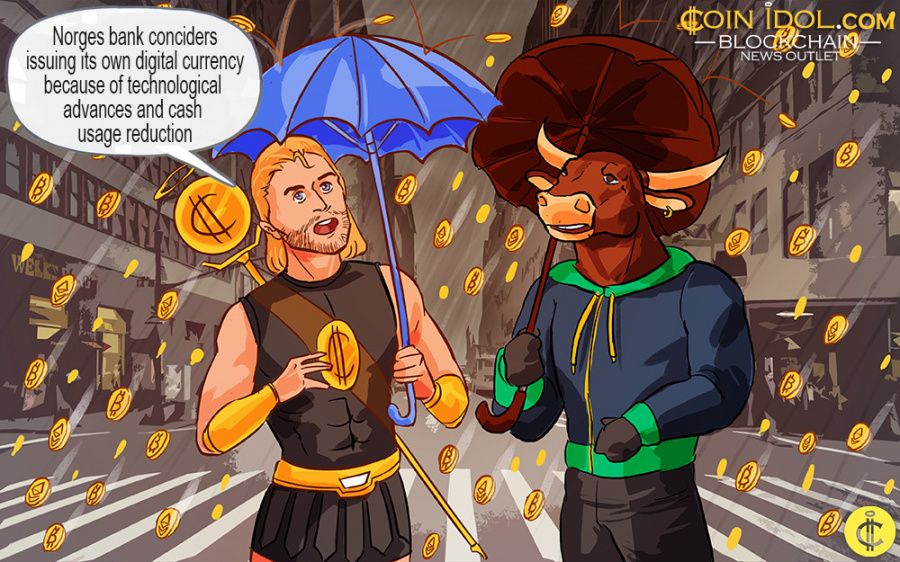 The Central Bank of Norway, Norges bank, last week published a paper on Central Bank Digital Currencies (CBDCs) done by a working group as an eke out to cash in order to ensure confidence in money and the monetary system according to a working paper May 18.

The paper states on the necessity for forming Norway’s own cryptocurrency and that its use by the Central Bank should have a positive impact on the ability of banks and other financial institutions in offering loans.

According to the reports, discovering the contingency of issuance of CBDCs has become more significant because of technological advances and cash usage reduction.

Instantly, Norges Bank has only finished the initial stage of analyzing the need to form a digital currency and notes that it will continue to issue cash as long as a particular event needs it.

Moving to a cashless future

European banks are keen to minimize the rotation of cash and more often propose to shift to digital banking use. The paper states the similar idea as well.

“Norges Bank will continue to issue cash as long as there is demand for it. But when cash usage declines, a CBDC can be an alternative to deposit money. The primary purpose of a CBDC is to ensure confidence in money and monetary system. e-money and crypto-assets are hardly viable alternatives in the near and medium term,” the author wrote.

The working group disclosed that it is too early to judge whether Norges Bank should issue CBDC and added that it has also not established issues letting it come to a conclusion ruling out the possibility at present. The paper states:

“The working group has identified a number of factors that suggest caution, particularly in order to avoid conversion of bank deposits into a CBDC that is so rapid and so extensive as to impair lending.”

The abstract and general idea of CBDC is being discovered by great central banks such as the Bank of Canada, Bank of England, Riksbank and others.

The authors note three real CBDC applications that include a suitable legal tender as a supplement to cash, the introduction of a reliable alternative to deposits in Private banks and an independent backup solution for electronic payment systems.

The Central Bank of Norway was in the early stages of researching on anonymous digital currency as early as April last year.

Tags
Central Bank Banking Cash Society Money Norway Digital currency CBDC
Most Popular
Mar 08, 2021 at 14:34
News
Not Only Bitcoin: the NBA Stars Adopt Dogecoin Following the Flagship Cryptocurrency
Mar 08, 2021 at 13:37
News
Bitcoin Struggles To Break the Overhead Resistance at $52,000 as Buyers Continue Their Unending Price Tussle
Mar 08, 2021 at 10:20
News
Polkadot Sustains Recent Rallies, May Attempt Breakout at Recent High
Mar 07, 2021 at 11:30
News
Blockchain and Cryptocurrency Industry is Becoming Emancipated as the Number of Women in It Is Growing
Mar 07, 2021 at 09:18
News
Chainlink Declines as It Continues to Face Rejection from Previous Highs
More