Starbucks Partners with Microsoft to Use Blockchain 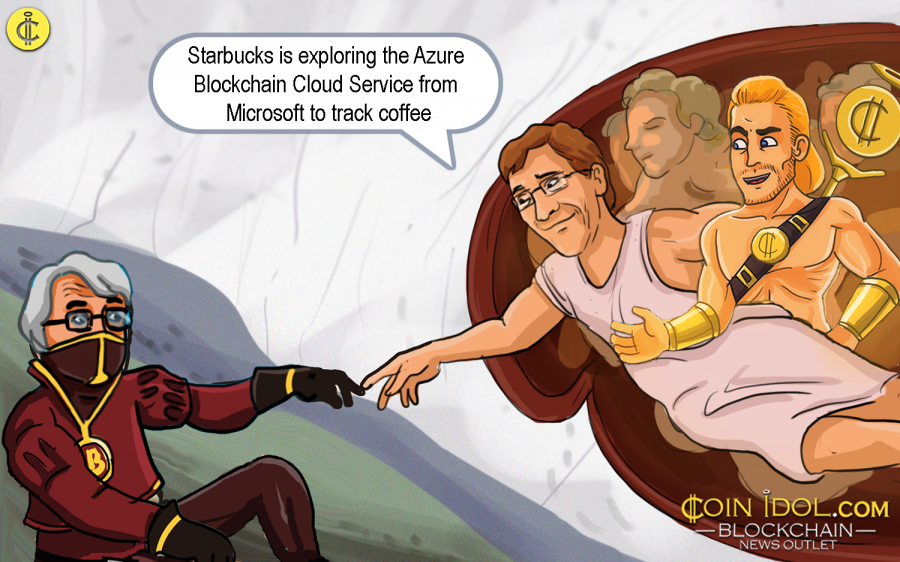 The Seattle-based giant Starbucks is exploring the Azure Blockchain Cloud Service from Microsoft to track coffee. The partnership will also use other major innovative technologies including artificial intelligence (AI), internet of things (IoT), cryptocurrency, etc., to strengthen its bean-to-cup and further resolve prevailing problems in various sections of services.

In last year’s pilot, Starbucks revealed its bean-to-cup innovation, indicating that it would collaborate with potential farmers from Rwanda in East Africa , Costa Rica in Central America and Colombia in the northwest of South America, so as to successfully experiment with a blockchain and distributed ledger technology-based tracking network system.

This particular tracking system enables clients to effectively track making of the coffee and are also considering to start up latent financial and other economic opportunities for a multitude of bean growers in the aforementioned countries and other parts of the world.

With the innovative positive intervention of Microsoft, great initiatives such as predictive drive-thru ordering, bean-to-cup tracking bolstering, and linking of producing machines, will be enabled.

The two giant firms will work to securely connect producers in more than 30,000 Starbucks stores using the Azure blockchain cloud product – from coffee-making equipment to millers and blenders.

Azure blockchain service operates as a blockchain-as-a-service system particularly focusing on transforming the process of integrating hefty blockchain network system from its creation and gives it a better environment to modify.

The machines are enabled by the IoT, and could play an important role in collecting over a dozen data point for each shot of coffee towed, such as the quality and properties of water, variety of beans, and temperature (hotness or coldness).

Customers will Use Bitcoin and Other Cryptos to Make Coffee Payments

They are planning to expand the predictive drive-thru ordering initiative using the app that enables clients to make suggestions based on coffee orders made previously, and this edge could spread to digital billboards.

Earlier this year, the coffee bull partnered with Bakkt to install its groundbreaking software and allow customers make cryptocurrency payments including Bitcoin, Ether and Ripple. Bakkt also plans to bring more cryptoasset-related services closer to its customer this year. But, it still seems to take long time before we will actually get the chance to purchase a cup of coffee with the world’s leading cryptocurrency bitcoin or other major digital currencies.

However, the main blockchain and DLT application for Starbucks currently focuses on the bean-to-cup initiative to connect consumers with farmers so as to guarantee fair trade, and further enable farmers to exploit these developing lucrative financial opportunities.

Tags
Blockchain Starbucks Microsoft Coffee Cryptocurrency Tracking Cloud Service Technology Internet
Most Popular
Sep 22, 2021 at 12:12
News
Banks in EMEA Miss Out the Potential of Blockchain, with Only 19% Benefiting from the Technology
Sep 22, 2021 at 11:11
News
Bitcoin Cash Drops Sharply to the Oversold Region, Poises for a Fresh Uptrend
Sep 22, 2021 at 10:15
News
Learn Professional Trading From The Best. DIFX Academy Is The Place To Be
Sep 22, 2021 at 09:17
News
Cardano Declines to the Previous Low at $1.91 as Bears Resume Selling Pressure
Sep 21, 2021 at 13:11
News
The Chinese Digital Yuan Shows Success, but WeChat and Alipay Pose Threats
More