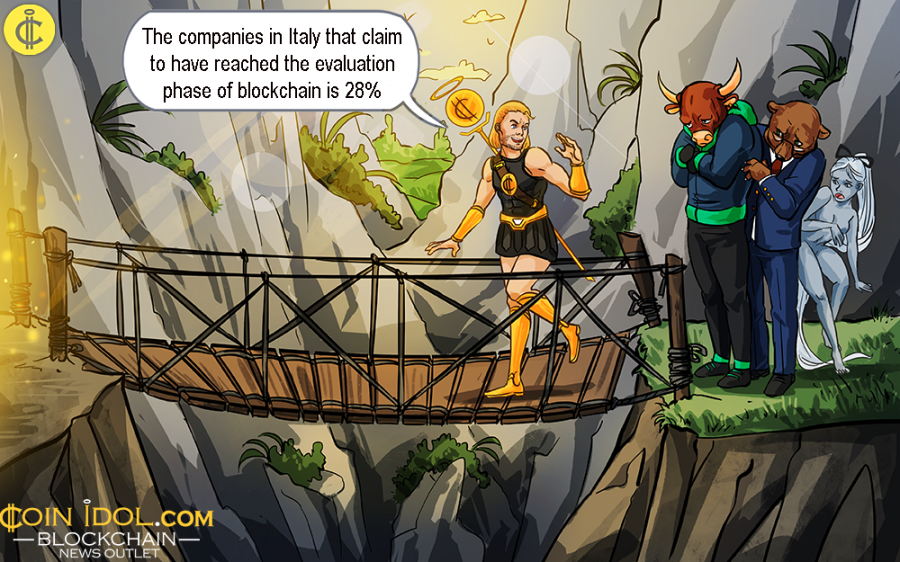 Research conducted by IDC last year shows that 75.5% of companies worldwide believe blockchain technology will facilitate their Digital Transformation initiatives for the next half a decade. In Europe, however, uptake is still very low, the percentage of firms which are conducting pilot projects in blockchain makes around 9% of the total number interviewed, according to a report by Tech Economy.

Indeed, in several firms, blockchain isn’t known at all or it is not well understood how it can be introduced into business activities and impact the business. Italy not excluded, the blockchain technology is today in a study phase – firms and public authorities are carrying out pilot projects but still in a test phase.

Generally, last year, the companies in Italy that claim to have reached the evaluation phase of blockchain is 28% according to IDC, but among these, no company has considered the implementation of this technology in production.

Is There a Ready Market for DLT?

IDC approximates the global expenditure in distributed ledger technology (DLT) by firms across all sectors clocked in at around 1.5 billion dollars last year, a significant rise of around 103% compared to 2017, and this ratifies how last year has been a vital year, particularly for Proof-of-Concept operations.

The US is the chief region for blockchain investment, with a share of around 46% of the entire market. In all of Europe, blockchain investment hit around 560 million euros, doubling the investment figures of 2017, and this shows positive interest on the side of firms operating within the continent to attempt pilot projects in blockchain technology.

Within the upcoming few years, the world investment in DLT will have significant growth rates, with an approximated CAGR in the period between 2018 to 2022 of about 73%. The total sum of expenditure is estimated to hit around $11.7 billion worldwide by 2022.

“The willingness to improve processes through digitization said Diego Pandolfi –research & consulting manager of IDC Italy – will continue to push investment in the blockchain, especially to renew and order obsolete processes that have many weaknesses in terms of security of transactions and data exchange."

However, Italy seems to be doing better and better with each day that passes, recently the University of Milano-Bicocca embraced blockchain technology to start certifying students’ academic degrees in order to reduce bureaucracy and also secure their authenticity, as Coinidol reported.