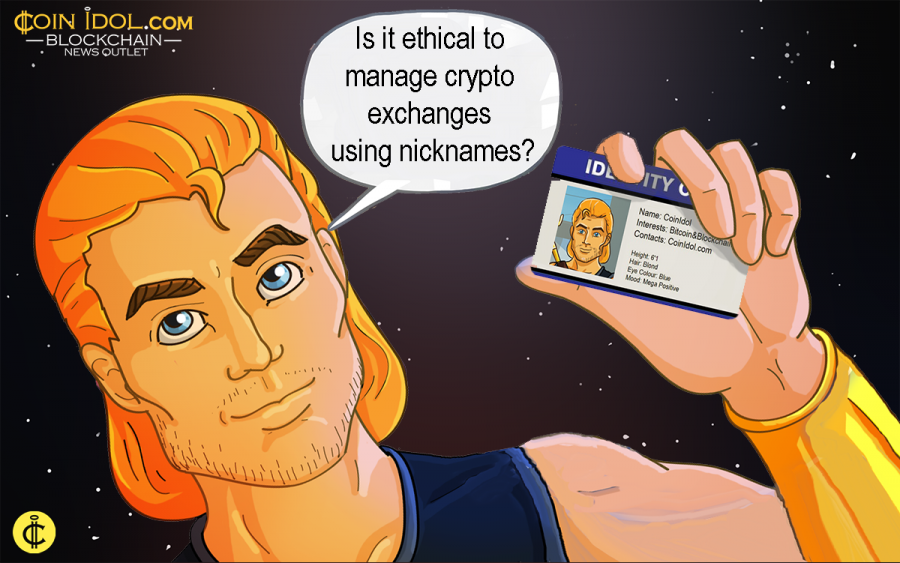 One of the core ideas of cryptocurrency is anonymity. The creator of bitcoin, Satoshi Nakamoto, is still the biggest mystery in the industry, as he (or she, or they) decided to hide his (or her, or their) true identity. That’s why there are cases where top leaders in the crypto community use nicknames, even if they run cryptocurrency exchanges. Is this ethical?

A reader of Coinidol.com has written a bunch of letters to the editorial email from the address ni23457@protonmail.com with the accusation that it’s not ethical to run a bitcoin exchange if you use a pseudonym. You make people identify with their real names to comply with the KYC requirements of the exchange, but you hide your real name from your customers. Is this ethical and legal?

Our reader has given information and proof, that top managers of the Changelly exchange use nicknames in all official documents, but freeze the money of clients if they don’t give their real ID. Moreover, top managers pretend to be citizens of the Czech Republic, but they are Russians. Is this illegal? Is it a threat to all business of the exchange? Can it be closed any day by the government of Russia or any other country, because of that?

Pros and Cons of Nicknames in the Field of Crypto

People from all over the world are engaged in crypto. Naturally, their real names reflect the traditions and culture of their countries. But for other countries, languages and cultures, they might sound weird or be difficult to pronounce.
The former CEO of Changelly, Konstantin Gladyshev shortened his last name to Gladych. That’s what he explained to Coinidol.com when we asked him about it. It is easier to pronounce and, therefore, easier to remember. A simple promotional move, which has been made previously by thousands of people. Is that a crime?

History of Satoshi Nakamoto in the Mask

There are numerous speculations about who was hiding behind the name Satoshi Nakamoto. Some assumed it could be Nick Szabo, Hal Finney or even Elon Musk. However, none of the versions appears to have any firm proofs.

Nevertheless, many of the industry players have used nicknames since then, all for their own reasons. It doesn’t mean that all of them are criminals or terrorists. They might be simply trying to make their names more understandable for the international community.

The Issue of Trust

Trust has always been a burning issue in the industry. It is a common belief that a strive for anonymity means a person has something to hide or is intending to do something illegal. How can one trust their money to someone like that?

On the other hand, with many countries trying to impose regulations upon cryptocurrencies, startups are required to do some KYC and AML compliance and demand identification from their customers. And here comes the ethics question. How can one demand any real IDs while using a nickname themselves? Why should people violate their own privacy if those they work with don’t?

However, we still have legal frameworks one must follow. But then again, there are numerous examples of people using nicknames while being highly trustful, and not only in the cryptocurrency sphere.

Leaders of the Movie Industry, who Operate With Huge Money Have Nicknames

Did you know that Nicolas Cage is using a nickname as well? His real name is Nicolas Kim Coppola, though many people are still unaware of that. As the actor stated himself, he didn’t want to be compared to his famous uncle, Francis Ford Coppola. It can hardly be called a crime.

Nevertheless, Cage is not only a famous actor but also a successful director and producer, whose activity includes dealing with investors and huge amounts of money.

The fact is that there is something worth more than money. It’s reputation. And in the modern age of the Internet and digital technologies, it is becoming more and more difficult to hide anything.

There are a huge number of cases where negative information has ruined people’s careers. If you are serious about your business, you would do nothing that could harm it, no matter what name you use. It is very difficult to build a strong reputation, but so easy to ruin it.

Eventually, it doesn’t matter if you use a real name or a pseudonym. There is always a reputation you build around it, and it is the reputation that wins people’s trust, not the ID.

What do you think about that? Let us know in the comments below.