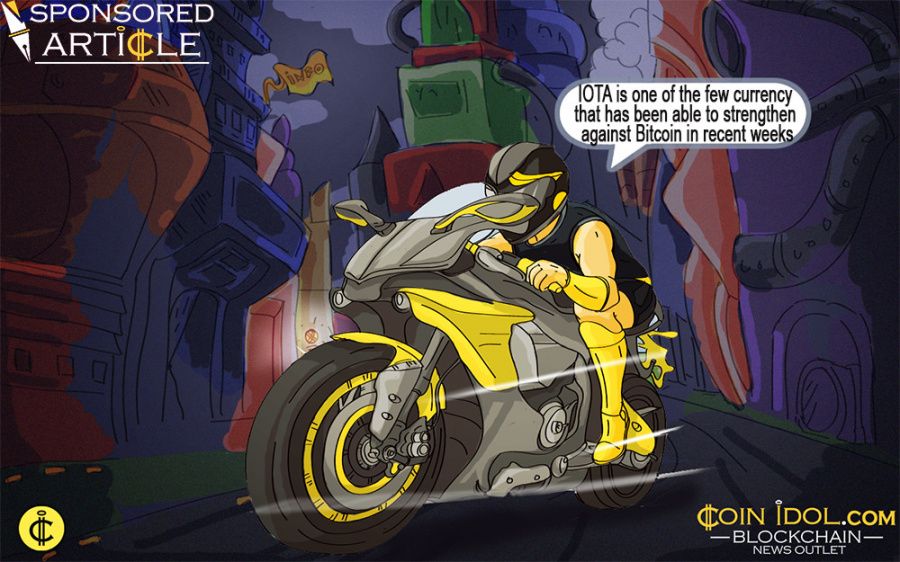 IOTA is one of the few cryptocurrency that has been able to strengthen against Bitcoin in recent weeks and can be used as hedging against decline the price of Bitcoin. The volume and price of IOTA is growing due to the announcement that IOTA have been listed on Coinone exchange. The more people that begin to trade with IOTA, the better for IOTA.

Let's take a closer look at the use of IOTA in the Internet of Things.

Linking blockchain with IoT is complicated due to the technological limitations. There are two main issues to look at.

Firstly, scalability. There are regularly more than 100,000 unconfirmed transactions on the Bitcoin Network which will be hard to sustain in the future. Nowadays, users have to pay high fees but this still doesn't mean that their transaction will take place.

IOTA have addressed how it is possible to solve these issues.

The main innovation behind IOTA is Tangle. This is a newly created, distributed ledger based on DAG (Directed Acyclic Graph). Tangle is a distributed database and P2P Network and it relies on a consensus and a validation mechanism. The validation process is ensured by one transaction confirming the previous two and there is an entire network of active participants who are directly involved in the approval of transactions. As such, consensus in IOTA is no longer separate from the transaction making process, it’s an intrinsic part of it. This is what enables IOTA to scale without any transaction fees.

The first step is 'signing': You sign the transaction inputs with your private keys.

The second step is 'tip selection': MCMC (Markov chain Monte Carlo) is used to randomly select two tips (i.e. unconfirmed transactions), which will be referenced by your transaction.

The third step is 'proof of work': In order to have your transaction accepted by the network, you need to have proof of work - similar to Hashcash (spam and sybil-resistance)

Because IOTA achieves consensus on the validity of transactions without any miners, there are no transaction fees.

Since consensus is parallelized, and not completed in sequential intervals of batches as in Blockchain, the network is able to grow and scale dynamically with the number of transactions. The more transactions made, the more secure and efficient Tangle gets.

IOTA makes it possible for a cluster of devices to branch off and make transactions in an offline environment by utilizing different communication protocols (ZigBee, Bluetooth LE, etc.) for P2P communication.

The main reason why IOTA was created is so it can be the backbone for the Internet of things.