The IoT Revolution Is Here With BlockMesh’s Global Communications ICO 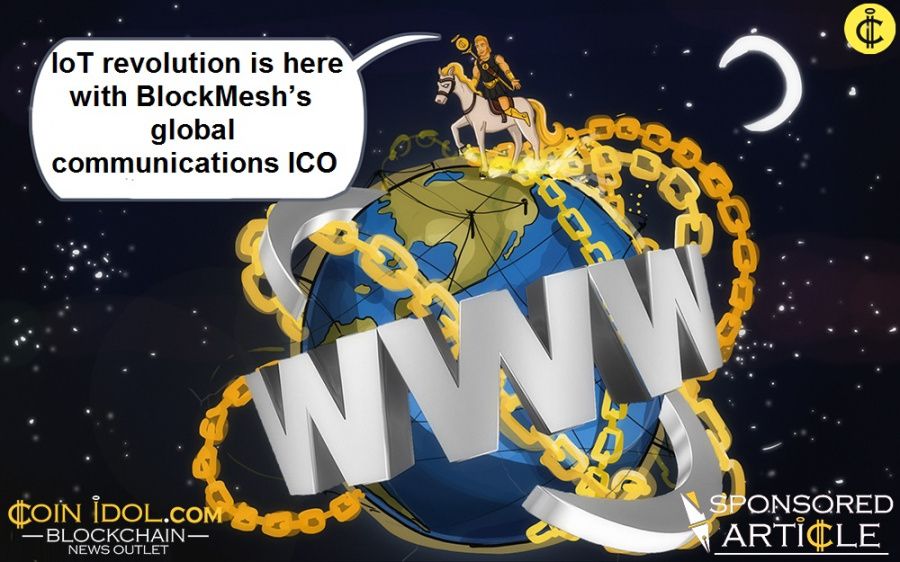 Imagine a cost-free communication system that protects users’ privacy. A system where one never has to worry about network coverage, cost of roaming, and exorbitant data charges. Better yet, wouldn't it be awesome if users could even be rewarded for using the network?

According to Mauritius-based communications communication startup, BlockMesh, is claiming to be set to deliver such a cost-free platform.

Utilizing the latest advancements in mesh networking technology, BlockMesh will allow users bypass the traditional cellular and ISP “toll gates” and seamlessly communicate with each other through a peer-to-peer mesh network of IoT devices. As IoT devices can communicate through Bluetooth and wifi instead of data, the company can offer not only cost-free solutions, but also an encrypted and secure communications platform.

A mesh network consists of groups of devices communicating and distributing information via peer-to-peer channels until it reaches the intended recipient. By 2020, there will be an approximated 20.4 billion IoT devices utilizing contactless communication protocols to transmit information.  Using this technology as the backbone of its communications infrastructure, BlockMesh, is developing an autonomous, self-healing, and self-reliable network that leverages bluetooth and WIFI protocols embedded in network communication devices for end-to-end encrypted communication. What’s more, the network incentivizes users’ participation by assigning a wallet address to every IoT device connected to the network and rewarding them for supporting the offline network. According to Bjorn Guido, Founder of BlockMesh, this will create a profitable and sustainable shared network.

“At BlockMesh we harness the power of the Internet of Things to provide interpersonal communication which isn’t just free to use, but actually rewards users in cryptocurrency to use it. Our network will be made up of the excess bandwidth that exists across the world. This will allow your smart television, your Wi-Fi router, iPad - basically, anything that has internet connectivity - to form part of our global revolution. Instead of your data being an expense it becomes an asset by earning you extra money.”

BlockMesh is a paradigm shift from the traditional communication, changing the way information is transmitted and accessed, and used on smart devices. The mesh network cannot be owned by any single entity due to their geographical dispersity. Based on the Ethereum blockchain, BlockMesh is completely decentralized and does not rely on any third-party to relay data. Users can freely send data and messages through its mobile app. The app allows users to transmit information costfree through bluetooth instead of WIFI or cellular tower primarily. However, the app can temporarily switch to WIFI and cellular tower transmissions in places where a strong mesh connection is yet to develop.

Recently, BlockMesh announced its partnership  with Bancor Protocol™ - to facilitate the liquidity of its token. This was shortly followed by a sold-out pre-sale that signalled the community’s readiness for the disruption of the communication industry. Buoyed by this, BlockMesh has announced its ICO (Initial Coin Offering) slated for February, 2018.

BlockMesh tokens sale is not only an opportunity for contributors to become a part of blockchain’s disruption of traditional service landscape, but also a unique offering for the global community to become a part of the BlockMesh company by purchasing tokenized stakes in the company in the form of a ‘coin’. The funds accrued from this public offering will be used to further the development of th platform and launch the technology.

A new era in mobile communication has arrived, visit the website for more information and read the BlockMesh whitepaper for a detailed understanding of the concept and technology. For complete information about this ICO, please visit: https://blockmesh.io

To learn more, or participate in the ICO visit their website: https://blockmesh.io/

Join the Chat on BitcoinTalk: https://bitcointalk.org/index.php?action=profile