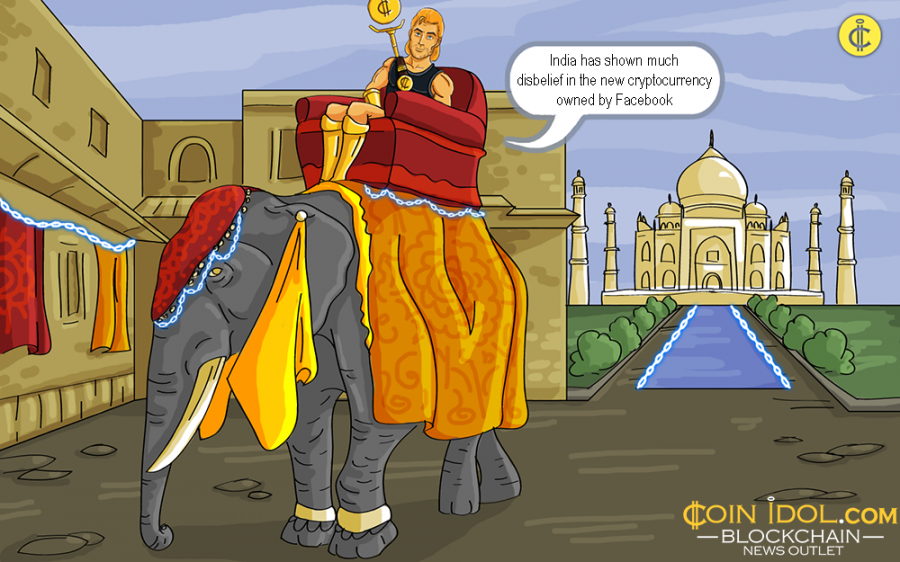 The Republic of India, the seventh-biggest nation by area geographically located in South Asia, has shown much disbelief in the new cryptocurrency owned by Facebook known as Libra aka GlobalCoin. In fact, the coin will not be allowed to operate in the country.

According to Subhash Garg, the current Economic Affairs Secretary, the design of Libra is unclear and its mode of operation has not been well enlightened by company behind it. He added that Libra seems to be a privately owned type of cryptocurrency, of which coins of this sort were earlier banned from being used in the country. In other words, they are not comfortable with private tokens including Bitcoin, GlobalCoin, Ether, Ripple, etc.

Furthermore, the Reserve Bank of India placed restrictions on the use of all cryptocurrencies in the economy. The Indian government is reportedly developing a new law with stringent penalties to curb the use of cryptos in the country.

The government and the Reserve Bank (RBI) have for long been against cryptocurrencies, for instance, they ordered all banks operating within the country not to deal with digital currencies or associate with anyone carrying out activities related to Bitcoin saying that any bank caught doing so will be held accountable as per the laws and directivities say. Currently, the government is forming tougher laws and severe penalties on the use of cryptocurrencies.

India and China Hostile to Cryptocurrency but Friendly to Blockchain

In June, Facebook revealed its future plans for its own stablecoin Libra, which will be officially launched next year, as we reported. However, Facebook has not tried to intervene with India’s decision on this matter, and has not yet sought for authorization from the government of India to roll out its so-called stablecoin within the boundaries of Asia’s third-biggest economy.

Many countries, including China and South Korea, have already expressed their concern on the upcoming cryptocurrency. A recent Financial report revealed that the Libra coin has to leverage countries such as India in order to succeed. The finder further states that there would be more than 440 million Facebook users in India by 2023, making it a strategic market.

In 2018, the Supreme Court of India approved a ban set by the RBI against exchange operators, Bitcoin and other digital assets. Up to this time, the exchange operators are still trying to challenge the RBI decision and the case hearing is scheduled for July 23, this month. The financial watchdog thinks that Bitcoin should not be treated as a legal tender since the Indian laws put it clear that money shall be made of either metal or paper and legally stamped by the government.

To cut a long story short, India's general stance about cryptocurrencies is hostile but friendly to blockchain, the underlying technology behind Bitcoin. In this sense, India is having the same opinion as China. Earlier this month, the RBI created a blockchain platform that will host massive distributed ledger tech applications by next year especially in the financial institutions including banks.