ICOs Created a Strong 44% Downtrend for Ether in 14 Days 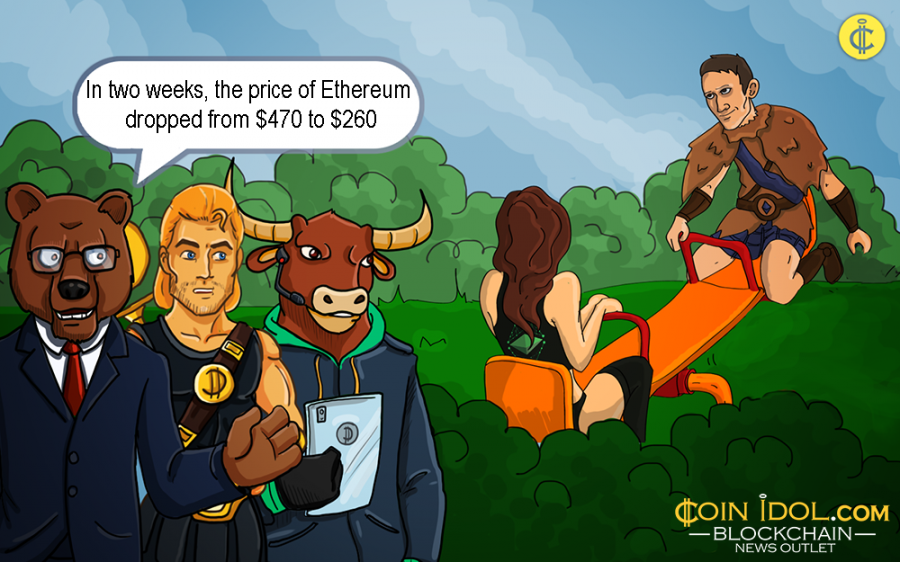 Within a period of just 2 weeks (August 1 - August 14), the price of Ether, the native crypto of Ethereum network, plunged by 44%.

In two weeks, the price of Ethereum dropped from $470 to $260, marking its lowest point this year by plummeting below the $300 mark for its first time since early November last year.

The whole Crypto market faced a sharp decline in real valuation, losing almost $150 billion of its real valuation in within a month. However, Ether, which performed particularly well against the US dollar over other bull Cryptos such as Bitcoin and Bitcoin Cash, easily turned out to be one of the worst performing Cryptos in August.

What Really Fueled the Decline of Ether?

On August 14, even after experiencing such a great plunge in price, Ether plummeted 18% of its value against the US dollar, falling from $300 to $260 within a half-day span.

While other Cryptos did suffer significant plunges in value, Bitcoin for example, only lost 6% of its Market Cap against the US dollar.

In this week, several analysts such as Eric Wall, a lead crypto researcher at FinTech firm Cinnober, revealed that Blockchain projects that made hundreds of millions of dollars in Ether in last one year dumped the digital asset on the crypto exchange market, producing a domino effect across big exchanges.

“The problem when you give millions of ETH to ETH competitors is that they can unload the ETH on the spot market and short ETH on the futures market before that, so they’re not only securing the funding but also manipulating the underlying spot market in favor of their shorts,” Wall said.

It is paramount to recognise that the total amount generated by Initial Coin Offerings (ICOs) in their token sales don't grant that new capital is penetrating the market but somewhat existing capital kept in major Cryptos such as Ether and BTC moving to ICOs.

Consequently, if ICO participants earmark and distribute millions of dollars in Ether to token sales, and the developers carrying out the token sales dump the capital generated in Ether on the Crypto exchange market, in a roundabout way it becomes a weighty sell order.

Hence, the Ethereum exchange market has tholed in the past three months, as ICOs continued to throw huge amounts of Ether on the crypto market.

In this very week, Arthur Hayes, CEO of BitMEX, a Crypto exchange, noted that in just a week, BitMEX became the top exchange for ETH/USD trading, as its 50X leveraged ETH/USD swap has transformed into the highly liquid Ethereum trading pair in the world market.

Given the general downtrend of Ether and the market at large, it is clear that the rise in the activity of the ETH/USD trading pair hosted by BitMEX shows an increase in the number of shorts by many investors that have lost trust and confidence in the short-period trend of Ether.

As it is hard to conclusively note that ICOs caused the price of Ether to crash seriously, it is self-explanatory that the liquidation of the capital generated by token sales played an important part in forming a weighty downtrend for Ether.