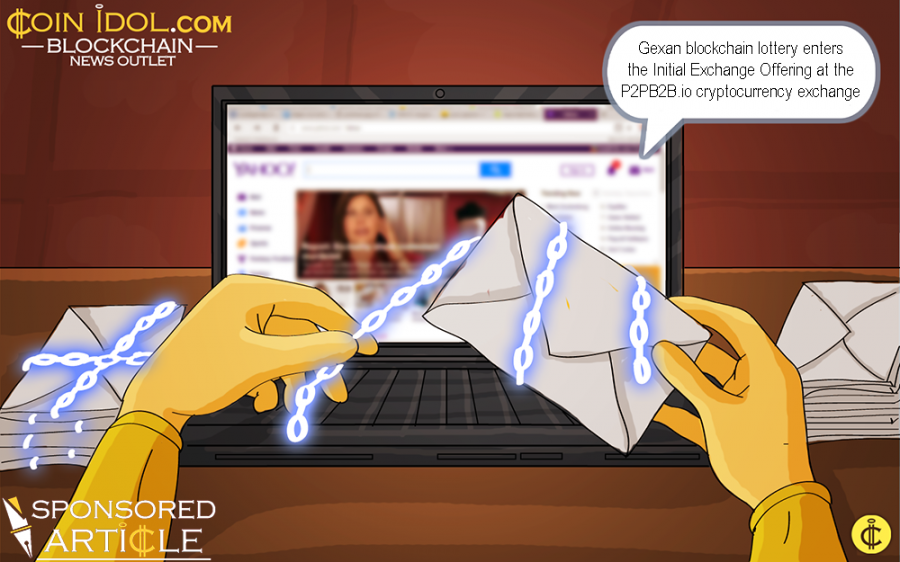 Moscow, Russia, May 7, 2019 -- The new Gexan blockchain lottery enters the Initial Exchange Offering at the P2PB2B.io cryptocurrency exchange on May 10, 2019.

Based on a hybrid algorithm, a combination of parameters will allow players to mine the lottery tickets by using their video cards or by investing in masternodes. This is a unique lottery concept that will appear in the market in the
near future.

The Gexan team has been working on the project for more than 9 months and is ready to present the results:

- the hybrid blockchain (POW+POS) with the ability to install masternodes

- the first lottery 5/36 based on the Smart Contract, which operates by using the web section of the site

The blockchain algorithm (Phi-2) is not among the most popular in miners. So, GEX will benefit individual miners or small pools of them, where the power of each miner will have an essential role.

Gexan's participants will also be able to install masternodes or just keep coins in their wallets for reception of new lottery tickets every day.

Participants can sell GEX coins received on the exchange or play the lottery with them. The Smart Contract randomly generates numbers and automatically makes payments to the winners.

According to the founder of the Gexan project, Artem Vakhrushev, "The fair lottery is possible only based on Smart Contracts. No one, not even team members, can change the rules of the game. The Smart Contract is integrated into the blockchain and remains unchanged there. However, its source code remains open and everyone can be sure in the transparency of the draw generated."

85% of the amount of tickets sold is distributed to the prize fund. This creates an interesting precedent, as it is commonly known that usually the lottery organizers retain most of the funds receipted.

By drawing conclusions, the new concept of the lottery looks curious; the model for mining lottery tickets is something new in lotteries.

This can benefit those who invest at the IEO stage. More will be covered on this in the near future.