The First Private Paper Currency on Blockchain ICO is Coming. Start of a New Financial Revolution? 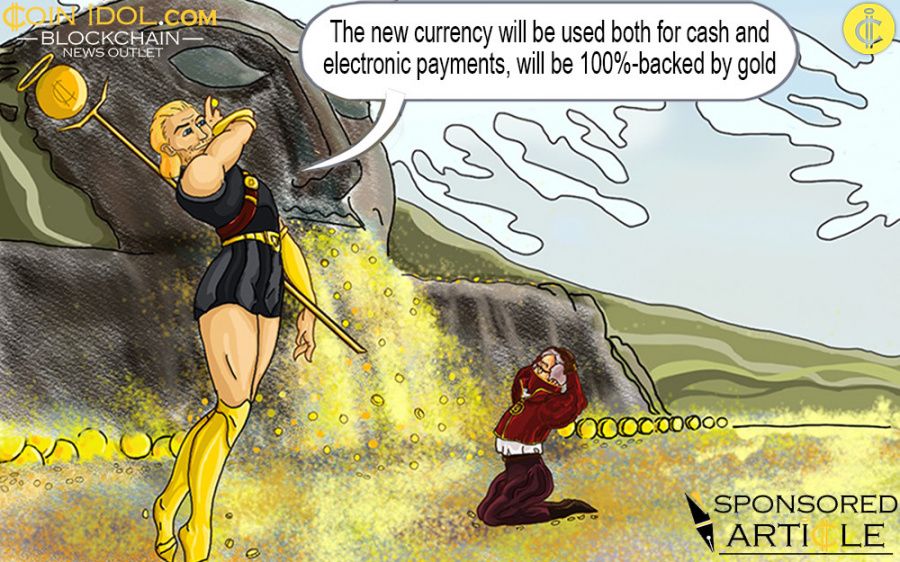 The project of the first global private money is planning an USD 200 million ICO (initial coin offering). The new currency will be used both for cash and electronic payments, will be 100%-backed by gold, will provide fast and cheap crypto currency and fiat currency exchange and payments, and will provide many other advantages to successfully compete with fiat money.

The name of the new currency that will be issued is Golden. The project involves not only the establishment of “private Central Bank” and issuance of the currency, but also all the infrastructure for it, including global bank network with ATMs, bank cards, POS-terminals and crypto-fiat-currency exchange.

The ICO of the project is coming in 2018, the seed round of financing is already started and will be live till April. According to preliminary valuation, the ICO could be one of the largest in the market with preliminary USD 200 million target. At the current stage the developers announced the start of the project to examine the demand, to start an open discussion of the project with the wide society and potential anchor investors – the aim of Golden Currency developers is to fulfill all regulations and investors demands to be able to conduct fully legal ICO on the markets, where such regulation is needed (for example, USA).

Nobel prize winner Friedrich August von Hayek in his book The Denationalization of Money in 1976 advocated the establishment of competitively issued private moneys and Golden Currency project is the practical implementation of Hayek ideas.

Now there is no money in the world that is fully backed by real assets, inflation-free and independent on political and economic situation of the country where it is issued. Crypto-currency also does not fulfill the function of money. Golden is planned to change it.

The Golden currency will be used for cash and electronic payments and wire transfers. The global network of Golden banks will provide online bank and phone apps with integrated currency exchange and global low-cost real time payments. Multicurrency accounts for users will provide the possibility of currency-agnostic payments and real time low-cost fiat and crypto currency exchange.

Golden is planned to be a stable, reliable and transparent currency, non-national and non-politicized perfect payment and investment tool, it will be convenient currency with independent modern infrastructure and easy payment and currency conversion, it will provide anonymity and universality of use (in any place of the world) as being present in cash.

And it will be fully legal…Starting from issuance and following its banking and exchange services – all of them will be working within the legal framework of the countries where they work.

Blockchain technologies will be widely used to provide transparency and stability. Blockchain proof-of-assets protocol, Ripple and other blockchain solutions will be examined for execution.

The project is developed by highly professional team, under the head of founders, experienced in execution of large and complicated projects.

All details on the Golden Currency you can also find on web pages of the currency at www.goldencurrency.world

Tags
ICO Blockchain Finance Money Payment Fiat Exchange Cash
Most Popular
May 15, 2022 at 14:48
PR
Decentralized NFT-Fi Platform SOLARR Raises $2M to Accelerate NFT Utility and Accessibility
May 15, 2022 at 14:31
Price
Chainlink Consolidates Above $5.50 as Demand and Supply Reach Equilibrium
May 15, 2022 at 09:49
Price
Dogecoin Reaches Bearish Exhaustion as Bears Overwhelm Bulls
May 14, 2022 at 11:30
Price
Uniswap Falls to $3.67 Low as It Reaches Deeply in the Oversold Region
May 14, 2022 at 10:31
Price
Polkadot Breaks Initial Resistance as It Targets the $14 High
More