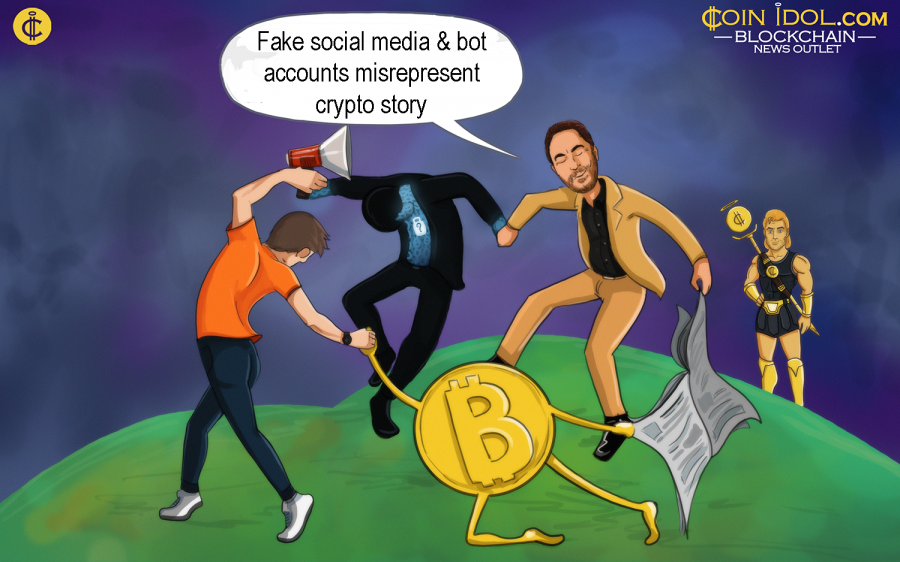 Several people in the crypto industry have assumed that participation on social networks is swamped with communications which are neither organic nor coming from genuine human activity. According to the new research, social media bots are somehow misrepresenting and misleading the cryptocurrency story. We have two categories of inauthentic accounts on the media, and these are bots and fake accounts.

These days, social networks have been largely infested by both fake accounts and bots. Because of this, media companies have been forced to take action on this matter. For instances, last year, Facebook blocked over 1.3 billion fake pages and disclosed that between 4% to 5% of its monthly customers (users) are actually fake. Also, Twitter has around 40% of its entire accounts fake. Google also placed a ban on crypto-related ads.

Anyway, it doesn’t matter whether an ersatz account on a social network is a fake or a bot – they all have a common goal and that goal is to give & spread propaganda, disinformation and deception.

Social Media has a Legitimate Place in Cryptocurrency Story

You can’t rule out the good job media has played to boost the crypto sector. Some platforms such as BitcoinTalk, Reddit have been allowing the community to gauge their feelings on various topics. Twitter, also offers a more generalized guise into the digital currency industry. Leaders debate out burning issues, amplify ideas and further expose myths.

Of recent, Geoff Golberg, a New York (NY)-based marketing & social media senior analyst, released a report, that reveals the dense existence of fakes and bots within the digital currency Twitter-sphere. Applying the very enthusiastic maniacs of settlement-focused crypto project, Ripple (XRP), Geoff indicated that a large number of the “XRP Army” is encompassed of fake accounts and bots.

With this particular data set, I was struck by the number of accounts which contain "xrp" or "ripple" in their usernames pic.twitter.com/DDu3qfVn7t
— geoff golberg (@geoffgolberg) May 11, 2018

The NY analyst is so inquisitive as to the number of microblogging platform Twitter users whose online username comprises the letters “XRP”.

Geoff discovered that a large number of the followers of the vanguard XRP Army identity were either bots or fake accounts, and these particular accounts were applied to like or retweet posts from eminent personalities in the community to depict potential popular support and also increase participation with the content.

It is not yet clear the funders, motives, and the owners behind these accounts, per se largescale, coordinated and organized campaigns need weighty resources to remain alive and active.

While responding to Geoff’s research report, one Twitter user said:

After the report by Geoff, XRP’s leadership showed interest of rectifying the problem. Nevertheless, since that time, he [Golberg] hasn’t heard from them again.

Ripple's CTO, @JoelKatz, mentioned to me in July that if "there's a real problem" with the XRP Army that he'd be "willing to deploy resources to investigate it"

Has been crickets from Schwartz since I shared data outlining the magnitude of the XRP/Ripple astroturfing efforts pic.twitter.com/bjlCJyI7Or
— geoff golberg (@geoffgolberg) February 6, 2019