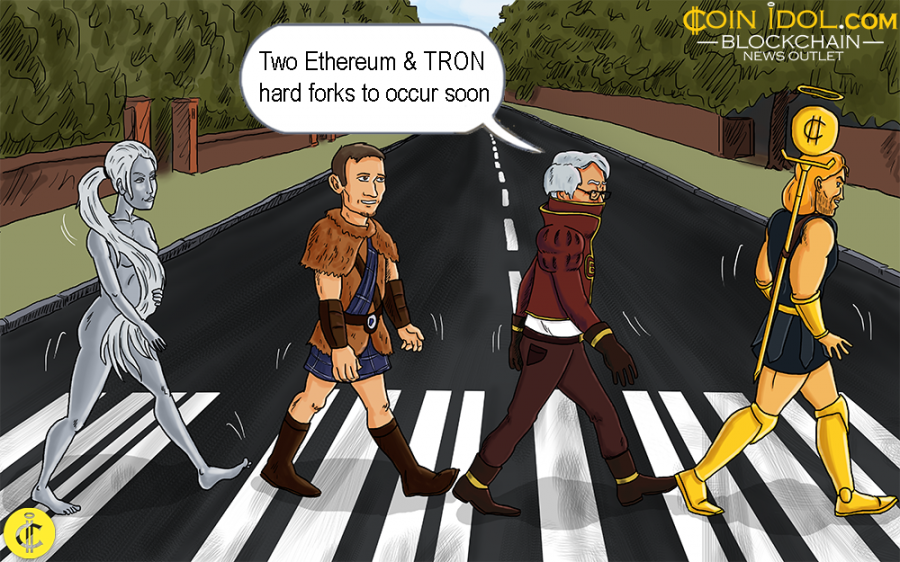 As February approaches its end, the cryptocurrency ecosystem is expecting two hard forks from Ethereum (ETH) this week: Constantinople and St. Petersburg upgrades. A TRON hard fork will also occur at the end of this month.

The February 22 announcement shows that both hard forks will happen at ETH block number 7,280,000 with developers anticipating that mining of the block will be at the end of this month. However, allowing for unforeseen mining situations, the set block could be attained two days before or after the set date.

Previously, Constantinople was set to happen at block height 7,080,000 which was attained on Thursday, January 17. However, there was a vulnerability that was raised and described just before the block execution of the key upgrade hence forcing the developers at ETH to suspend it.

The cryptocurrency community has been eagerly awaiting the Constantinople upgrade that was completed by the developers in the December 7, 2018 meeting. The anticipated hard fork will bring about 5 various Ethereum Improvement Proposals (EIPs) that will perpetually improve the blockchain technology with a lot of new backwards-incompatible upgrades.

This will eventually lead Ethereum nodes to advance to new software. An analogous plan led to the formation of Ethereum Classic after the DAO hack.

Nevertheless, the upcoming hard fork will not bring any change of activities and services offered to end-users since it is largely a “maintenance & optimization upgrade.” This upgrade will change the economic policy plus the fee system of blockchain and also lead its way to highly scalable dais.

Some giant cryptocurrency exchanges such as Kraken, Coinbase and Huobi have declared that they are in support of the hard fork.

Moreover, the St. Petersburg upgrade is meant to retreat and return back to a prior update - EIP 1283 from ETH’s test net.

Justin Sun, the head of TRON, also announced over the weekend that a Tron upgrade is underway. Through his Twitter account, he wrote:

The Odyssey 3.5 upgrade will also happen on Thursday, February 28. Justin promises it will have new facets like multi-signatures and account management for institutional clients. According to Justin, financial institutions appear to be interested in TRON, including hedge funds, conventional investors, etc.

Justin has for a long time been saying that Ethereum is the major threat to and rival of TRON, based on TRON’s daily landmark with stats produced by Ethereum in the same space, like dApps, TPS speed, registered customer accounts and others.