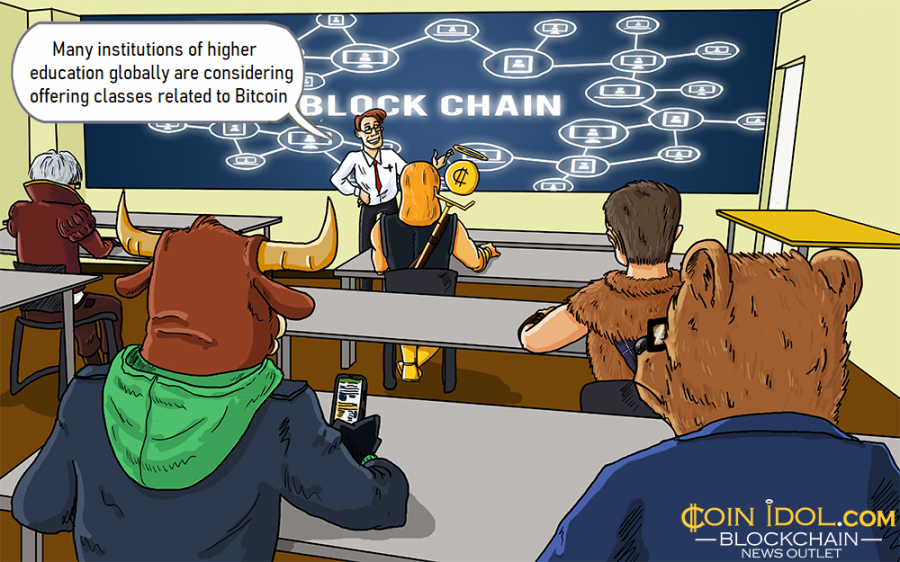 Many institutions of higher education globally are considering offering classes related to Bitcoin, cryptocurrency, blockchain and other emerging innovative technologies because of their much-acclaimed benefits.

This is a clear indication that students have started picking interest in discovering the potential of new disruptive innovations such as bitcoin, smart contracts, cryptoassets and other innovations emerging in the field of fintech. No doubt, the world is going digital at a very high speed, so it is now inevitable to avoid change. That is one of the reasons why students are now trying to adjust by taking classes of these trailblazing technologies such that they can fit in the changing community in the future.

Many giant companies have started entering into blockchain and cryptocurrency market, and they are on the hunt for professionals in these fields to help them build effective systems to serve their customers better. So if the students are well equipped with technological skills, they will be able to find themselves a high paying and noncompetitive jobs. Some companies recruiting blockchain engineers, executives and other experts include MasterCard Incorporated, Visa and others.

The demand for fintech developers and other specialties in this field grows daily. Moreover, they are offered good salaries that usually exceed that of the other fields. For example, in Russia, blockchain specialists are averagely offered 25% more money than other professionals.

According to a survey of 745 US students aged 16 and over, conducted by Coinbase, it is clear that the number of undergraduates that undertook a cryptocurrency or distributed ledger technology (DLT) course in 2019 is twice as high as last year. However, it is not true that these students are majoring in these fields, but they just did it as an optional (elective) course unit while learning their specific degrees.

The study further noted that almost 70% of bitcoin and blockchain classes are offered in the branches outside computer science, and they include law, agriculture, humanities, economics and others. Currently, 56% of the globe’s top-notch 50 institutions of higher education give no less than one elective course on DLT or cryptocurrency. Twelve months ago, the number was at 42%, so there is a major increase of around 14 percent in fintech studies.

Tags
Blockchain Cryptocurrency Education Bitcoin Technology University Fintech Smart contract Innovation
Most Popular
Apr 12, 2021 at 13:04
News
Ripple Is a Step Away From Outperforming Binance Coin by Market Cap
Apr 12, 2021 at 12:11
News
Ethereum Slumps Below $2,150, Unable To Sustain Above $2,200 Resistance Level
Apr 12, 2021 at 10:38
News
Bitcoin Breaks above $60,000 Support, Struggles to Resume Upside Momentum
Apr 12, 2021 at 08:15
PR
MyCryptoParadise Opens the Door to Trading Like a Professional With the Best Crypto Signals Being Offered Today
Apr 11, 2021 at 11:11
News
Female President of Tanzania Expected to Mitigate the Climate for Cryptocurrency in the Country
More