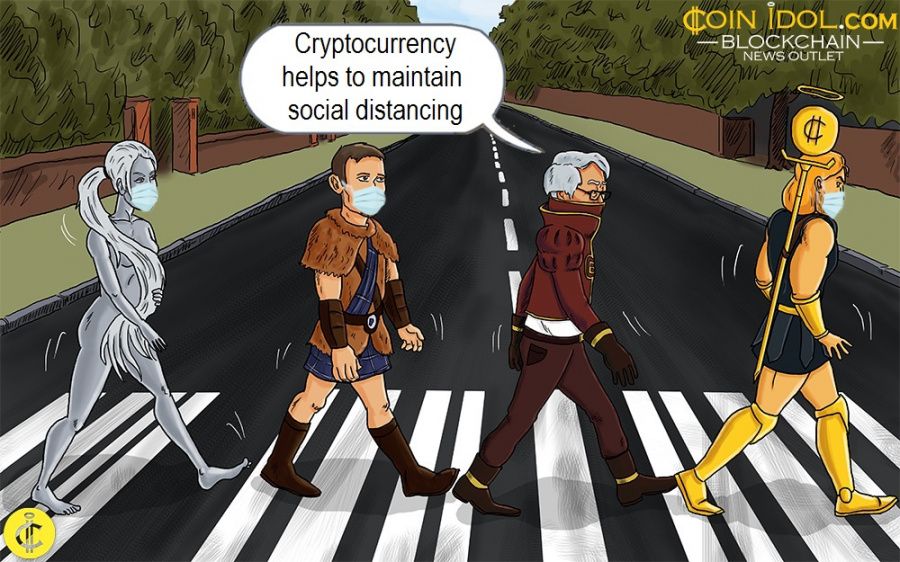 Who would ever think that coins can be used to halt the spread of diseases? Most of the people used to think that cryptocurrencies are only used for payments and investments purposes.

However, the global financial crisis as well as the outbreak of Covid-19 did much to change the financial space and fundamentally people’s trust in the banking structure. The invention of Bitcoin (BTC), the original cryptocurrency, by Satoshi Nakamoto back in 2009, has now caused more of a positive effect that it might have been expected.

Cryptocurrency provides another effective option of storing money and conducting payments minus depending on the traditional banking system and other central bodies. Most people have hidden their wealth in cryptocurrency in fear of inflation and the economic recession that has happened during and after the Coronavirus pandemic.

People no longer walk long distances to line up in banks to deposit or withdraw their funds, hence saving time and money. This has also helped to observe the social distance by avoiding the long lines on the money ATMs and inside banks, since financial transactions can now be conducted from home using cryptocurrency and other digital payment methods.

Many financial regulators, governments and central banks (CBs) have realised the benefits of digital currencies as they are exploring the potential of designing their own stablecoins and central bank digital currencies (CBDC) to replace traditional cash. For instance the US is developing the digital dollar and China is soon launching the digital yuan.

However, as per the report by the European Central Bank Eurosystem, if cryptocurrencies are used to totally substitute traditional money, it could lead interest rates to go under the zero-lower bound. By helping it to dodge the zero-lower bound (ZLB) and thus freeing negative interest rate policies (NIRP) of its prevailing limitations, a globe with only CBDC would allow for strong financial stimulus in a severe recession and/or economic crisis.

CB digital money brings a couple of alternatives for monetary policy, basically since variable interest rates on CBDC would offer for a new, non-redundant financial policy instrument that would enable the improvement of the entire efficiency of monetary policy.

Cryptocurrency is a potential option to cash

Some cryptocurrencies such as Bitcoin and Ethereum are possible alternatives to fiat money. Nevertheless, public blockchains don’t have enough processing power. In order to use it in the public sector, the control of regulators must also be strengthened.

The real alternative is the CBDC issued by the CB. The CB can distribute money through commercial banks or issue it directly to individuals. Experts including Tommaso Mancini-Griffoli, Deputy Chief in the MCMD at IMF, want the CBs to jointly issue and circulate the CBDC with private companies and commercial banks. The direct connection between the CB and the general public is a feasible model and the ripple effect will be significant.

But, if the central banks and other financial regulators don’t amend their monetary policies to include digital currencies, most people especially those who have tested the sweetness, convenience and benefits of cryptocurrencies, are more likely to ignore using traditional banks, hence cryptocurrency digital wallets and CBDC-accounts replacing the need for bank accounts in the near future.

Most governments and the World Health Organisation (WHO), have been advising people to reduce the use of cash in order to stop further spread of Coronavirus. Infected money notes can easily spread the virus from person to person. That means that people will have no other option but to use available, secure, transparent, effective and fast digital payment methods, of which cryptocurrency has all those qualities that the public want.

People have also been advised to stay and work from home. The cryptocurrency has helped people and the quarantined population to order goods and services online, and then pay using BTC and other accepted digital currencies. Some of the top countries/places that have seen an increase in the use of coins during this global crisis include Singapore, Australia (Brisbane), United States (California), Sweden, New Zealand and Liechtenstein. Generally, cryptocurrency has been a free vaccine that helps to maintain social distancing and thus shields people from acquiring this deadly disease.

Tags
Cryptocurrency Medicine Payment Money Banking Finance CBDC Digital currency Option
Most Popular
May 03, 2021 at 15:03
News
China Eyes February 2022 Beijing Olympics for Digital Yuan Launch but Is It Still Viable Amidst COVD-19 and Rising anti-China Movements?
May 03, 2021 at 14:17
News
Ethereum Rallies Above $3,000, Breaches More Resistance Levels
May 03, 2021 at 13:00
PR
Everything You Want to Know about Stellar, and Why it’s Getting Added to 1xBit
May 03, 2021 at 12:17
News
Bitcoin Reclaims $58,000 Support as Bulls and Bears Resume Price Tussle
May 02, 2021 at 11:54
News
South Korea Announces Testing of CBDC Right After Imposing a New Tax Framework; Is It a Coincidence?
More