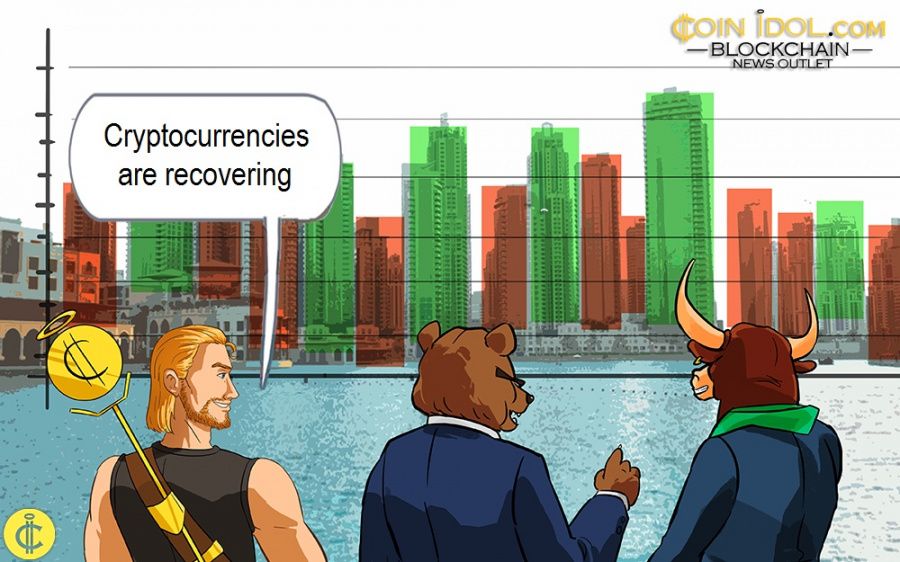 Monero is in a bull market as it breaks above $60 resistance. On April 6, XMR rebounded and reached a high of $60. XMR was overbought as price reached $60 resistance. The uptrend was interrupted as sellers emerged to push prices downward. Price reached $52 low and resumed fluctuation beneath the resistance. The market traded below the resistance for over two weeks. On April 23, XMR rebounded and broke the $60 resistance. Buyers broke the resistance but are battling to sustain the price above it. The coin is facing rejection at $62 as bulls are repelled on two occasions. Monero is likely to reach a high of $70 if the bulls overcome the minor resistance at $62. The crypto is above 75% range of the daily stochastic. It means that the market has bullish momentum.

Stellar had been in a sideways move since September 2019. The $0.0900 overhead resistance has remained unbroken since September. Buyers made three attempts to break it. In February, XLM sank to $0.0300 low and resumed an upward move. The crypto is moving up to retest the overhead resistance. This has been the market scenario since September. The resistance has never been broken, rather stellar trades beneath the resistance. XLM is at level 82 of the RSI period 14. This indicates that the price is in the overbought region. There is the likely tendency of the emergence of the bears to push prices downward. 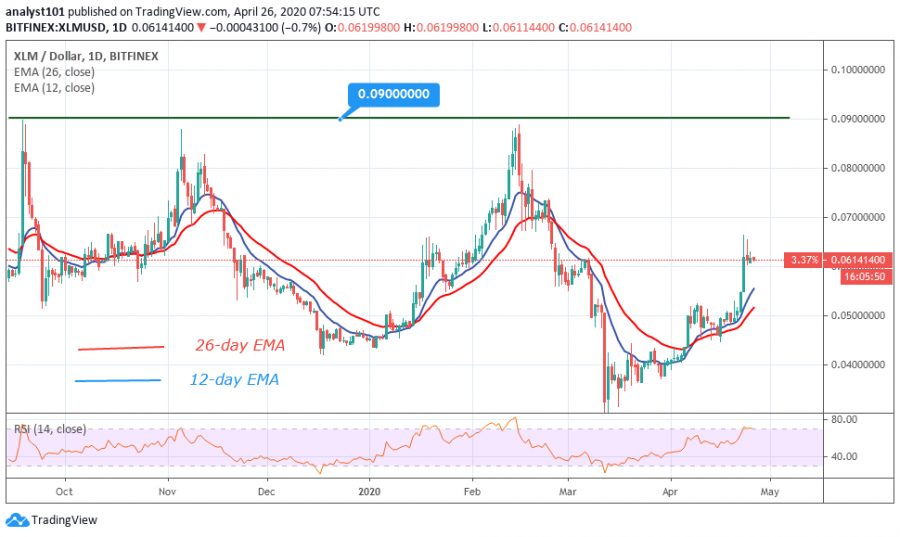 Zcash rebounded at a low of $38 and moved upward and reached a high of $48. ZEC reached the overbought region after an impressive run. Immediately, sellers emerged to push prices downward. The market fell to $41 low and resumed a fresh uptrend. ZEC is currently facing a minor resistance at $46 but consolidates above $44. Zcash will rally above $50 if ZEC rebounds above $44 low. The price may break through the $48 and $50 resistances and commence resumption of the uptrend. Conversely, if the bulls fail to push above $46 resistance, ZEC may fall and resume consolidation above $42. Meanwhile, price is above 60% range of the daily stochastic. 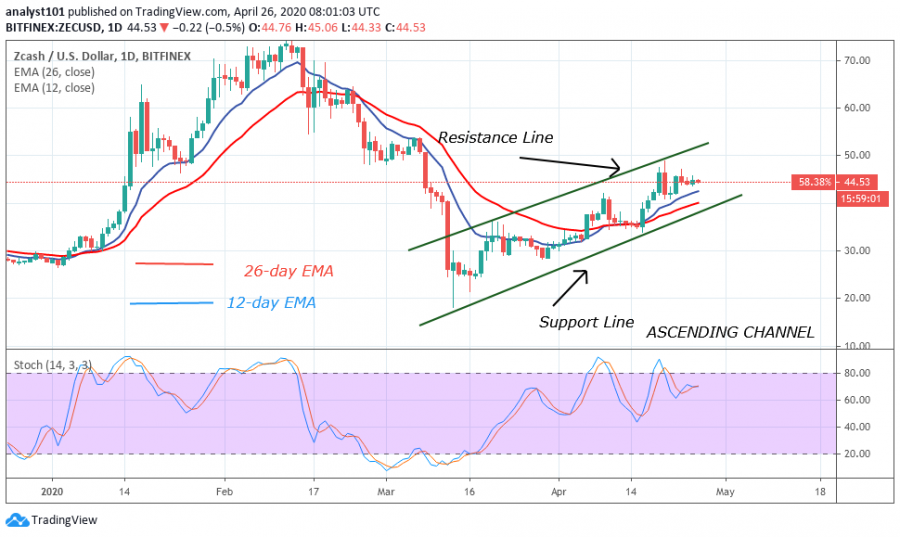 Bitcoin SV is in a bear market. After its last bearish impulse, the market fell to $100 low and resumed its uptrend. The bulls reached a high of $220 but were resisted. The resultant fall reached a low of $180 and to resume a fresh uptrend. Regrettably, the subsequent move was restricted beneath $200. The market has been trading below $200 as bulls find penetration difficult. In the last retest at $200, BSV was resisted as it fell to $190; the market is still consolidating above $190. Nonetheless, BSV is at level 53 of the RSI period 14. It indicates that BSV is capable of rising. 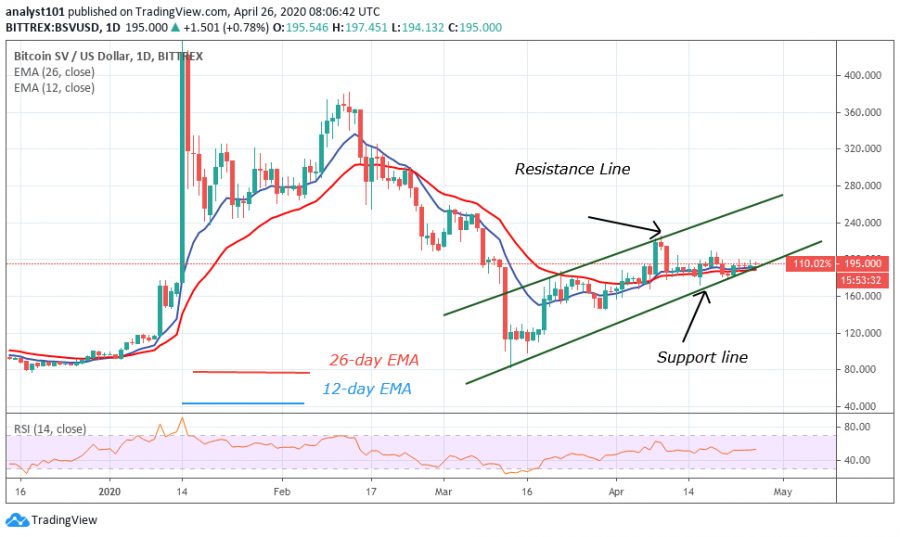 Chainlink is in a bull market. It has made an impressive move as it reaches a high of $4. With the recent uptrend, LINK is now trading in the overbought region. Consequently, there is the likelihood of the seller’s presence in the overbought region. LINK may experience a downward movement of prices. Presently, the market is facing the resistance at $3.90 as price falls to consolidate above $3.70 support. LINK is above 80% range of the daily stochastic. It indicates that the crypto is overbought and it may fall from the recent high 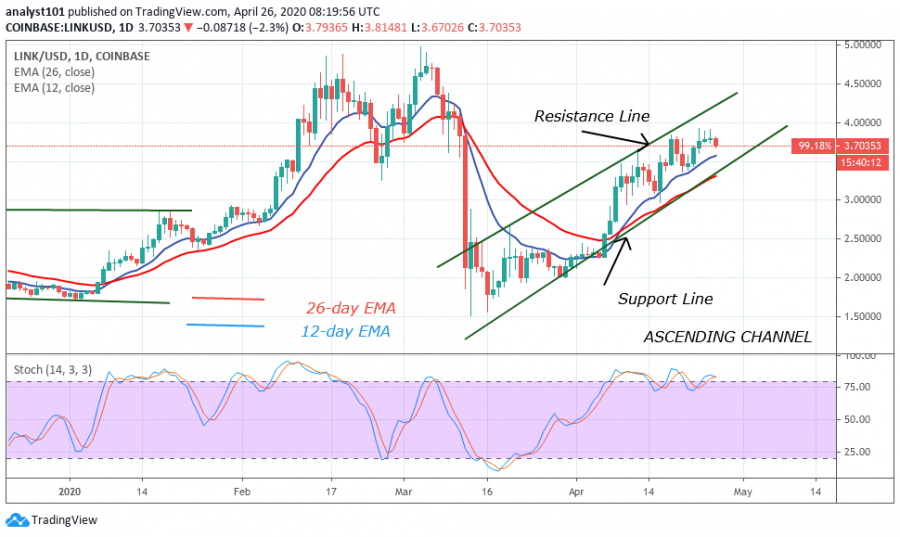 Tags
Cryptocurrency Bullish Downtrend Zcash Monero Stellar Bitcoin SV Bitcoin Chainlink
Most Popular
May 11, 2021 at 14:27
PR
VulcanVerse’s Marketplace Volume Triples from $5m to $15m, $20M Giveaway to Follow
May 11, 2021 at 14:02
News
Bitcoin and Dogecoin Prices Trending Up Following Hype from Mark Zuckerberg and Elon Musk
May 11, 2021 at 13:00
News
Ripple Consolidates Above $1.35 Support as Sellers Push to the Downside
May 11, 2021 at 12:11
News
Banks Are Getting Increasingly Tough on Bitcoin and Other Cryptocurrencies Amidst Mainstream Adoption
May 11, 2021 at 11:08
News
Litecoin in Minor Retracement, Eyes Next Target at $604 High
More