Cryptocurrencies Form at the Bottom amidst Bullish Expectations 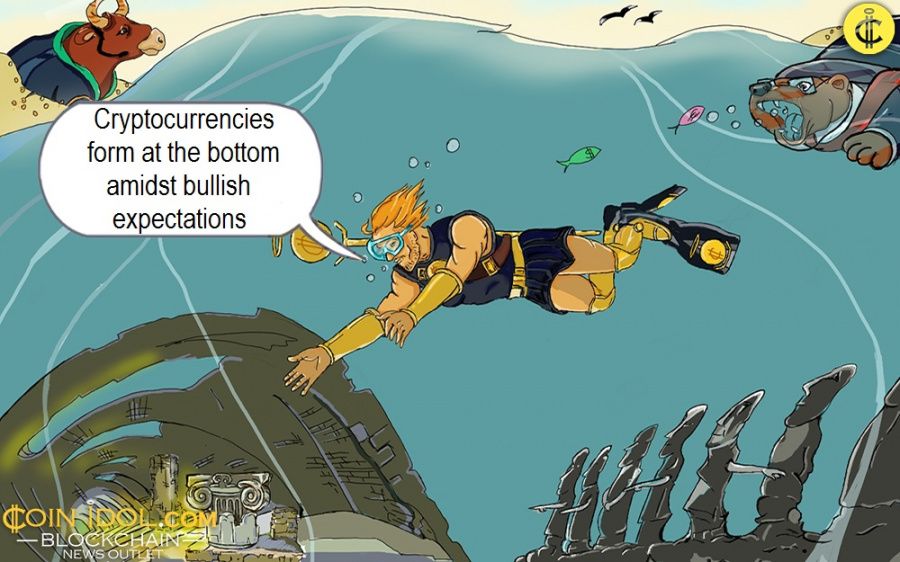 The cryptocurrency market has reached bearish exhaustion as Dogecoin and NEO have already shown. NEO has breached the resistance line and fled to the lower high. Lack of demand at a higher price level frustrated the bullish move. The downward move on Monero and Stellar may have been overdone as the coins consolidate at the bottom. ChainLink is in a range bound movement 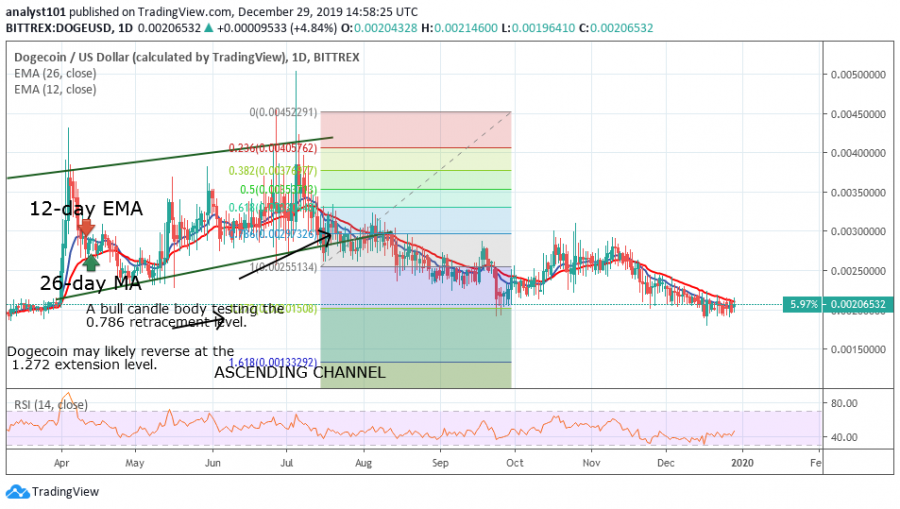 After a brief correction, DOGE finally dipped to the $0.0020 low in September. From the Fibonacci tool, DOGE tested the 0.786 retracement level which gave us a clue as to the extent of price fall. The tool indicated that DOGE will trade and reverse at the 1.272 extension level or the equivalent of $0.0020 support. Dogecoin is currently fluctuating above $0.0020. However, the downtrend will resume, if the recent low is breached.

Interestingly, the downtrend has been overstretched as the coin moves up. NEO has commenced the bullish move as the market breaches the resistance line while the price closed above it.

NEO rally up to $12 but pulled back to continue the bullish move but was resisted again.

Surprisingly, NEO slumped to the $8 low. 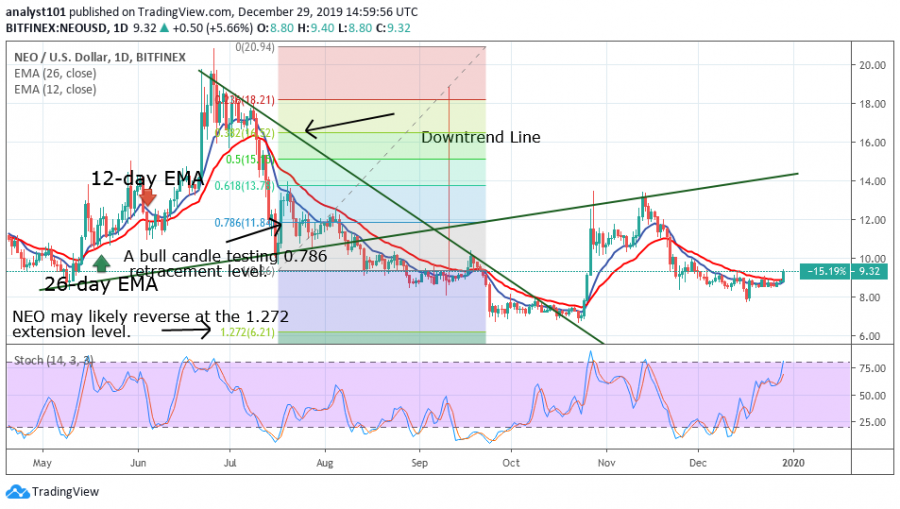 The bulls could not sustain hold at the higher price level because of a lack of demand. The bears’ dominance over the bulls can be checked if more buyers are introduced at current support. NEO is above 50% range of the daily stochastic which indicates that the market is rising. The Fibonacci tool indicates that NEO will reverse at the 1.272 extensions. NEO risks more selling if the recent low is breached.

Monero has been confined to a descending channel. The market is stylish as the bulls and bears tussle with the price and bears having the upper hand. Monero sinks as price breaks each previous low as the downward move linger on. Unexpectedly, the bears have overwhelming control as the coin dropped to the $45 low. 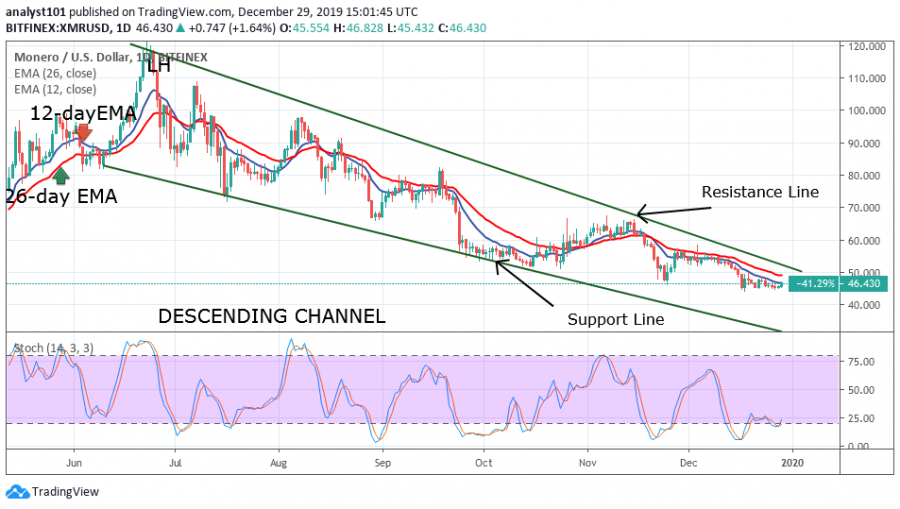 In quick response, the bulls’ pullback price to the lower high. Nevertheless, the bears are revisiting the recent low at $45 and commenced consolidation above it. Monero will rise if the support holds, and possibly the resistance line is breached. However, further depreciation is probable if the recent low cracks.

The coin’s bearish run has been dramatic. Stellar is presumed to have reversed after breaking the downtrend line and the price closing over it. The price corrected upward on two occasions before plunging back to the recent low at $0.054. The coin has found support at $0.045 and it is currently consolidating over it. Surprisingly, Stellar may rise if it breaks above the EMAs. 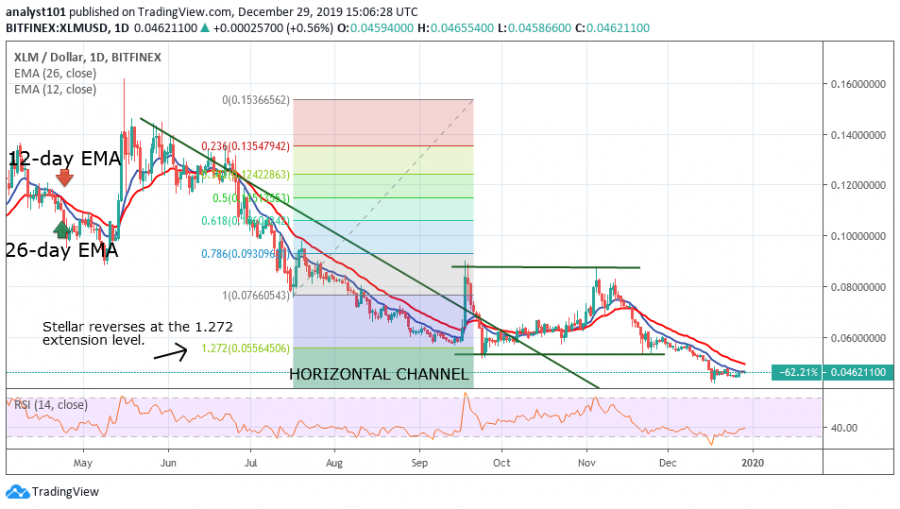 ChainLink was previously in a bull market but that was short-lived and was repelled at $4.0.

LINK dropped at $2 low and resumed fluctuations within the price range of $1.20 and $3

The EMAs are presently sloping horizontally signifying the sideways move. LINK can make an upward move if a breakout occurs at the resistance level; a rally is expected above $4.0. 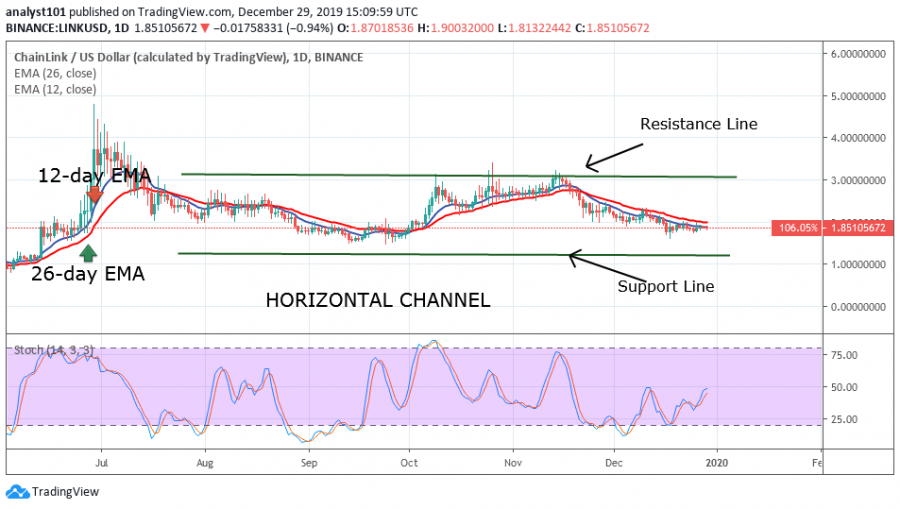