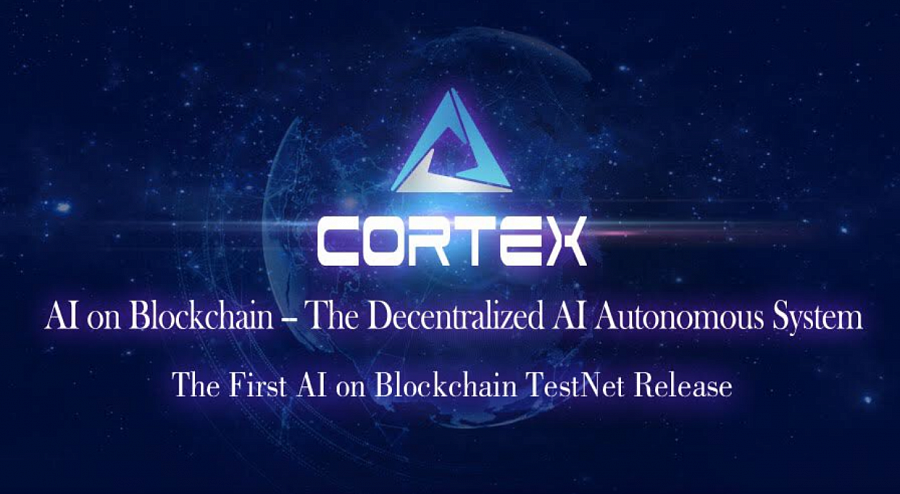 Cortex is a blockchain project that aims to provide cutting-edge machine-learning models in which users can infer via smart contracts on the Cortex blockchain.

The launch of Cortex TestNet is significant because this is the first time in human history that AI models have been successfully deployed on the blockchain. Predictive AI models have been around for some time, but overcoming the many challenges of integrating and deploying AI on the blockchain and allowing users to selectively use the models that best suit their needs has been a long-standing challenge. As the blockchain space grows, we expect to see higher volumes of data logged and recorded by blockchain projects. Being able to leverage AI for decision-making and automating contracts is an important hurdle to work on from now. The technology that Cortex is developing will help overcome these issues, as well as issues of limited computing capacity and flawed governance that have plagued decentralized applications from their inception.

Bernard and Dolores TestNet serve as a big milestone as this is the first time in the history of mankind to enable AI inference on the blockchain to showcase to the world.

Furthermore, Cortex is built on open-source technology, so the project will help democratize AI technology and bring it within reach of people and organizations both big and small. Preventing the monopolization of AI is an important cornerstone of the decentralized and democratic world that Cortex envisions for the future.

The timely launch of the TestNet is a testimony to the advanced technical expertise, excellent execution, and effective management of the Cortex team. The team is setting an exemplary standard for other projects in the industry to aspire to.

The Cerebro Block Explorer & Cortex Wallet have been released. With Cerebro, users can explore individual blocks and transactions, transaction histories, and address balances on the Cortex blockchain. The groundbreaking and revolutionary feature of Cerebro is that it allows users to add, explore, and invoke AI models via smart contracts to infer data, depending on the application or use-case that they need to fulfill. To use and interact with the Cerebro browser, the Cortex wallet will have to be installed.

Cortex has deployed 10 full TestNet nodes in 6 different countries to generate AI smart contract logs and inference results. More nodes will be added in the coming weeks and months, adding to the stability of the network. Users are invited to set up their own nodes by following these instructions.

The Cortex team chose the Cuckoo Cycle algorithm which is based on Proof of Work for network consensus.

According to the Cortex team: “We are a strong believer in one-machine-one-vote to allow more people to participate equally in the blockchain consensus. Cuckoo Cycle algorithm is selected as the consensus mechanism to allow commodity hardware to mine.”

The Cortex team ensures that common users can participate in mining, and that mining power does not become pooled by a few large ‘whales’ in the market.

Users who want to join a mining pool can connect directly to the Cortex mining pool and download the required software. A simple dashboard allows users to check statuses such as network computing power, mining difficulty, and block height on the dashboard, as well as set their mining and wallet addresses. 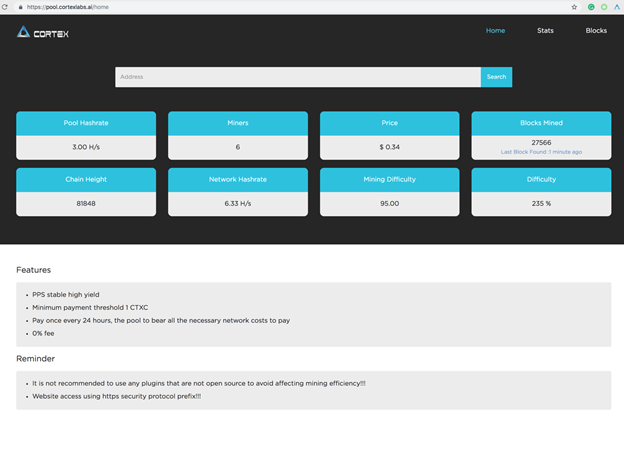 With the Cerebro explorer, users can find the most applicable on-chain AI models and build those into their smart contracts. They can even download AI models and data from full nodes for further improvement or analysis. AI developers, on the other hand, can upload their own AI models which will be submitted to the Cortex team for inclusion on-chain.

The CVM and Smart Contract Editing

Cortex has its own virtual machine, the Cortex Virtual Machine (CVM), which is backward compatible with the Ethereum Virtual Machine (EVM). Cortex smart contracts are written using Solidity, the same programming language used by Ethereum developers. An AI smart contract editor called Remix can be used to add any available AI models on-chain into new smart contracts, enhancing the functionality of the system as a whole. 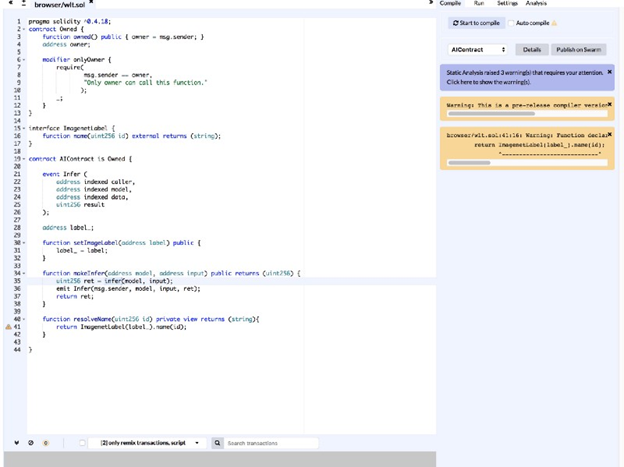 One of Cortex’s core technologies is the deterministic AI inference engine on blockchain, called Synapse. Synapse allows integer inference engine to perform deterministic AI inferences while guaranteeing exactly the same result of an AI model in heterogenetic computing environments. This is crucial in the Cortex blockchain because AI smart contract outputs must form consensus.

There are currently two high-quality AI models available on the Cortex blockchain. The first one, a Cat/Dog classifier model, has not only achieved promising results but has shown a lot of promise with respect to quantization and compression. Quantization is a concept in machine learning that combines lightweight inference with high performance, thereby allowing AI models to be executed with high levels of accuracy with low memory costs. Compression, as is commonly known, is the process of reducing the size and data usage of models. The original Cat/Dog model was over 500MB in size. An integer model was generated after transferring learning from the original model, and the size was first reduced to about 130MB and then to less than 15MB. After training, the accuracy under floating numbers was 94.21%, and the accuracy after full compression and converting to an integer model was 90.36%.

The second one is a digit recognition model based on the MNIST data set. It is able infer from a binarized image, giving a result of 0 to 9 with an accuracy greater than 98%. All these models eliminate the random factors in the inference process and can give deterministic results to reach inferred consensus on-chain.

These facts are non-trivial; they show that highly accurate and performant AI models can be deployed on the blockchain, and that they can even be optimized and improved in terms of memory usage and size without losing accuracy. This bodes well for future use cases in which highly advanced machine learning algorithms would be deployable on-chain in a cost and data-efficient manner.

Blockchain and AI developers are encouraged to follow Cortex’s progress here. Cortex uses AI to empower and enhance smart contracts, significantly boosting the applications, capabilities, and possibilities of blockchain technology. Cortex invites developers and AI professionals to join their ecosystem to help decentralize AI together. Institutions, companies, as well as individuals from all industries are welcome to join hand in hand and work alongside Cortex as the team uses AI and blockchain to help them with industrial upgrades.