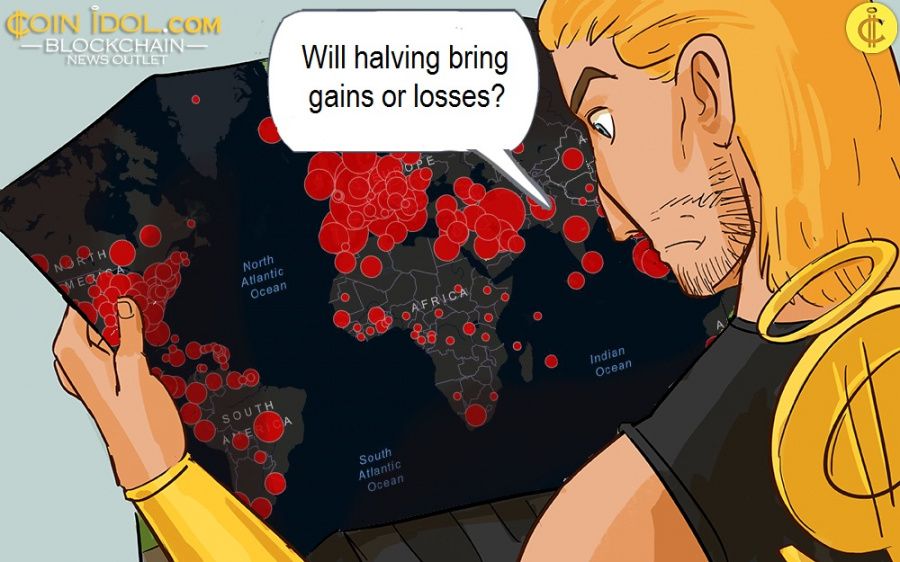 The Bitcoin halving draws nearer as it is expected to take place in just under two weeks, and the expectations for price increases among several cryptocurrency investors are extremely high, though the uncertainty of the current market might push it into a negative sentiment.

Previous BTC halvings have pushed the coin's rate sky-high, triggering most forecasts to be optimistic. However, there is one significant difference that makes everything quite uncertain. During the previous halvings, there was no COVID-19 forcing the entire world into a lockdown.

The Coronavirus plague caused high uncertainty among analysts making them hesitant about the forthcoming event. As of now, it is unclear whether Bitcoin will have a considerable influence on the regulatory and financial future of the cryptocurrency.

A crypto analyst, Christopher Jaszczynski predicts hyperinflation in the near future. The US money supply is currently going up in a parabolic move, enabling the dollar to increase to a record-high. Nevertheless, that monetary velocity is at rock-bottom as deflation of the US dollar (USD) is looming.

When the public starts spending the relief money provided to them, inflation will automatically set in. It will be accelerated by rising velocity, hence leading to hyperinflation. Besides, as the US is planning on printing more money as a quantitative easing, it is also possible to cause the devaluation of the US dollar, which might have a negative impact over cryptocurrency as well.

On the other hand, it might trigger the interest in cryptocurrency as traditional assets like the dollar will lose trust. Coinidol.com, a world blockchain news outlet, has previously reported that the father of McAfee antivirus, John McAfee, assumes that devaluation of the US dollar might force investors to turn to digital currency.

Bottom-down instead of sky-high

Most of the community has high hopes for BTC rates after the halving. As judged by the previous years, there are good reasons for such optimism. Some analysts including Dave the Wave, expressed expectations that BTC might touch $110K level in the long-term, while the short-term trend to settle around the $9,000 mark.

However, other analysts are less bearish. For instance, Scott Freeman, Co-Founder of JST Capital, a financial and crypto services provider, stated to Coinidol.com:

“Speaking to our customers, who include miners and institutional investors, the consistent message we hear is that the halving will be a non-event for the price of BTC.  This is consistent with what we saw with the recent BCH halving and also in-line with what one would expect if you believe in efficient markets.  The halving has been on everyone’s radar screen for a long time and as such the effect on markets should already be factored into the price of BTC.  The halving may affect the profitability of some of the Miners, but we expect at this point that every miner has already made adjustments to their business models.”

Another expert, Jose Llisterri, co-founder of the cryptocurrency exchange Interdax, said that 2013 and 2017, where the halving triggered the bull market, as a strong derivatives market was already in place for venture capitalists and crypto miners to avoid future risks or capitalize in future value. He described that the environment was considerably different from that of the year.

Indeed, as coronavirus pandemic rages worldwide, the market sentiment is quite unstable, which is proven by the halvings of Bitcoin Cash and Bitcoin SV that took place in April. Back then, many experts expressed opinions that the assets would spike in price. However, despite them actually spiked before the halving, the market has seen a plunge right after the event. This fact keeps the community alerted, as coronavirus could possibly trigger a similar scenario for Bitcoin as well.

Meanwhile, Trent Barnes of ZeroCap, a cryptocurrency and forex solution firm based in Australia, said that it is difficult to envisage accurately because of the existing economic situation, and anticipates extreme price volatility in the short term to pass through the halving.

While currently, BTC is obviously in a bullish trend, with its price hitting almost $8,200, the situation still seems highly unclear. To some extent, it resembles a 50\50 lottery, where you have equal chances for both win and loss.

Tags
Coronavirus Downtrend Cryptocurrency Bitcoin Halving Market Price Future
Most Popular
May 04, 2021 at 09:24
PR
Peer-to-Peer Internet ThreeFold Goes Multichain to Accelerate Token Accessibility
May 03, 2021 at 15:03
News
China Eyes February 2022 Beijing Olympics for Digital Yuan Launch but Is It Still Viable Amidst COVD-19 and Rising anti-China Movements?
May 03, 2021 at 14:17
News
Ethereum Rallies Above $3,000, Breaches More Resistance Levels
May 03, 2021 at 13:00
PR
Everything You Want to Know about Stellar, and Why it’s Getting Added to 1xBit
May 03, 2021 at 12:17
News
Bitcoin Reclaims $58,000 Support as Bulls and Bears Resume Price Tussle
More