Yes or No: Blockchain Tech, Cryptos & ICOs Predictions of Entire 2018 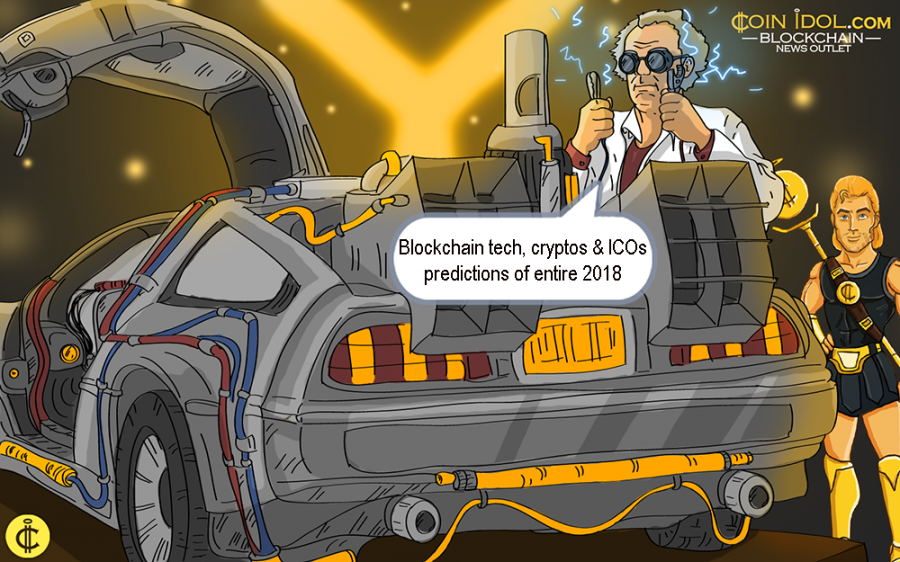 Just like any other significant financial market in this globe, the crypto industry has a lot of predictions and prophets of all colours. The year 2018 started with Bitcoin (BTC) trading around $15,000 which made several investors optimistic about the future of cryptocurrencies. Various forewarnings related to BTC didn’t come to pass by the end of 2018, although the majority successfully proved somewhat naturalistic. Let’s take a drive to some of them.

The former Goldman Sachs partner & founder of Galaxy Digital, Mike Novogratz, was somewhat correct in the predictions he made this year. In mid-December, 2018, following the heavy market plunge called ‘crypto winter,’ he revealed that the price of BTC wouldn’t dive more, remaining around $3,000 and $6,000, which is 100% correct.

However, his positivity about institutional actors penetrating the cryptoasset sector was apparently untimely. “I think the first quarter or the second quarter of 2019 if the institutions begin coming in, we will put in new highs,” Novogratz revealed in October. According to a recent report by coinidol, the dream of the Wall Street about cryptoasset is currently oblivion, since the value of cryptos has declined. The insiders told coinidol that the financial bulls like Goldman Sachs, Citigroup and Morgan Stanley retreated their plans until the demand is high again.

In June 2018, the geopolitical analyst at Geopolitical Futures, an online publication, George Friedman, revealed in an interview that distributed ledger technology (DLT) would one day at one time become disused and obsolete, noting that the nascent technology is just another craze.

Although George never mentioned the exact time period he was meaning, but as of now, DLT is far away from becoming obsolete. It appears that the ageing of DLT this year is similar to a dystopian science fiction movie but not the reality.

The mass adoption of blockchain technology is visible in many governments across the globe, as DLT is now being tested in various sectors. Some countries such as China came out to ban the use of crypto and ICO, but they have also come out to recognise the benefits of DLT and it created its private blockchain technology pilot zone.

Tom Lee, the co-founder of Fundstrat Global Advisors, this time around went offshore while forecasting the possible BTC rates. In January, he predicted that BTC will reach at $25k by the end of this year and he continued saying the same time and again throughout 2018. As per now, his prediction appears unlikely to happen.

Recently Tom came out to apologise saying that his position was a big mistake, first reducing the end-year level to $15k and later rejecting to comment on the BTC price.

Nevertheless, Tom is optimistic that the fair value of Bitcoin is far above its present price. Its only 2019 that will prove whether Tom is wrong or not.

Predictions Which Came to Pass

Todd Gordon predicted that BTC’s price will decline to $4,000 six months before the ‘crypto winter’. Right now, according to coinmarketcap, BTC is trading at $3,905.

Albeit, the second part of his forecast is still uncertain. For BTC to regain next year and exceed the $10k level once more is a matter of time.

The co-founder of Ethereum (ETH), Joseph Lubin, has recently said that the price bottom is over, explaining further on another tweet that was dedicated to scalability matters:

“The sky is not falling. From my perspective the future looks very bright.”

This very claim is albeit to be turned out right or wrong in 2019.

The co-founder of Block Tower, a crypto hedge fund, Ari Paul, made several predictions via Twitter in early 2018. One of them was about the BCH hard fork in November turned out to be 100% true. He said:

“Both BTC and BCH will continue to hard fork and >10% of the value of each (if held today) will reside in new offshoots.”

The BCH led a hash war and a big divide for the crypto, that saw creating BCH ABC and BCH SV. However, BTC hasn’t yet split and the year is almost coming to its end.

The senior managing director & head of ETF trading at Cantor Fitzgerald, Reggie Brown, is acclaimed as the “Godfather of ETFs.” Last month, the Godfather of ETFs said the BTC ETF won’t be approved very soon and indeed he was correct.

Brown’s prediction was later backed by Hester Pierce, commissioner U.S SEC, who is also hailed as the “Crypto Mom” by the cryptocurrency ecosystem. The commissioner cautioned the community to avoid holding their breath while waiting for the BTC ETF.

The president of Cboe Global Markets, Chris Concannon, revealed in June that class-action lawsuits are more than likely to deluge the firms behind ICO projects. He advised the ICO investors to remain on the pulse of the future regulatory figuring.

Months later, Chris’ words were certified by the SEC. Last month, the U.S regulator made its first legal penalties over two ICOs because they didn’t register their token sales, and this war has just kicked-off.