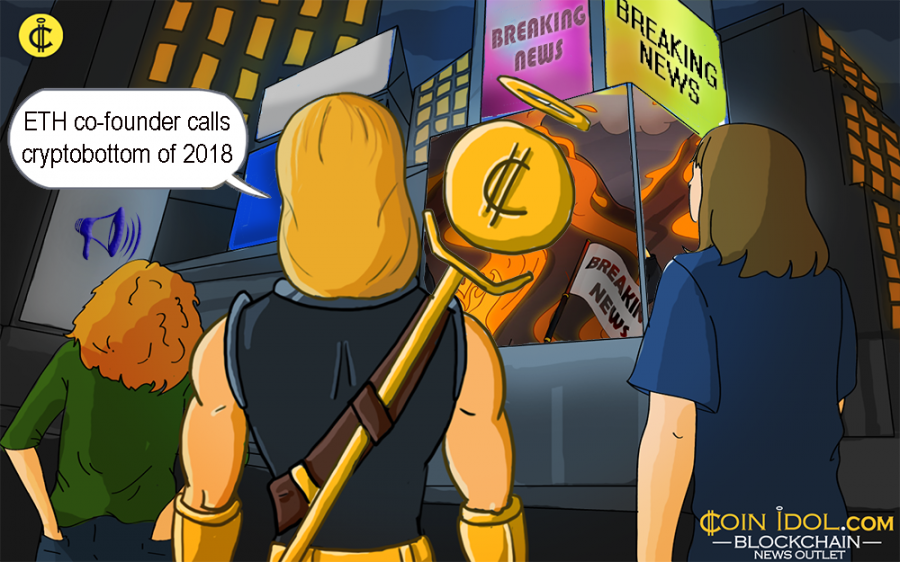 Ethereum (ETH) co-founder, Joseph Lubin, calls “the Cryptobottom of 2018.” He said this via a tweet on December 21, 2018. Last week was so fertile for most cryptos since their prices registered a significant surge and majority broke their resistance levels that were set previously.

The bottom of cryptocurrency market is noticeable by extraordinary fear, disbelief and uncertainty, explicitly from crypto & blockchain media and social commentators, that Joseph alludes to as ‘our colleagues in the 4th & crypto-5th estates.’ 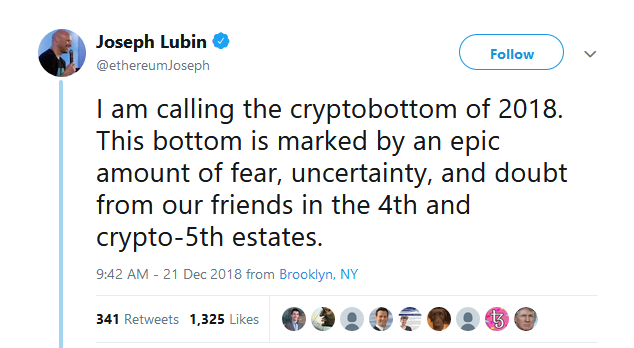 “ConsenSys remains healthy and is engaging in a rebalancing of priorities and activities which started about nine months ago.”

He noted that ConsenSys progresses investing in projects in its position as a distributed ledger technology (DLT) incubator and venture company and employing for internal projects which “remain essence to our forward looking-business.”

Joseph raised a complaint about the “momentous of halseny and pre-emptive paranoia” as for conditions journalists & bloggers lack exact data for, real insight into, or knowing of.”

While ending, Joseph repeated his optimism on the possible future of ConsenSys & ETH, noting:

“The sky is not falling. From my perspective, the future looks very bright. [...] Peaking [sic] into 2019, if you could see the landscape through my eyes, you'd have to wear shades.”

ConsenSys is whirling startups it earlier backed, and few of these startups lack the financial support. The number of workers to be let go is 50 – 60% out of 1,200 ConsenSys’ human workers. ConsenSys declared a reduction of more than 13 percent of mesh members. 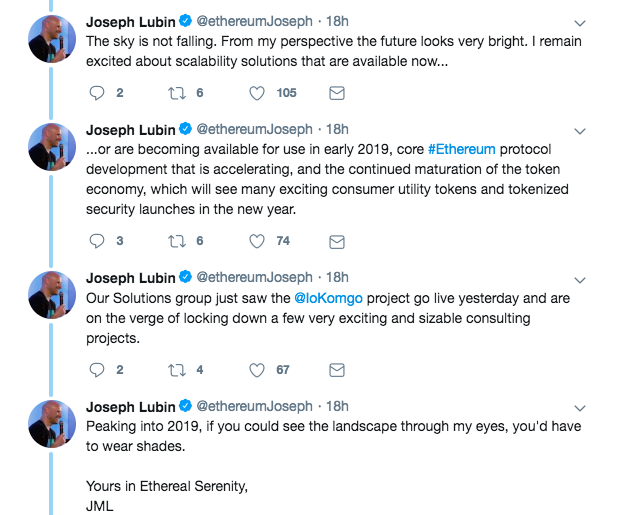 In September 2018, Vitalik Buterin, ETH’s co-founder said that there seems to be no possibility of crypto & blockchain tech industry will register ‘1,000-times development’ once more.

On this matter, Vitalik noted:

“Oh, I agree it was a bad to hire 500 people they couldn’t keep. That said, if that’s your angle, then the overlooked news here is that they’re getting *more* competent.”

Tags
Ethereum Cryptocurrency Price Blockchain Future Technology Startup Companies
Most Popular
May 13, 2021 at 11:05
News
Giant Telecom Companies Turn to Blockchain to Speed up Technological Progress
May 12, 2021 at 15:03
News
Cardano Consolidates Below Recent High as Bulls Attempt to Breach $1.80 Resistance
May 12, 2021 at 14:03
News
Most African Countries Cannot Access Akoin. How True is the One Africa, One Koin Sentiment?
May 12, 2021 at 14:00
PR
Spring and Bondly NFT Partnership Unlocks Digital Potential for Creator Economy
May 12, 2021 at 12:59
News
Bitcoin Cash in Sideways Move, Battles Resistance at $1,600
More