Blockchain Expected to Store 10% of Global GDP by 2027 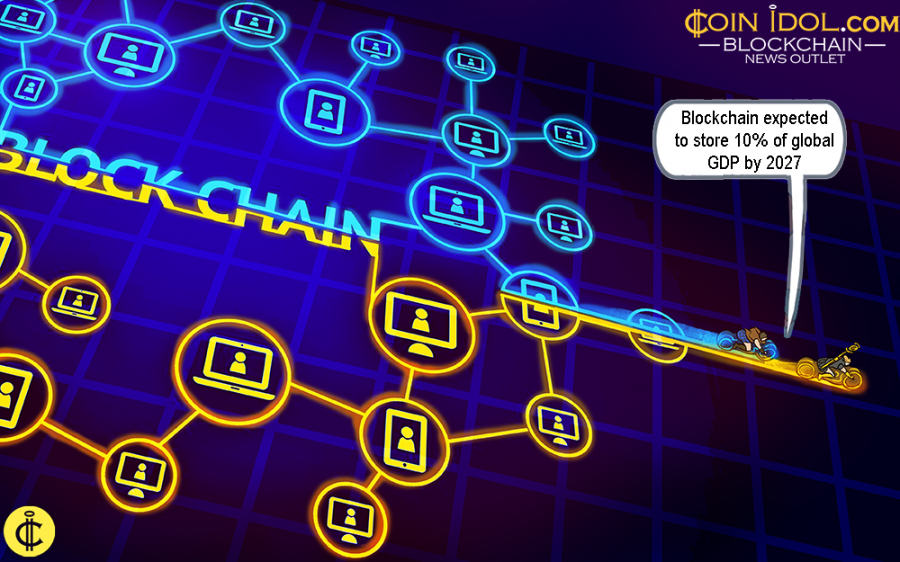 The U.S-based technology conglomerate Cisco published a report about Blockchain and revealed that the technology has the potential to store more than 10% of the globe’s total gross domestic product (GDP) by the year 2027. Blockchain will help in enhancing the internet of things, smart cities, and supply chain solutions.

The common question that is in people’s minds is whether the suggested trend will develop at that high speed.

Cisco predicted that blockchain in eight years from now, the technology will be highly trusted by businesses, firms, organization, institutions, governments etc as far as securing value electronically is concerned – even if digital currencies participate or not.

According to the report, international enterprises are expected to spend around $9.7 billion on distributed ledger technology (DLT) projects by the year 2012. In addition, by 2030, programmable commerce will make around $3 trillion in new business value.

Blockchain is a Revolutionary Technology

That’s a huge amount of money and it seems that the savings will grow as the technology matures. The businesses, customers, and every cryptocurrency enthusiast find this interesting. It indicates augmented adoption, legitimacy and a return to upside prices as DLT starts to get massively adopted.

Since DLT is considered as a revolutionary technology, it has the potential to ‘automate trust.’ This factor is an important ingredient in the industry and it has been discovered that 83% of Cisco’s executives believe that trust is the bedrock of the digital commerce (aka e-commerce):

“The true innovation of blockchain technology is its great potential to automate trust among the parties using it. Transactions are settled in a collective fashion and recorded on a distributed ledger, which removes the need for an established third party to create a trusted relationship. Parties can directly use the technology as the source of truth in place of one another.”

Cisco is not the first high-profile company to make such a projection, back in 2017, Deloitte – a multinational professional services giant - also predicted in a report dubbed “The future of asset serving” that blockchain will store almost 10 percent of the global GDP by the year 2025.

The co-founder of Ethereum & ConsenSys’ founder Joseph Lubin also projected that blockchain will store half of the globe’s wealth just within the next two decades. At this time, the entire global GDP is estimated to be standing at $80 trillion.

“Blockchain tech can enable producers to enhance track and trace of components and finished products across a supply chain and allow new applications around anti-counterfeiting, supplier and buyer financing,” the report says.

Blockchain technology has the latent to transform the industry by automating trust, improving transparency, and abridging business processes. Albeit, to release its max potential, the technology needs to be based on the created set of standards which meets the complex requirements of the enterprise.

Furthermore, today’s organizations, companies, businesses, governments are looking for industry-specific solutions to change their business processes and are require momentum plus the capacity to develop blockchain networks which are more interoperable.