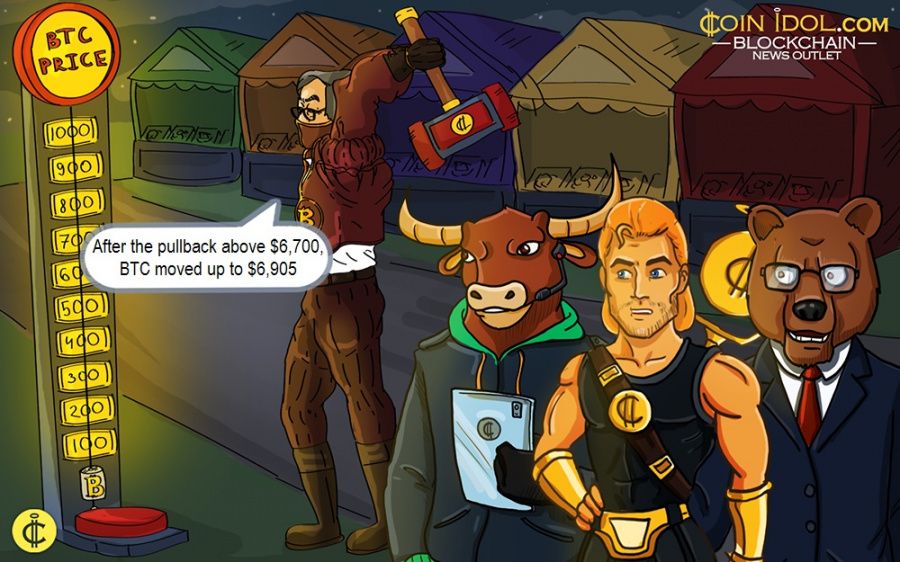 Unexpectedly, there was a sharp drop to $6,600 Low but the bulls pulled back. Initially, there was a second thought that the downtrend had just begun since Bitcoin was in the bearish trend zone.

Surprisingly, after the pullback above $6,700, BTC moved up to $6,905 at the time of writing. In the meantime, the price has been fluctuating between $6,800 and $6,900. As the pair recovers, the bottom line is to battle the $7,000 resistance and overcome it. Failure of bulls to overcome the resistance above $7,000 will result in a fresh downward move. Nonetheless, BTC is trading near $7,000 resistance.

The pair is at level 49 of the Relative Strength index. In other words, BTC is in the downtrend zone and below the centerline 50. The EMAs are horizontally flat indicating a range-bound movement. 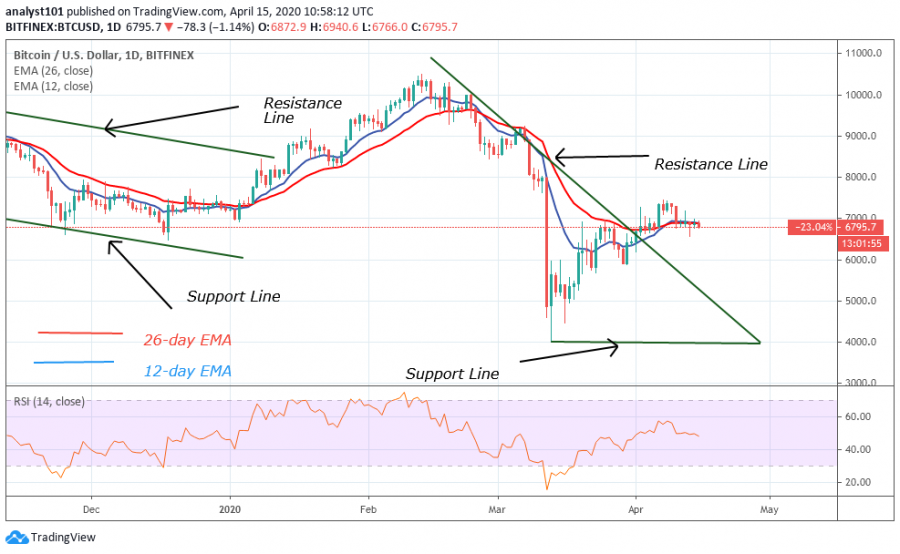 Last week, the pair was trading as high as $7,400 and as low as $6,500. Presently, the market is nearing the resistance zone. BTC will rise if the bulls propel price above $7,400. It will indicate strong buying by the bulls.

Tags
Bitcoin Price Trading Research Analytics Forecast Investing Cryptocurrency
Most Popular
May 16, 2021 at 11:30
News
3 Reasons Why Payment Service Platforms Switch to Blockchain, Facilitating the Adoption of the Tech
May 16, 2021 at 10:35
News
Chainlink Rally Stalls at High of $52 as Altcoin Retraces for More Upside Momentum
May 16, 2021 at 09:29
News
Uniswap Range-bound Between $36 and $44, Attempts to Breach Recent High
May 15, 2021 at 12:40
News
Low Orbit Crypto Cannon LOCC Lottery Draft Occurs Every Hour | Stake Once to Enter All Upcoming Drafts
May 15, 2021 at 11:20
News
Dogecoin Resumes Fresh Uptrend as Buyers Recoup Above $0.40 Support
More