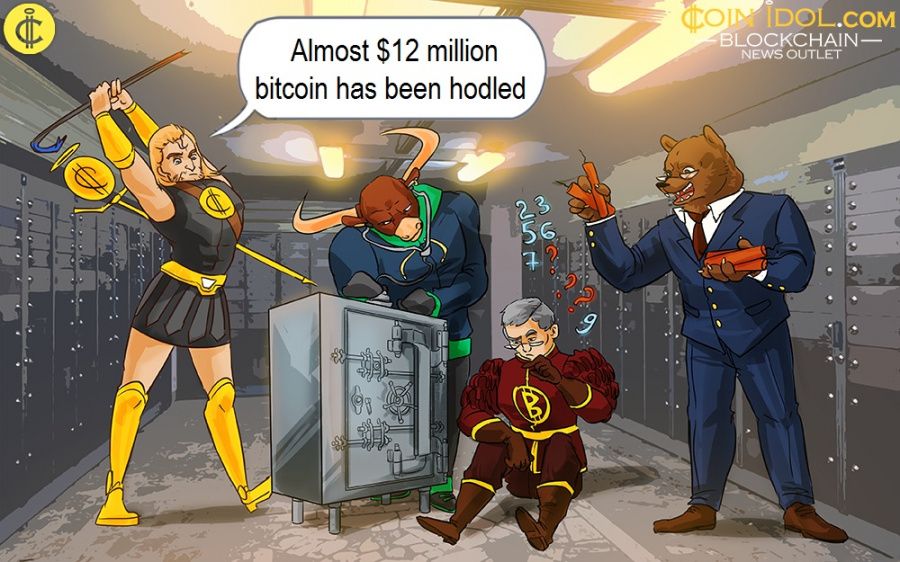 It has been more than a year now, since a grand total of around 11.6 million in Bitcoin cryptocurrency has been moved from one wallet to another, even when its price skyrocketed, hitting and surpassing the $13k level at one particular point.

One experienced cryptocurrency market analyst known as Rhythm issued an observation via Twitter revealing that 11.58M BTC is still dormant for over twelve months now. The price of BTC/USD surged by 85% within that period but still that amount of BTC was not traded, moved or sold at all. He tweeted that “Hodlers of last resort are insane."

Even with a 85% increase in price during that time, those millions of bitcoin were not sold or traded.

Almost 18 million of Bitcoin is currently in circulation and the inactive stockpile of the cryptocurrency can go up to about 65% of the present supply. There are various proposals that a good number of baghodlers notice a related feeling for BTC or an alike and comparable timeframe for trading (buying and selling).

Hodlers Where Are You?

Last year was a bad time for Bitcoin, it experienced a prolonged bearish market to that extent that the price of BTC reached as low as $3.2k (on Dec 15, 2018). Remember, at the beginning of the year, the world’s top digital asset was changing hands at over $13.5k, before things went bad. Actually, there is a day in July when Bitcoin ended the day trading at just above $4.1k and opened the following day with a $3.8k price. The only best price in 2018 was in point of fact when it traded at around $17.4k (on Jan 16).

One of the possible reasons why these hodlers have not wished to move their coins could be because of the cryptocurrency bubble that happened in december 2017, when the BTC/USD hit an all-time high of $20k and made the holders to get abnormal profits, therefore, this scenario made BTC holders to think that another record higher than that is coming soon. It’s now almost two years but Bitcoin is still moving sideways.

Another reason could be a natural factor – since these Bitcoin holders are human beings, some of them die, so if people who never revealed their private keys of their wallets die, automatically their coins will remain dormant. For instance, let’s assume that the owner of QuadrigaCX cryptocurrency exchange Gerald Cotton, had a big chunk of Bitcoins in his wallet, don’t you think that his coins are counted among these digital assets that are dormant?