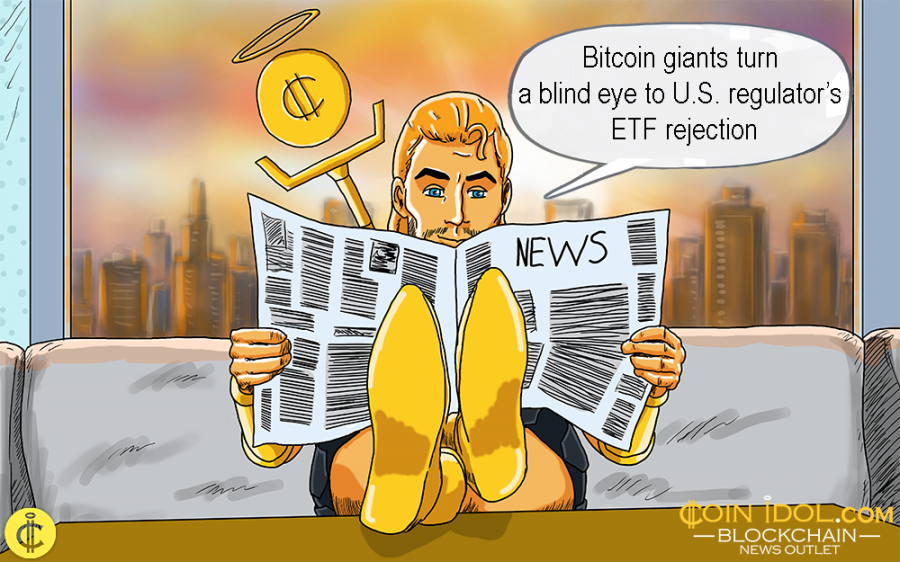 After U.S regulators rejected the  Winklevoss twins' demand for a Bitcoin Exchange Traded Fund (ETF), the crypto once more shows its resiliency and hardiness, staying above US$8,000.

On March 10 last year, the Securities Exchange Commission (SEC) rejected the Winklevoss Bitcoin Trust petition to freely commerce the first ever Bitcoin ETF. Nevertheless, the SEC, therefore, has given petition seeking a proper review of the denial.

Recently, from the second review that happened on July 26 last week, the SEC once again denied the listing of Bitcoin ETF. In case approved, the ETF would have been listed/traded on the Bats BZX, Inc. Exchange.

As a quick reaction to the SEC denial, Bitcoin's price dropped, shutting off the trading day at US$7,951. Nonetheless, on a day after, the crypto highly diminished its losses, returning back to a lofty of US$8,262.

Particularly, the SEC rejection shows a great repulse for Bitcoin's maniacs and investors. A lot of people hoped that the SEC's approval of a Bitcoin ETF could have activated a major bull run. In fact, Tom Alford, crypto expert & a trader, properly conducted a study and concluded that had it been for the Bitcoin ETF approval,  the price of BTC could have soared by 500%.

The SEC largely based its disapproval on Act Section 6(b)(5), that wants that the rules of a national security exchange be immediately made so as to control manipulative and hokey-pokey acts and practices and also to maximumly secure investors and the public interest at large.

That said, the SEC rejection wasn't unanimous (3-1). Becoming the first time in history, an SEC commissioner announced herself publicly to be more sympathetic to BTC.

Actually, not harmonising in opinion with the ETF rejection,  Hester Peirce affirms that Winklevoss' demand does fully satisfy Act section 6, and revealed:

“I am concerned that the Commission’s approach undermines investor protection by precluding greater institutionalization of the bitcoin market. […] More generally, the Commission’s interpretation and application of the statutory standard sends a strong signal that innovation is unwelcome in our markets, a signal that may have effects far beyond the fate of bitcoin ETPs.”

Chris Concannon, president and COO of Cboe, while reacting on Hester's statement, wrote:

“We are reviewing both the Commission’s notice and Commissioner Peirce’s dissent with interest.”

What's up next? A Bitcoin ETF is improbable as long as its occurrence is in the SEC's domain. Though for the majority of the cryptocurrency world, as Reddit user AsarJoe laid down clearly, Bitcoin doesn't require the approval of the SEC or any other regulator to effectively operate or even prosper.

Tags
ETF Exchange Cryptocurrency Demand Winklevoss SEC Bitcoin Price
Most Popular
May 16, 2021 at 11:30
News
3 Reasons Why Payment Service Platforms Switch to Blockchain, Facilitating the Adoption of the Tech
May 16, 2021 at 10:35
News
Chainlink Rally Stalls at High of $52 as Altcoin Retraces for More Upside Momentum
May 16, 2021 at 09:29
News
Uniswap Range-bound Between $36 and $44, Attempts to Breach Recent High
May 15, 2021 at 12:40
News
Low Orbit Crypto Cannon LOCC Lottery Draft Occurs Every Hour | Stake Once to Enter All Upcoming Drafts
May 15, 2021 at 11:20
News
Dogecoin Resumes Fresh Uptrend as Buyers Recoup Above $0.40 Support
More