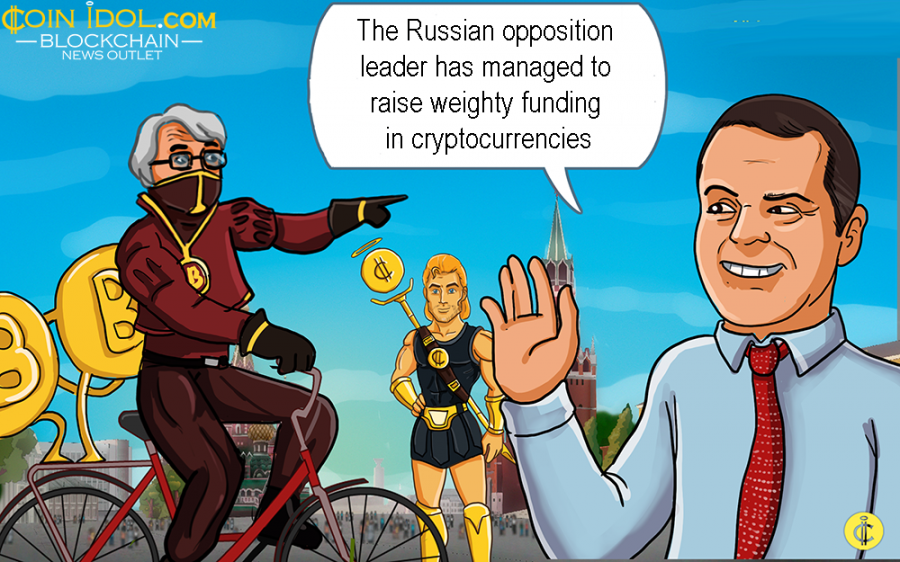 The main political opponent to Vladimir Putin, Alexei Navalny, has received donations of around 591 Bitcoin (approx. $3 million) since 2016. The Russian opposition leader has managed to raise weighty funding in cryptocurrencies for his political campaigns.

Regardless of the recent survey done by the state-owned Russian public Opinion Research Center (VTsIOM) which revealed that only 9% of Russians know something about Bitcoin (BTC) and cryptocurrency, it seems that Navalny is on top of things with this revolutionary technology.

According to the report, 56% of the citizens know about BTC and 18% have heard of the term cryptocurrency, but just 9% have a full knowledge of the cryptoasset.

In 2011, Putin’s political nightmare was investigated and probed by the government over claims of ‘wreaking material damage by means of deceit,’ according to the report by The Guardian.

During the investigation, the FBK denied receiving a large number of Bitcoin and cryptocurrency donations, at the time.

However, according to the latest data, the wallet address belonging to Navalny received more than 2,000 donations over the last 3 years. On April 23, he received around $10,000. The crypto funds leave the wallet as soon as they enter it, allegedly being converted into fiat currency especially the Russian ruble, dollars and euros.

According to Russian outlet ZNAK, large donations to Alexei have often coincided closely with publications on the part of Putin’s main opponent. For example, he officially released a report related to Vladimir Putin confidant’s British citizenship just few hours after his cryptocurrency wallet received around 20 BTC.

Bitcoin to Rule the World

As a matter of fact, the crypto community grows day-in-day-out on a large scale globally. Alexei Navalny is not the first presidential candidate to accept Bitcoin and cryptocurrency donations, the United States (U.S) presidential candidate of 2020 Andrew Yang (Democrat), also started his campaigns long time ago and his staunch supporters (voters) from across the country are giving him donations via Bitcoin and other major digital currencies. Yang also promised to create more effective regulation – cryptocurrency regulatory clarity – when voted into power.

So far, Russia is allegedly in its final stages of blockchain and crypto regulation program and may have a unique set of rules which ban its citizens from investing in Bitcoin and other cryptoassets and further ban citizens from using foreign crypto exchanges. When this effort is added on the suggested internet kill switch in the future, Bitcoin and cryptocurrency freedoms in the Russian Federation might be among the lowest in the globe.