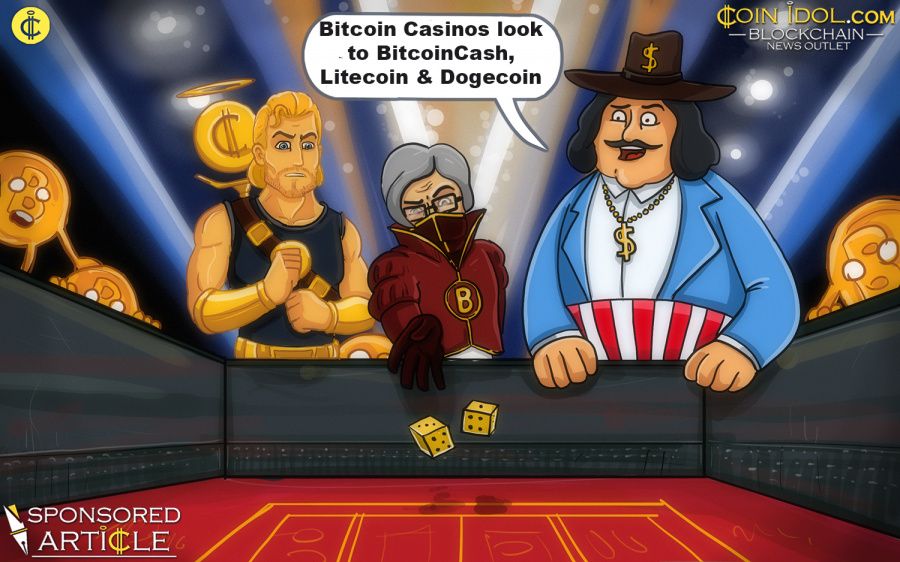 With Bitcoin being hampered by fees and longer waiting times for transactions in recent months, many services online that previously offered BTC payments have introduced various other cryptocurrency payment options. The most popular of these seem to be Litecoin, Ether, Dogecoin, BitcoinCash, and Monero.

For an industry like the online betting industry, cryptocurrency is a great innovation. Digital coin payments offer many advantages to both the house and the punter alike. These include better security, faster withdrawal processes, and decreased operating costs that can be passed onto the customer.

Initially, most cryptocurrency casinos exclusively offered Bitcoin. It was cheap to transact with, fast enough for the purpose, and absolutely dominated the market. It made perfect sense. Since then, a vibrant alt-coin economy has emerged. Different developers have tried their hand at perfecting Satoshi’s original vision. Some of the coins they’ve created offer greater anonymity (Monero, Verge, or Zcash), faster transactions (Litecoin, Ether), or just some other bizarre appeal (Doge). Since some of these qualities are useful to those partaking in online gambling, it’s only natural that the casinos would eventually offer them.

One of the most important qualities of cryptocurrency that appeals to operators of online casinos involves security. Typically, these service providers would be required to store extensive records about their customers on a centralised server. Included in this data would be all the information associated with any deposits the player had ever made. Considering some online casinos have millions of users worldwide, this is a particularly appealing honeypot for hackers. Those wishing to commit mass credit card fraud could do a lot of damage if they were able to comprise the security of one of these centralised databases. With cryptocurrency payments, this isn’t the case. All the casino could possibly store is the customer’s public key and the amount they deposit. There’s no need for them to provide their name, address, or card number. This hugely reduces the risk of a security compromise as all hackers could possibly gain from such an attack is whatever currency is currently being used on the site. Granted, this could be a large figure but thanks to other qualities of cryptocurrency that we’re about to explain, it can be kept to a minimum.

Thanks to the fact that cryptocurrencies do not require permission from a centralised source to authorise funds, waiting times on withdrawals are considerably lower at Bitcoin casinos. With traditional online casinos, the lengthy time to cash funds out to a given funding source incentivised players to keep large bankrolls online. This poses some risk as well as some inconvenience to the player since their money must remain in a fixed account and out of the customer’s control. If they want to play a few hands of poker every day, at a standard online casino, they’re forced to keep enough roll to play for a couple of days between withdrawals. This can be hard to estimate and, of course, requires the player trust the online casino.

The fact that crypto casino players can move their money quickly and easily means there is never a need for their bankroll to be left at a casino. They’ll therefore have more funds readily available to spread to different venues if they choose, or the coins they decide to leave in their crypto wallet are as safe as the level of security they’ve set up themselves.

As well as providing advantages to those wanting to move their money with greater fluidity and enhanced security properties, using cryptocurrency is often cheaper overall and is certainly less expensive for the casino themselves. This is because the players bear the brunt of the network fees. Depending on the cryptocurrency used, these can be negligible anyway. However, whether it’s an expensive, congested blockchain-based currency or a less popular but faster and cheaper one the fact that the casino does not have to worry about the fees means they can offer games with higher pay-out percentages and additional bonuses for loyal players. We don’t need to explain why this is advantageous for both the player and the casino alike.

Bitcoin and other cryptocurrency casinos often allow for better bonuses thanks to the extra revenue they can generate without the overheads of Visa and Mastercard fees to deal with. It’s not uncommon for players to receive 200% up to 1BTC as a bonus. At the time of writing, this is the equivalent of a “deposit $4,000 and receive $8,000”. Bonuses like this remind us of the wild west days of online gambling, when the industry was brand new. Such juicy incentives can and do pay-out handsomely every so often. These bonuses are often offered in a variety of cryptocurrencies. However, bonuses may vary due to the volatility of the underlying coins.

There are some specific perks to almost all alternate cryptocurrency to Bitcoin. Most people who choose one of the above digital coins or another such as Monero or Ether often do so because of the longer transaction times and higher fees that were associated with BTC throughout last year. However, thanks to recent network upgrades known as Segwit, both fees and transaction times are coming down quickly in the most popular and most truly decentralised cryptocurrency – Bitcoin. Additional protocol improvements are coming too. The Lightning Network has properties that would be particularly useful to online gamblers, allowing for multiple instant free transactions that are only settled at the end of a gaming session.

That said, until Lightning Network has gone through the necessary tested needed to unleash it on a multibillion dollar network, there do remain some perks to using an alternate coin. The lower fees of options like Litecoin or Ether are certainly attractive. Meanwhile, some players wish to remain anonymous and therefore Monero makes a good choice. Others still feel that the true version of Bitcoin outlined in the whitepaper called for all transactions to remain on the blockchain. These people would regard BitcoinCash as the obvious choice of digital currency. For now, it too offers cheaper and faster transactions, although many argue that the centralisation of those mining BCH makes it far less secure than the original Bitcoin chain.

Time and the market will tell us which of today’s (or tomorrow’s) cryptocurrencies make it as the preferred payment method. Each have different qualities, but none have quite the same network effect, decentralisation, or team of developers behind them as Bitcoin. The reasons why people are currently seeking alternatives to the original, immaculately conceived digital currency will one day hinder all blockchains that have not worked out a sufficient approach allowing them to scale to global demand. Currently, the planet’s best developers are working on the original Bitcoin and this seems unlikely to change anytime soon.