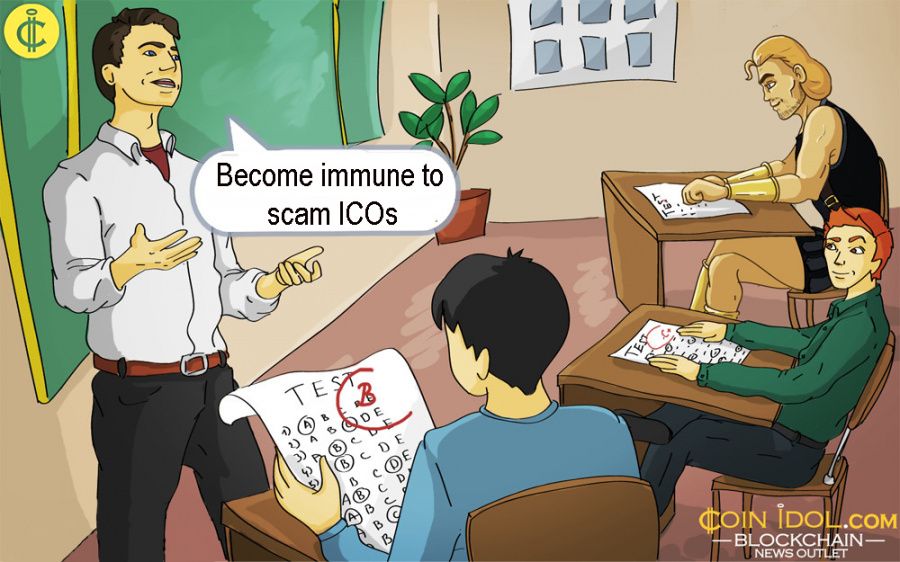 ICOs, or initial coin offerings, have been around for a few years now. However, it was only the last year when they stepped out of shadows and magnetized the attention of mainstream media, regulators, and, most of all, wannabe investors. The examples of astonishingly successful campaigns that managed to raise millions in a few minutes inspired lots of other ‘disruptors’ to run a campaign of their own.

Still, in the glut of innovative investment, scammers and other hardly-honest players have probably seen the chance of a lifetime to rid people of their money with little to no consequence. It’s hard to say how many scam ICOs are out there, considering the overall number, but it’s quite safe to assume that they’re abundant. These days, when potential investors have seen seemingly trustworthy projects go dark in a day, most scam ICOs look pretty much the same as legitimate ones. They, too, have whitepapers, attractive landing pages, teams and advisors, and so forth, thus making it almost impossible for an inexperienced investor to tell which is which and who is who.

Even though it’s hard to say if a project is a scam with one hundred percent certainty, there are some red flags one should heed.

Even in traditional investment, no one will ever guarantee you any profit. There can’t be any certainty in future revenues, and if a project claims their token will become more and more expensive over time, it’s quite likely that they’re lying. Of course, it doesn’t necessarily mean that they are wrong, however, assuring everyone in inevitable profit gain is very irresponsible, to say the least. If you see a project that claims that your profits will grow tenfold over just six months, it’s way more likely to be a good old Ponzi scheme rather than truth, as was seen in BitConnect.

“There is a very simple way to determine whether you’re looking at a pyramid scheme or not. If the project in question promises you returns that are higher than their product’s added value, you have all reasons to question the sources of those profits. If you discover that the gain of value comes from more people investing in the product, it’s a very definitive red flag. A responsible project always uses the investment funds to further develop their product, not to pay out some unrealistically high dividends,” says Sebastian Stupurac, WINGS Head of Operations, a company using collective wisdom and prediction market techniques to estimate the ongoing and upcoming ICOs.

So, no matter how this promise actually looks, if you see that the project offers you sky-high profits for literally no effort, it probably means that they want to make that profit out of you.

If the project is a scam, it would be really silly of its team to show their true identities. In most cases, they just find some pics online and use them as the images of their “Chief Financial Officers” or “advisors,” as was seen  in Empire Card who used a picture of French actress Sabine de Poncins, little known outside of France, as the portrait of their proud imaginary CEO Patricia Harrison. There have even been reports of Ryan Gosling “working” for a project as a designer under a completely different name.

Some scammers are, however, way more intricate. They know it’s quite easy to reveal a fake pic so they just hire people to pose as their CEOs, CFOs, and so forth. Rumor has it that certain scammers even pay homeless people to pretend they’re leading a disruptive startup to a bright and radiant future. This fraud is much harder to call out, but at least those guys help homeless people in some way, so here’s your silver lining.

“There is no way to know for certain that the people presented to you on the landing page are genuine team members. In theory, it’s possible that the project in question is the first one they’re involved in, so you won’t find too much of a backstory for them. However, if all of them are virtually untraceable, that’s a good reason to have second thoughts,” says Dominik Zynis, WINGS Head of Innovation.

So, what to do? Always check up every team member presented to you on the project’s website. Use TinEye or Google Images to see if the person on the picture is really what the caption says. Check all their social media profiles. See if they’ve been in the industry for a long time, or have posted anything relevant a year back. If you see that the team is completely inexperienced, and half of them even don’t show their real faces, that’s the red flag for you.

The whitepaper is often regarded as the face of the project. That’s where you, at least theoretically, find out what the project is all about, what they want to do, how they want to do it, and, most importantly, when. A decent whitepaper takes serious effort: thorough market research, design work, calculations, conceptual development, and lots of other things are integral parts of a good paper. As a result, writing a good whitepaper usually requires a lot of time (and sometimes money), which scammers cannot afford.

“Good projects are quite thorough about their whitepapers in a good way. If you have too many questions after reading a whitepaper, it definitely means that it was a bad one, and the project did not make an effort to be clear enough. It doesn’t matter if it was intentional or just a result of little attention paid to making the whitepaper, it’s still a bad sign,” says Dominik Zynis, WINGS Head of Innovation.

For that reason, if you see that a project’s whitepaper is sloppy, too generalized, or lacks any realistic roadmap, that should make you cautious. At very best, the project might not be a scam but they’re still not taking their work seriously enough. Nevertheless, usually, scammers either hire foreign students who don’t speak good enough English to write their whitepapers, which results in a cornucopia of hilariously silly errors or they just plagiarize someone else’s work, which is even cheaper (but certainly more obvious).

How the Project Plans to Spend the Funds

An honest ICO will always provide you with the allocation of the raised funds in exhausting detail. Importantly, most of the funds will go to finance further development of the product. Spending something on marketing or advisors is generally okay, however, if a project prioritizes payouts to some experts, lawyers, or even their own team, that’s an obvious red flag. Is it really a good project if it has to spend the lion’s share of its budget on lawyers?

“If the team really wishes to deliver a good product, they will make sure that you see it. If they use most of the funds for different kinds of rewards, it’s reasonable to ask: how are you going to finance the future of your product?” says  Boris Povod, Head of R&D at WINGS.

So, generally, it all comes down to the good old question: cui prodest, or who eventually benefits from it.

Finally, most projects present blockchain as a pill for every malady. But does it really make sense for that particular industry? Is it possible to implement the same project without a native token? Is blockchain tech a decisive factor in the final product’s infrastructure, or it could work pretty much the same without all those distributed ledgers and smart contracts? Does it really disrupt anything but your patience for the word ‘disruption?’

“It’s wise to have a critical approach towards any project that seeks to attract your investment. You cannot take the team’s word for granted. Even if you don’t have enough expertise to revise their code, which, of course, should be available for review at GitHub or someplace else, you still can check out some things. Go to the forums, ask the team, talk with other community members. Even if you can’t understand the code, you should check it out every now and then, at least to make sure someone is actually writing it,” says Stas Oskin, Head of Bizdev at WINGS.

Most projects that hold a decent ICO have something to show before you give them any money. It could be an MVP (minimum viable product), some strings of code, or at least some partnership with a respectable company. Any project that promises to use the raised funds for the development of a product is, at very best, trying to get some easy money. What they should do is develop their product further, not just start working on it.

Of course, these rules aren’t a golden bullet against scammers. As all those things become more obvious to the general public, scammers evolve to mimic decent projects with almost impeccable efficiency. Still, the most reasonable rule of investment isn’t about ICOs or IPOs, it’s just about your common sense: no matter what, never spend more money than you can afford to lose.