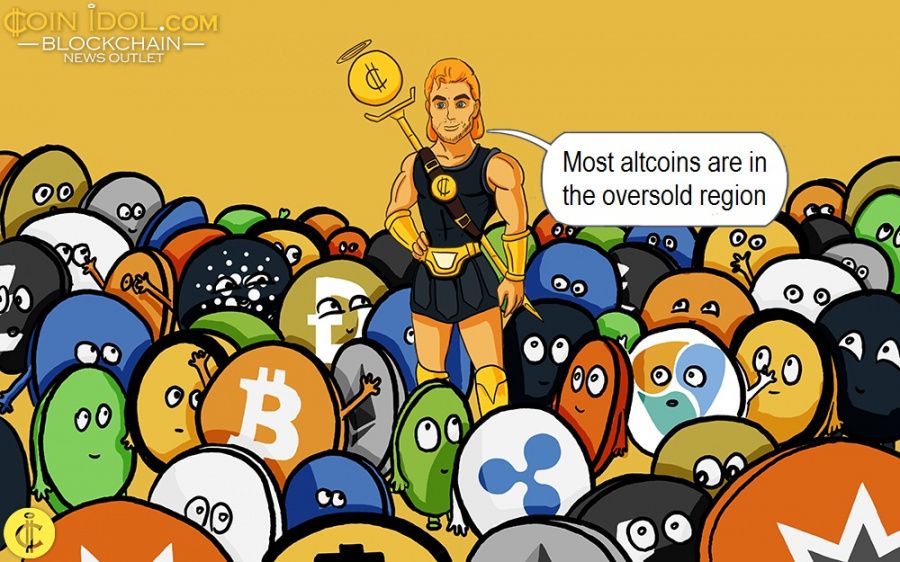 The cryptocurrencies are all in bear markets. The altcoins have reached the oversold regions. Consequently, the emergence of bulls contributed to the upward movement of the coins.

Bitcoin SV is in a bear market. The market has been on a downtrend after the resistance at $440. The selling pressure extended to $104 low. BSV was in the oversold region as it hit the low of $104. The presence of buyers at the oversold region pushed BSV to the resistance line of the descending channel. Technically, as the bulls break the resistance line, BSV should have resumed an uptrend. At the moment, the price is retracing, after which the upward move will resume. BSV is retracing to $120 low. The pair is currently beneath 80% range of the daily stochastic. In other words, BSV is in bearish momentum. 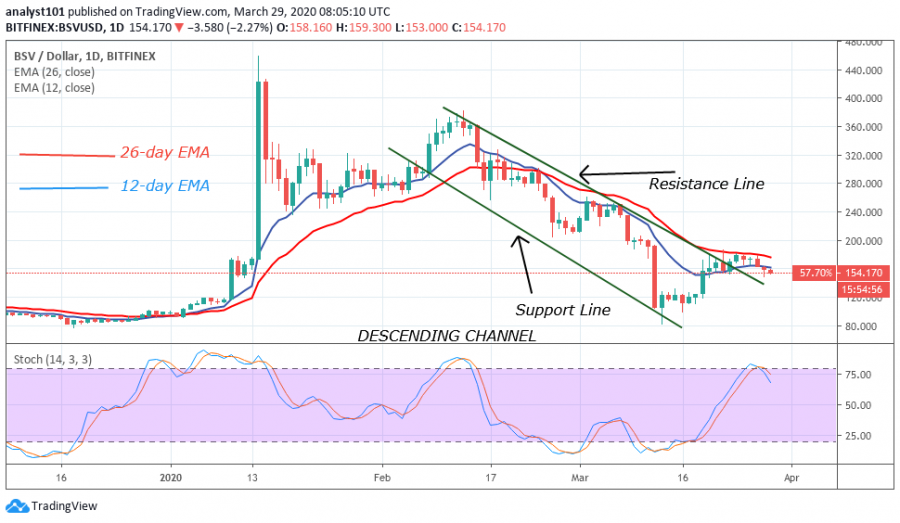 Cardano is in a bear market. In the last bearish impulse, Cardano fell to $0.022 low and resumed an upward move. ADA moved up to the high of $0.029 but it is currently facing the resistance line of the descending channel. At the price of $0.029, ADA is likely to go up or resume the downtrend. A change in the trend or an upward move is possible if the bulls break the resistance level. Cardano may fall and drop to $0.020 low if the resistance line remains intact. Nonetheless, Cardano has risen to level 40 of the RSI. This indicates that it is in the downtrend zone and below the centerline 50. It means ADA may fall. 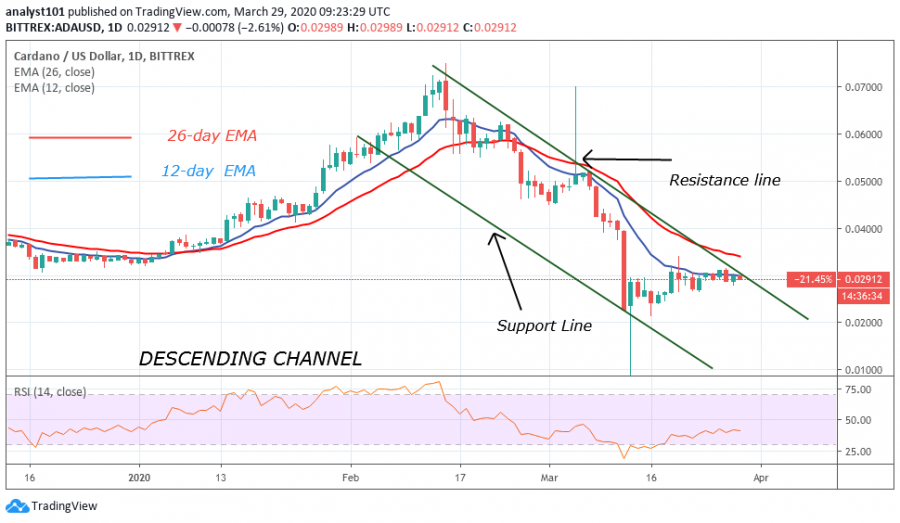 TRON was earlier in an upward move as the market reached a high of $0.0.26. At that resistance level, TRON reached the overbought region of the market. Consequent upon that sellers emerge to push TRON downward. The downtrend extended to $0.008 low but the bulls pulled back price. Buyers took control of price as the market went up again to the high of $0.0012. Today, TRON is trading at $0.1113 as at the time of writing. The coin is beneath 75 % range of the daily stochastic. The bands are making U-turn indicating bearish momentum. 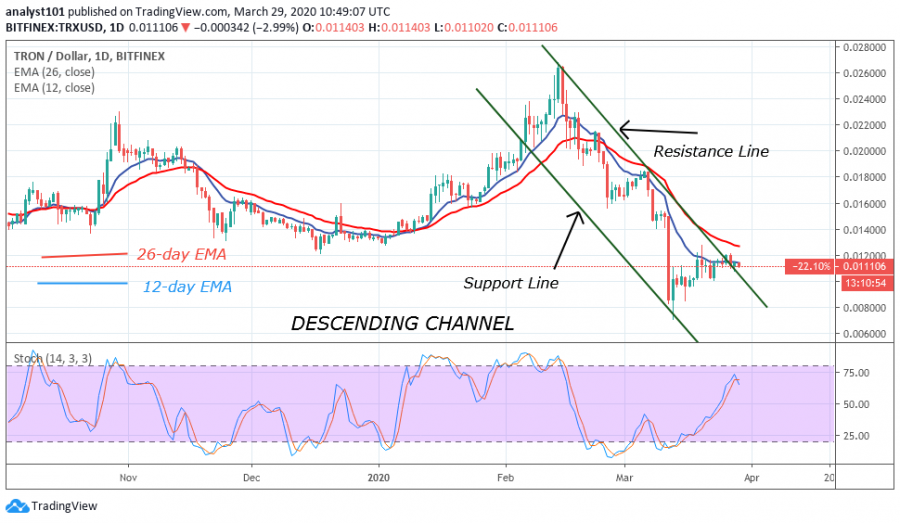 The pair is in a sideways trend. In January and February 2020, the bulls have been making concerted efforts to break the $140 overhead resistance. Nonetheless, after two unsuccessful attempts, the downtrend resumed and the market fell to $40 low. DASH fell to an oversold region of the market. As usual, the bulls emerge to push the pair upward. The upward move is ongoing but DASH is facing resistance at $70. DASH is currently at level 43 of the RSI. In other words, DASH is in the downtrend zone. 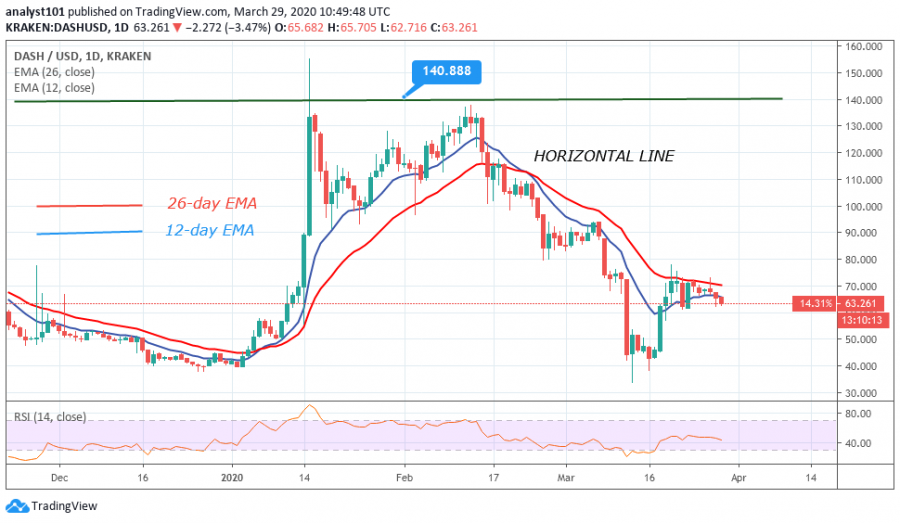 EOS was earlier in an upward move as the market reached a high of $5.50. The pair was overbought at a high of $5.50. Consequently, sellers emerged to push EOS downward. The downtrend extended to a low of $1.50. The bulls pulled back and resumed an upward move. The upward move is currently facing the resistance line of the descending channel. EOS has the chance of a change in trend if the bulls break and close above the resistance line. Conversely, if the bulls fail to break the resistance line, EOS will fall to $1.50 low. EOS is beneath 75% range of the daily stochastic. The stochastic bands are making a U-turn indicating bearish momentum. 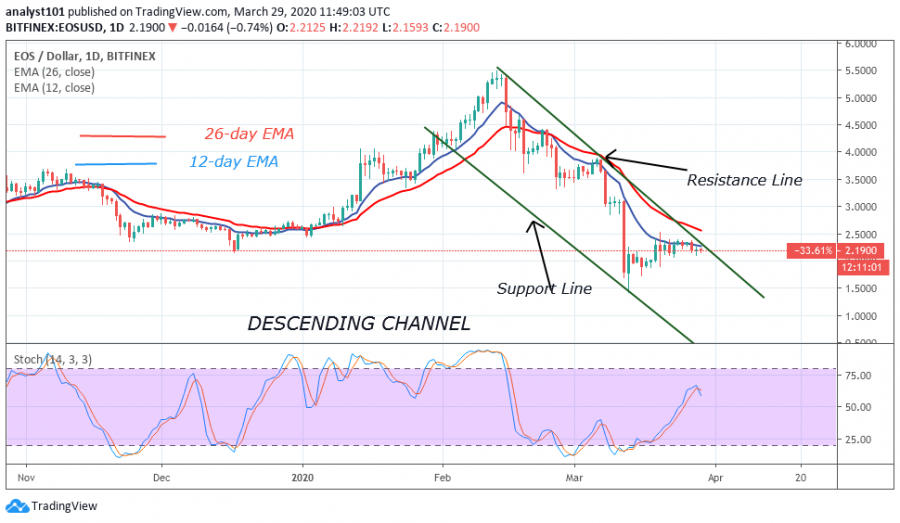