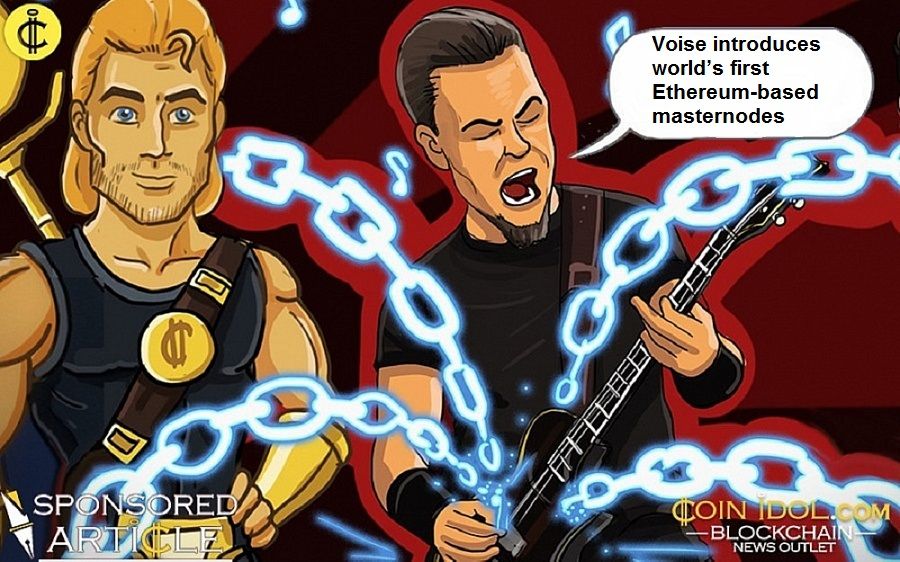 Music sharing blockchain-based platform Voise continues to find ways to increase the value of its native VOISE tokens, with an upcoming launch of Masternodes on the Ethereum blockchain as well as a VOISE token burn. With masternodes, token holders will soon be able to access extra services and generate additional revenue, while the 50 million token burn should see an immediate impact on demand, resulting from a total supply decreasing by about 8%.

Music sharing innovator Voise announced these major developments in its latest round of updates aimed specifically at enhancing its potential as a revenue-centric platform with ever-increasing value for its native digital currency, the VOISE token. Since launching its alpha version in October, Voise has not stopped delivering new achievements, forming significant new partnerships that serve to strengthen its reputation as a serious player in the music industry and blockchain sphere. At the same time, Voise has not lost sight of its supportive community and token holders, whom it regards as its most important partners.

After taking into consideration the detailed feedback and input from its community with regards to longer-term profitability, Voise has taken the decision to move on with the masternode launch and token burn. VOISE token holders will soon be able to set up their own masternodes, earning a percentage of revenue based on the number of tokens committed to be locked in for masternode operations.

To operate masternodes and earn the minimum revenue, users must lock in at least 600,000 VOISE tokens for at least 30 days. Once these committed tokens have completed the minimum lock-in period, they can be unlocked and revenues generated will be received by operators. Smart contracts executed on a special decentralized application (dAPP) will govern the entire masternode operations, from receiving, locking and unlocking, and revenue distributions.

This means that all revenue will be secured against unauthorized access, as all DApp smart contracts self-execute from a back end run on the Ethereum network. Not even Voise developers will be able to access them. For now, Voise commits that 80% of all income generated will be distributed to VOISE token holders. Voise is ready to meet that commitment by paying the community from the foundation’s fund, should the income from initial months of revenue fall short of this commitment.

How Voise will Disrupt the Online Music Industry

More than 110 million listeners are willing to pay for their music online, resulting in unparalleled growth of the online music industry. Yet, for independent artists, the centralized world of high commissions and unfair revenue distribution persists.

Unlike its predecessors, Voise’s own attempt at decentralization will focus on simplicity, ensuring the average music listener can use it easily, while providing value to crypto users, with a platform that enables fiat and crypto. Whether it’s popular music, top downloads or thematic variants, users can access all of these through the platform, while discovering new performers and learn about Voise developments from Radio DAO. Artists, on the other hand, can earn any amount they want from music they upload, or choose to ask for donations instead through a profile section that also doubles up as a promotional pad.

On the business side, Voise has partnered up with the likes of MicroMoney and Coinomi, while on the music side, it has secured endorsements from Grammy nominee Carolyn Malachi and DJ sensation Jinco. With its present membership of the Ethereum Enterprise Alliance, Voise has direct access to the world’s best Ethereum talents and Fortune 500 brands.

With successful listings across several exchanges, such as Bit-Z, CoinExchange and Cryptopia, VOISE tokens continue to record increasing trade volumes as they gain recognition for their intrinsic value and utility.

Voise is the future of content distribution and monetization platforms for the music industry, all based on the blockchain. It plans to connect the multibillion-dollar music industry with the modernization and decentralization of cryptocurrencies and blockchain technology.