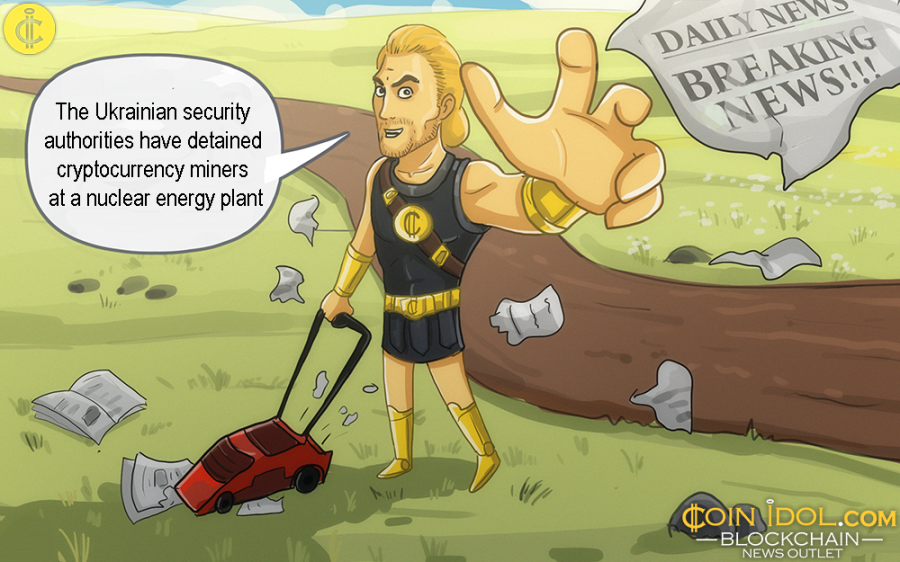 The Ukrainian security authorities have detained cryptocurrency miners at a nuclear energy plant. The Security Service of Ukraine (SBU), the law-enforcement agency and primary government security body in the fields of counterintelligence operation and fighting terrorism, arrested many people for illicitly mining Bitcoin and other digital assets at the country’s nuclear power plant (NPP).

According to the reports from Ukraine, the SBU swiped some insiders carrying out unlawful Bitcoin mining activities at the South-Ukraine NPP. The agency revealed that this operation has uncovered the sensitive security plans of the power plant.

These miners installed a good number of bitcoin (BTC) mining machines at the NPP’s administrative block, with the aim of using the standby power supply and the fastest internet connectivity at the plant.

The SBU revealed that it carried out a thorough search operation at the buildings of the National Guard of Ukraine (NGU), a security unit of nuclear power plant, fortunately enough, it exposed and seized a lot of Bitcoin and cryptocurrency mining apparatuses there, some of the equipment include 6 Radeon RX 470 video cards, Avalon6, Bitmain Antminers, 3 coolers, etc.

The SBU further grabbed different types of cryptocurrency mining equipment at the sites of the military unit of NGU. The SBU successfully detained the suspects and went ahead to begin an inquiry into the case. It wants to know why the officials allowed the illegal miners to connect their equipment at the NPP premises.

This is not the first scenario involving the arrest of government bureaucrats while on duty for illegal mining of Bitcoin and other altcoins using the government’s computers and other equipment. Back in February last year, Russian authorities arrested many nuclear scientists in Sarov at the Federal Nuclear Center, for trying to exploit the agency’s topmost urbane supercomputers to participate in Bitcoin mining.

In July last year, the Chinese police from Guangdong city also detained more than 540 suspects participating in online cryptoasset betting worth over $1.4 billion. Furthermore, around 600 PCs were held by the Tianjin Police because of the same issue – BTC mining.

In addition, in February this year, the German police detained around six Bitcoin miners caught stealing electricity. In May 2019, the Australian Federal Police (AFP) also managed to detain and charge an individual who is a resident of Sydney for mining cryptoasset using the PCs of a federal gov’t agency. With the increasing adoption of cryptocurrencies in the world, bad players will continuously take advantage of each opportunity to accumulate quick wealth and riches with digital assets.

Tags
Bitcoin Power Ukraine Mining Cryptocurrency Government Assets Service
Most Popular
May 02, 2021 at 11:54
News
South Korea Announces Testing of CBDC Right After Imposing a New Tax Framework; Is It a Coincidence?
May 02, 2021 at 10:36
News
Chainlink Breaks Initial Resistance at $38, Eyes $44 Overhead Resistance
May 02, 2021 at 09:14
News
Uniswap in Minor Retracement, Set for More Upside Momentum
May 01, 2021 at 12:54
News
Russia is Going to Establish a Special Department for Exploring Artificial Intelligence
May 01, 2021 at 11:58
News
Dogecoin Price Pushes To The Upside; Can Bulls Breach The $0.45 Resistance Zone?
More