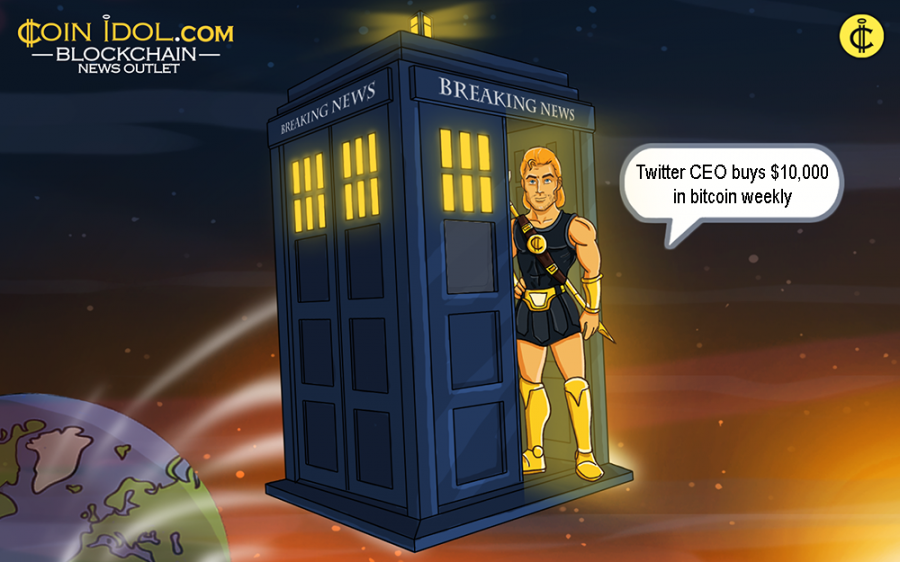 The CEO of Twitter and Square, Jack Dorsey, has noted that he is using thousands of U.S dollars (fiat currency) weekly on Bitcoin (BTC), the leading cryptocurrency by market cap, hoping that the crypto market will turnaround. He revealed that he had hit his weekly BTC purchasing limit of $10,000 using his individual Cash App.

He revealed this during an interview on the cryptocurrency podcast, Tales From the Crypt. The show host called Marty Bent talked to Jack about the Twitter-based #stackingsats BTC-buying promotion (ca. 8 minutes), to which Jack answered:

“I saw that on Twitter, all the screenshots, I thought that was awesome. I would have participated, but I already exceeded my [BTC buying] limit on Cash App. So, I couldn’t buy any more [BTC].”

Marty revealed that “There’s always tomorrow,” to which Jack replied “Tomorrow I probably can, I think we have a limit that rotates every week or so.”

When campaign for buying and selling (trading) cryptocurrencies rolled out on Cash App last year, the weekly limit for BTC buying is actually $10,000.

The Square CEO also revealed that his payments firm is actively creating ways to support the BTC industry and enable it to happen.

"I don't wait around for that to happen to me or to us as a firm, I want to help make it happen," he said.

The deed has been done, freaks.

Thanks again for taking some time to sit down @jack! Had an awesome time.

Telegram & Signal Plan to Make their Own Crypto

It is likely that Jack decided to purchase the max amount of BTC only on that specific week, or some other devious clarification. Since Marty and Jack didn’t explain more, the reader must think about how possible this event is.

What is outside gossip, nevertheless, is Jack’s swiftly increasing standing in the crypto industry.

Dorsey first revealed his empathy for Bitcoin and cryptocurrency in February this year, in an exclusive interview with Joe Rogan while on “Joe Rogan Experience YouTube” program, as reported by Coinidol.

“Imagine being born this year, only knowing that the potential for a global currency [e.g., BTC] exists. That - is exciting [...] You kind of see this with the adoption of any critical technology [e.g.] You see children today going up to any screen and having an expectation that they can slide it, and touch it, and zoom, and use their fingers. And it just speaks to the impact that the iPhone and the iPad had in changing the expectation [...] the same will be true for BTC and blockchain and cryptocurrency.”

He further noted that he believes Bitcoin is the native currency of the internet and that he can’t think of something else more thrilling than having an innate internet currency.

Everything. Mostly I think it has the greatest chance of being the Internet’s native currency. If you think of the internet as you would a country, that’s huge.
— jack (@jack) February 6, 2019

An undercover team of more than 50 Facebook employees are busy developing a mega blockchain project which is likely to go live soon. Other messaging Apps such as Telegram, Signal and others are considering to develop their own cryptocurrencies.