Tokenization of Real Estate: from New Investment Options to the Futuristic Cities of Tomorrow 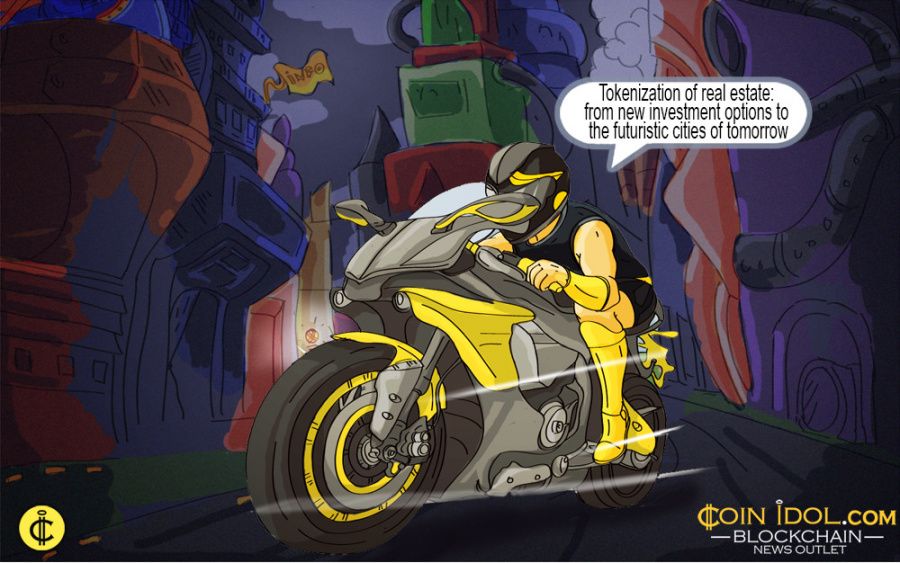 With the emergence of blockchain, lots of industries are looking into the options it can bring about. Starting as an infrastructure solution for a virtual currency, Bitcoin, the technology then evolved into something bigger.

Nearly ten years after Bitcoin was first announced, blockchain-powered solutions have expanded far beyond the financial industry. The immutability and utter security of the technology were appreciated by banks, financial institutions, logistics companies, the videogames industry, and many more.

Media reported that some governments tested the waters of innovations by putting certain property-related issues onto the blockchain. Thus, Ukraine’s government seeks to blockchainize real estate titles as of 2018. Earlier, it was announced that the technology will be employed for the same country’s land cadaster. Japan has announced the implementation of blockchain in its real estate ledgers this summer. All in all, governments seem to embrace the innovations.

When it comes to the private sector, there are numerous companies like Propy, XRED or BitProperty that seek to take it a step farther and actually tokenize real estate. While tokenization itself isn’t a recent discovery, it is only now that it has gained massive traction.

Essentially, tokenization is the process of transforming asset accounting and management in such a way as to make each asset represented by a digital token. This ushers in a wide range of new opportunities as it allows for an increase of asset liquidity, bringing management options to every involved party, not just a handful of managers, and even the chance to implement collective management use cases.

Some experts see tokenization as a new trend that is yet to gain steam, however, they believe that within a few years the entire business landscape can change beyond recognition.

“Markets are changing very fast, cryptocurrencies are a commonplace now, and in a few years’ time asset tokenization platforms could become as casual as smartphones or social networks,” says Valentin Preobrazhenski, LAToken CEO.

Brickblock CEO Jakob Drzazga offers a somewhat more radical point of view in this regard. He says:

“The future of asset distribution isn’t related to different asset classes, but merges digital and real-life assets into one via tokenization.”

When it comes to real estate, tokenization offers a brand new world of opportunities.

Currently, investment in real estate is a burdensome endeavor with high entry thresholds that cut off millions of people from participation. Ranging from house mortgages to the construction industry, it is a conservative realm with strict regulation. Still, the strictness of the regulation is no guarantee against fraud or force majeure.

Generally, those who wish to invest in real estate, be it an apartment in a building that is yet to be erected, or a house that will then be available for rent, will have to purchase some amount of digital tokens associated with said property.

Remarkably, while conservative models offer only a limited number of sharing options and make property transfer a nightmare encased in miles of red tape, tokens represent only a small share of the property in question. It means that instead of investing a fortune, anyone could buy tokens for whatever sum they deem affordable. This effectively lowers the entry threshold for potential investors.

In most cases, the tokens are transferrable, so if someone wants to expand their property or, on the contrary, sell it, they just buy or sell the tokens. This eliminates the risk of being caught in the sticky web of bureaucracy.

For the other side of the business, i.e. construction companies or real estate agencies, tokenization offers a much easier way to raise funds for a new project and increase its liquidity.

In most cases, such models use smart contracts, another marvel brought about by the era of blockchain. Said contracts regulate relations between parties in an automatic, unbiased and secure way, thus effectively eliminating risks of bribery and fraud.

Ryo Nomura, the CEO of BitProperty, one of the projects that build real estate tokenization platforms says:

“Real estate developers are excited by the prospects of connecting with a wider, global investor community and by the open possibilities.”

However, the legal terrain is way behind the technological advancement, so this model lacks any regulatory endorsement in most jurisdictions.

For legal reasons, tokens cannot represent actual shares in a project, though they effectively are ones. Legislation is a very cumbersome thing, so the process of introducing the new investment options to the regulatory framework may take years of lawmaking, lobbying and discussing.

What the Future Holds

Right now, real estate tokenization offers a new set of investment and profit-making opportunities for millions of people. However, it is much more than that as technological advancement brings about a completely new way for people to interact with their property.

With the Internet of Things, that is said to be deployed next decade, tokenized property will be able to recognize token holders as its owners.
Such smart property could keep out everyone who doesn’t have a certain private key associated with the tokens they own. All smart devices installed in such an apartment will respond only to those who are entitled to give them orders.

In the future, when the Internet of Things is deployed, such tokenization would be able to take it another step further by making token holders the only ones capable of using the property they have purchased.

A little ways down the road, in the world where your pillow tells your coffee machine that you awoke, tokenization of real estate assets could become an integral part of business and society in general. So, the growing tokenization trend that we’re witnessing now could be the first step toward the futuristic environment currently only seen in sci-fi movies.

Tags
Token Blockchain Technology Bitcoin Real Estate Companies Management Future
Most Popular
Oct 05, 2022 at 09:57
Price
Ripple Holds Above $0.43 As It Struggles Below Resistance At $0.55
Oct 04, 2022 at 09:16
Price
Litecoin Breaks Through Resistance At $54 And Sets Its Sights On The High At $64
Oct 03, 2022 at 16:13
Price
Ethereum Approaches Oversold Region And Targets The Low At $1,098
Oct 03, 2022 at 15:05
Price
Chainlink Price Declines Significantly As It Faces Rejection
Oct 03, 2022 at 14:51
Price
Weekly Cryptocurrency Analysis: Altcoins Struggle With Downward Corrections As Cryptocurrencies Approach Lower Price Levels
More