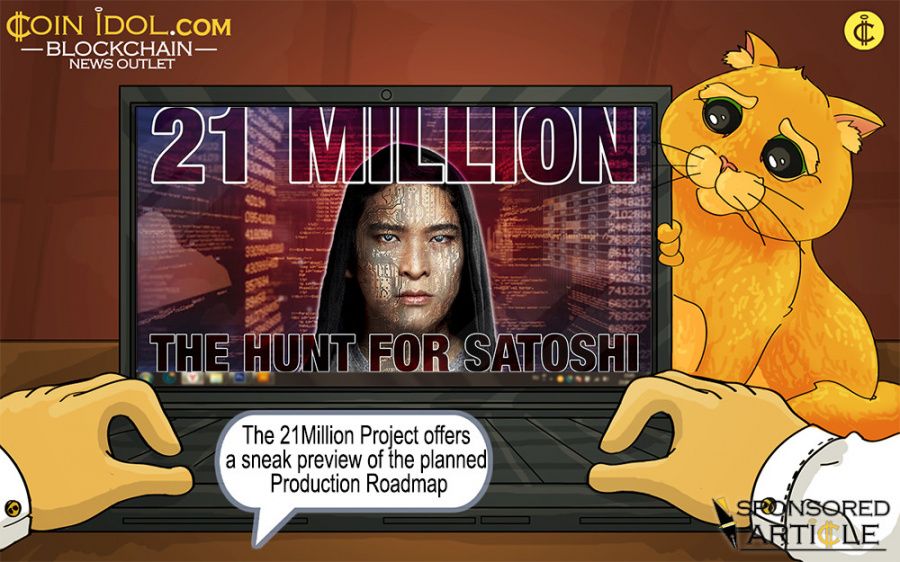 The 21Million Project offers a sneak preview of the planned Production Roadmap with Casting in the UK, Europe and Russia expected to start as early as July. The start-up’s investors – ETH enthusiasts and fans of Action Drama TV, are already helping to pave the way for this high octane show about the Bitcoin Revolution, which is being made using a new, consensus-based model that bypasses the greedy, wasteful and inefficient Hollywood system.

“The making of 21Million will follow a different path. Our focus is on creating what we call ‘Quantum Quality’ making use of the latest technology and techniques - and the Ethereum community is helping us.” explains Creative Director & Co-Founder David Lofts. “We not only have a very flat and democratic structure, we are already starting to work with our fans as contributors, who are providing ideas, location & casting suggestions and helping us to build out and develop the story line.”

“The story follows a disgraced CIA analyst as he travels around the world, trying to evade capture and avoid assassination as he fights to clear his name by assembling random strings of code from the Satoshi algorithm. We’ve had a lot of input from the ETH community already. There have been suggestions that he should uncover the true identity of Satoshi Nakamoto, and even a request to play Satoshi from a Moscow night club owner -  but of course that decision will only be arrived at by consensus.”

The 21Million Project ICO ends on June 28 and having hit minimum funding within six hours the company is already is working on the production schedule and has hinted that casting will start in July with a view to delivering the first trailer for release later in 2017. Another recent Blockchain entertainment start-up, Singular DTV’s Ethervision is the team’s distribution platform of choice.

“21 Million is the first TV & Film Production Company that sits on the Ethereum Blockchain. We are intent on telling the ultimate Libertarian story; a story of cyber-punk, personal freedoms and the struggle for true liberty from the 1% that controls us. The story is very real and is developing in front of our eyes. It will make for an intense ride as the world’s first decentralised TV series.” explains Lofts.

“Our project is getting a lot of attention from the world of film, music and entertainment, especially from people who are also disillusioned with the way the industry operates. We even had a lovely supportive Tweet from Imogen Heap this week!”

Supported by ICO Platform TokenMarket.net, 21 Million has some serious weight and momentum behind it, generated by community interest in the 21 Million model in which Token holders receive a range of benefits from the Token including access to a significant rewards package in which 100% of the proceeds from syndication and licensing are returned to coin holders. There is also no barrier to entry -  fans can get involved for as little as $1.00 – payable in Finney naturally!