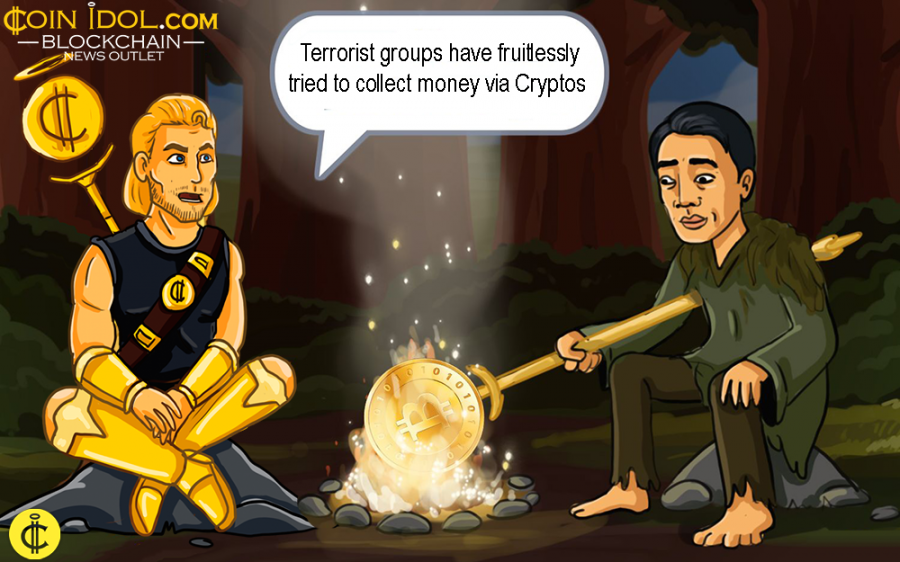 Terrorist groups including Islamic State, Al-Qaeda and many others have fruitlessly tried to collect money via Cryptos such as Bitcoin and Ethereum, an ex CIA analyst told Congress on September 7, as per Forbes.

“By preparing now for terrorists’ increasing usage of cryptocurrencies, the U.S. can limit the ability to turn digital currency markets into a sanctuary for illicit finance,” said Yaya Fanusie in prepared testimony to the House Financial Services Committee.

According to Yaya, Cryptos have, by far, been the worst sort of money since they buy weapons and other goods with hard cash in regions with flaky technology infrastructures such as Iraq, Syria and Africa. For jihadists, hard cash is also a more faceless source of funding.

On Friday, September 7, a handful of days before September 11 memorial services on Capitol Hill, many experts revealed how the majority of terrorist groups are getting and protecting funding for their activities. The congressional committee came up with 3 important conclusions, according to its website.

First, “The threat of terrorism is continually evolving with an increasing number of groups around the world threatening the United States” and “efforts to combat the financing of terrorism are a central pillar to combating all forms of terrorist activity.” Finally, the “threat from terrorism and terrorist financing requires constant vigilance and adaptation by law enforcement, financial institutions, and regulators.”

The House Financial Services Committee supervises the financial services sector, including the insurance, housing, securities and banking industries. It's being chaired by Rep. Jeb Hensarling (R-TX) and industrious members include Rep. Peter King (R-N.Y.), Maxine Waters (D-CA) and Keith Ellison (D-MN). Yaya is the director of analysis for the Foundation for Defense of Democracies Center on Sanctions and Illicit Finance.

Meanwhilst, Iran is exploiting Blockchain technology and Cryptos to try and bypass U.S. sanctions. And in this summer, the Islamic regime noted it would create a national crypto and Blockchain-based facility. This was the reply of Tehran to the Trump administration proclaiming earlier in 2018 that it would again be imposing sanctions and withdrawing from the Iran nuclear deal.

Cryptocurrency, especially Bitcoin, is seeing massive adoption in the Middle Eastern nation of an estimated 80 million people with an inflation rate of 8.3% and an unemployment rate of 11.9%, as per TradingEconomics.com. These sanctions are possessing a devastatingly disheartening effect on Iran's economy, exerting a lot of pressure on Tehran's assailing regime.

Tags
Cryptocurrency Terrorist Bitcoin Money Ethereum Forbes Finance Sanctions Service
Most Popular
May 11, 2021 at 14:27
PR
VulcanVerse’s Marketplace Volume Triples from $5m to $15m, $20M Giveaway to Follow
May 11, 2021 at 14:02
News
Bitcoin and Dogecoin Prices Trending Up Following Hype from Mark Zuckerberg and Elon Musk
May 11, 2021 at 13:00
News
Ripple Consolidates Above $1.35 Support as Sellers Push to the Downside
May 11, 2021 at 12:11
News
Banks Are Getting Increasingly Tough on Bitcoin and Other Cryptocurrencies Amidst Mainstream Adoption
May 11, 2021 at 11:08
News
Litecoin in Minor Retracement, Eyes Next Target at $604 High
More