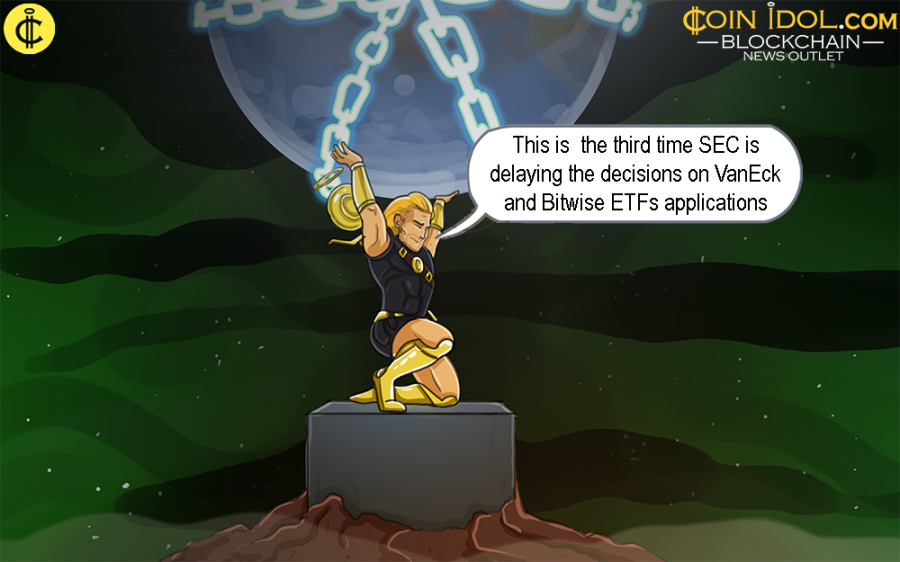 The U.S. Securities and Exchange Commission (SEC), the agency responsible for regulating electronic securities markets in America, has once again postponed its verdict on 3 Bitcoin exchange-traded funds (ETFs) applications. ETFs are considered by many in the digital asset industry as a breakthrough for mass adoption of BTC and other virtual currencies.

This is like the third time SEC is delaying the decisions on VanEck and Bitwise ETFs applications. The first time was in March and the second time was in May. That was the time when the SEC set around 14 questions for the cryptocurrency community and entire public to answer, and allow the agency to collect more data, sentiments and views about the VanEck’s proposal, as we reported.

Basing on the official documents released this week on Monday Aug 13, it appears that the self-regulating agency of the U.S. federal government will postpone an official verdict on the proposed rules and regulations changes for three cryptocurrency ETFs by the NYSE Arca (ArcaEx) and CBOE BZX Exchange belonging to various valuable asset managers including Wilshire Phoenix, VanEck SolidX plus Bitwise Asset Mgt.

SEC Needs More Time to Come Up with Proper Judgement

The SEC’s announcements show that the decision for approving and listing VanEck has been scheduled for Friday October 18 this year, that of NYSE Arca to be listed on Bitwise has been pushed back to Sunday October 13, 2019 and finally, that of Wilshire Phoenix has been postponed to Sunday 29th next month. Remember, the VAnEck application was submitted back in Jan this year followed by the Bitwise’s application which was filed in Feb the same year, and the application by Wilshire Phoenix was filed earlier last month.

The SEC made it clear in every suit that it has found it suitable to set an extended time within which will be easy for it to make a proper order either allowing or rejecting the suggested rule and regulation amendment and also get adequate time to ascertain and appreciate this proposed rule amendment.

Since the U.S. SEC is an autonomous agency, it has the full authority based on the Securities laws to delay its decision on proposed monetary goods and services so as to collect enough data or more deliberate on a rule amendment which would enable the listing.