The Rise of Stablecoins: Are They the Crypto Market's Future? 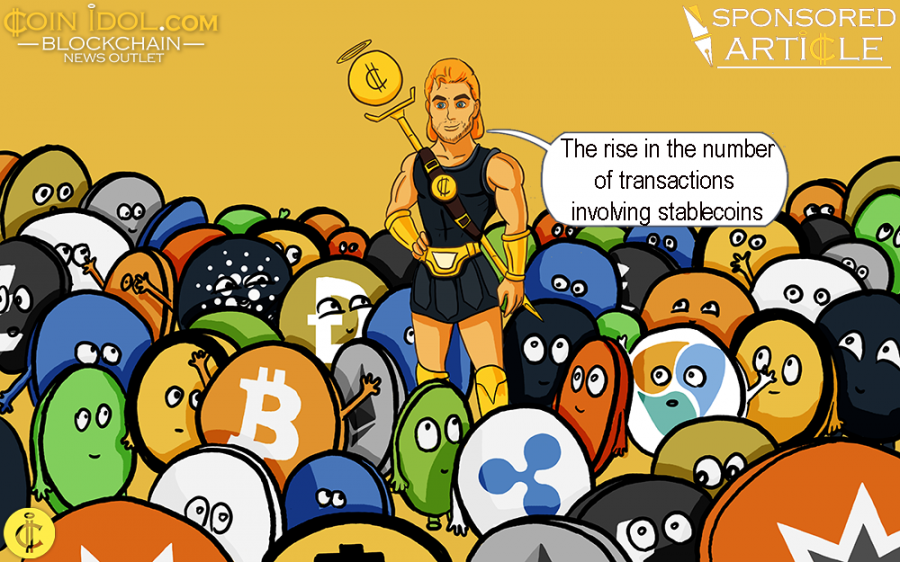 While the rest of the crypto market has been stagnant for quite some time, market analysts are noticing the growing spread, and the rise in the number of transactions involving stablecoins in blockchain. Experts at ICOBox evaluated the pros and cons of these "stable coins" and came up with their conclusion regarding their chances to replace bitcoin.

According to the data available for the research, in just three short months four major stablecoins – USD Coin (USDC), True USD (TUSD), Paxos (PAX) and Gemini Dollar (GUSD) – shot past the $5 billion mark in terms of the volume of blockchain transactions, and between September and November the number of transactions went up by 1,032%. These are colossal figures, especially considering the overall downward trend in the market.

The secret to stablecoins's growing popularity lies in their primary quality built right into their name – these coins are stable. They are tied to the value of a specific tangible asset (such as traditional currencies, gold, or oil) in the expectation that in turn they will maintain their value over time. This is a useful tool for traders wishing to protect their profits from the volatility of other crypto currencies without having to convert them into fiat. However, the very concept of "stability" here is somewhat relative, because the rate is tied to the value of some other asset. Which brings up a number of important issues.

The first type is the simplest and easiest to understand. A digital coin is linked to a fiat currency at the rate of 1:1, with reserve fiat funds kept in the bank, and the cryptocurrency holders can exchange their crypto for cash at any time. But what about decentralization? Where is transparency? Forget it! In this model, users have to completely trust the central authority holding the fiat reserves. When dealing with this type of stablecoin, one can sit out the next cryptocurrency rally, but this is really one of its few advantages. Moreover, there is no guarantee that the underlying fiat currency will not drop in value, and when you divest of your stablecoins you will be left with less than when you first got in – and these are just objective market realities.

“Even despite this consideration, crypto experts see the great potential of stablecoins tied to euro," says Dima Zaitsev, Head of International PR and Business Analytics at ICOBox. "Let's look at Ethereum-based stablecoin EURS released last summer, which is tied to euro. What attracts those investing into the new coin is the transparency of underlying assets and the multilevel process of their verification through, for example, daily and weekly statements and quarterly audits. This is a great approach which allows to track the real assets securing the crypto coin and avoid speculations. It is vital for investors to see that they are not being deceived – this instantly increases trust in the project."

British startup London Block Exchange (LBX) is also contemplating the issue of stablecoins tied to euro. In the meantime, they announced their plans to launch a stable coin backed by the British pound.

Stablecoins secured by cryptocurrencies have their own set of issues, and they are fairly easy to spot. Digital money in today's market conditions are extremely unstable, which means that even if you get into stable coins you will not be free from volatility. There's only one possible solution to this quandary – to provide extra collateral for the stablecoin, which will serve to minimize the effects of the underlying currency's rate fluctuation. But this makes them too capital intensive. And even extra collateral will not save such a cryptocurrency from the next massive bitcoin or Ethereum crash – your stablecoins will simply evaporate.

The third model is a security-free stablecoin. In effect, these are algorithm-based assets, whose stability is ensured by balancing the rate in various ways. They operate similarly to the seigniorage principle, where the government profits from increasing the amount of money in circulation: the issuing authority, the country's Central Bank, creates new assets in step with the rise in the demand and buys them out as their value drops, effectively creating a controlled currency issue.

Many market experts believe that this unbacked stablecoin model is the most attractive and ambitious, because these coins are completely decentralized and independent from other currencies, which makes them impervious to crises. However, their disadvantage is that their lack of underlying assets makes their holders completely unprotected in the event of the stablecoin's collapse. They are also nearly impossible to assess for safety, security, and prospects and are extremely difficult to launch.

“Stablecoins is a potentially very valuable market solution, but at this point it is far from flawless. The crypto market has taught us to refrain from jumping to conclusions and diving in. I believe that for now it would be best to keep close watch over the development and application of stablecoins. That would be the right thing to do. At this point it seems quite premature to speculate whether the model will ever push out and replace bitcoin," weighs in Daria Generalova, Managing Partner at ICOBox.

Tags
Future Market Stablecoin Bitcoin Transaction Cryptocurrency Blockchain Fiat Assets
Most Popular
May 12, 2021 at 15:03
News
Cardano Consolidates Below Recent High as Bulls Attempt to Breach $1.80 Resistance
May 12, 2021 at 14:03
News
Most African Countries Cannot Access Akoin. How True is the One Africa, One Koin Sentiment?
May 12, 2021 at 14:00
PR
Spring and Bondly NFT Partnership Unlocks Digital Potential for Creator Economy
May 12, 2021 at 12:59
News
Bitcoin Cash in Sideways Move, Battles Resistance at $1,600
May 12, 2021 at 11:26
PR
XRP is Back on Track on Phemex
More