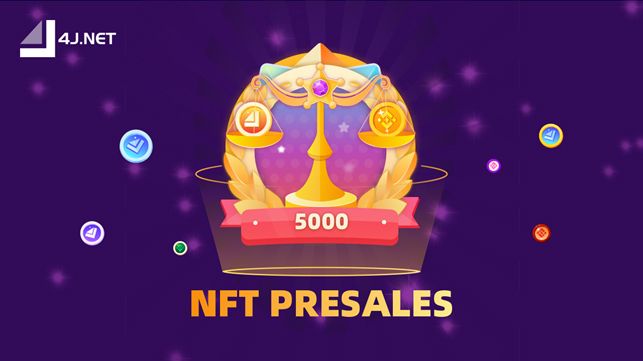 Blockchain technology creates a reliable cooperation mechanism and affords trust due to its widespread prospects. The advancement of this technology is further bringing about a massive monetary revolution of financial inclusion.

Yet, it’s now too late for investors to hold Shib, Safemoon, and other tokens as they have appreciated a lot. Don’t worry! Here’s a new chance! 4JNET, a new encrypted token, will debut on 1 December 2021. Moreover, the limited-edition NFTs will be presold on 18 October 2021. Lots of experts and longtime players in the token industry are showing strong support for it. Seize the chance to make your fortune!

The prevailing COVID-19 epidemic in 2020 devastated all industries across the globe, and economic flameout has discouraged investors a lot. Then, why has 4JNET made such a splash among experts and senior players in the token industry? This can be partially attributed to the underlying logic and protection mechanism of encrypted tokens.

First, let’s get a glimpse of the HODL idea of the encrypted token. 4JNET echoes this idea to a great extent, which advocates “buy and hold” regardless of its appreciation or depreciation in the short run. In essence, its fairness, and 4JNET’s security and transparency enhance investor confidence in its long-term value, allowing them to become rich one day.

Here’s a widely circulated story about the HODL idea. The player GameKyuubi created the word HODL accidentally after getting drunk and complaining about repeated failure in Bitcoin investment. In 2013, GameKyuubi posted an article called “I AM HODLING” on the Bitcointalk forum, a holy land for encrypted token holders, and grumbled that “his tokens often depreciated after buy-in and appreciated upon sell-out, so he was always tortured by the market and teased by others”. Therefore, he decided that “he would hodl XXX regardless of its fluctuations, and would not sell it hastily”. The article became very popular soon as he had voiced the feelings of numerous investors who went crazy with tokens. Since then, the mistakenly spelled “hodl” gradually evolved into the HODL idea. That is, you will become rich one day as long as you hold the tokens prudently for a long time!

Facts have shown that those investors who had invested in Bitcoin, Ethereum, Ripple, and DASH would have earned gains of hundreds or even thousands of times if they were to hold these tokens for years. Later, someone supplemented the idea by stating that “HODL” equal to “hold on for dear life”! We hold the tokens for a better life!

Throughout the development of the token industry, previous tokens often slumped soon after a boom because early investors often chose to sell their tokens after getting high returns to reduce risk and achieve maximum benefit. In order to better solve the problem, 4JNET will introduce a mechanism of decreasing service charges to maintain stable prices. To be specific, 90% of the initial transaction amount will be withheld as the service charge, and 6% of that will be distributed to all token holders in the form of tokens. The remaining portion will be automatically transferred into the liquidity pool.

As transactions increase, the service charge will gradually be decreased by up to 10%, thus bridging the gap between early and late investors. 4JNET’s early investors need to pay high service charges even if they buy at an earlier time, which are then automatically put into the liquidity pool to promote a steady price increase and alleviate price instability resulting from the pressure to sell.

Considering the prospects of the current encrypted token market, once the holders sell their tokens in large amounts, the prices will plunge. Yet, 4JNET’s unique mechanism, to put it simply, “hold and earn”, demonstrates its unique strengths. At that time, the fluctuations in monetary prices, if any, will not be extensive, so it is worthwhile for the investors to hold their tokens.

In addition, an official news source spread the information that 4JNET will kick off on 1 December 2021 UTC time at the latest. No one can trade it beforehand, ensuring fairness for early investors and giving the same chance to all players.

At present, 4JNET has been awarded a U.S. MSB license, a must for prestigious digital currency trading institutions, which grants monetary exchange and sending services. This means that 4JNET has been approved by authoritative institutions, and is more inclined to be recognized by global investors as a potential first-class platform, delivering them more diversified services. In the meantime, 4JNET’s smart contract is being audited by CertiK, and all business logic is realized through smart contracts and fully open-sourced.

As is known to all, CertiK is a world-leading blockchain network security company. By utilizing advanced formal verification techniques, mathematical methods are utilized to prove that the smart contract and blockchain ecosystem are free of vulnerabilities and can resist invasion by hackers. CertiK has audited not only renowned encrypted token exchanges like Binance, Huobi, and OKEx, but also blockchain programs like Ethereum, Terra, and Neo.

Moreover, as liquidity mining becomes an increasingly heated topic in the encrypted token industry, more and more programs are launching their own liquidity mining. And since a siphon effect like that of a miniature black hole has been preliminarily initiated, and stablecoin training has become increasingly popular, it is producing a very significant spillover effect. In summation, liquidity mining mainly earns gains by providing token assets. Besides, 4JNET’s liquidity certificate and contract rights will be blocked into its own black hole, and the true liquidity of its core engine ensures the benefits of long-term holders, which is an astonishing innovation in the token industry!

The to-be-presold NFTs account for 30% of all tokens issued, and all NFT holders can claim 30% of all tokens after 1 December, unlocking 2% of them every day. In other words, the more they hold, the more tokens they will claim. More importantly, 3% of the service charge can be exempted by holding NFTs.

Previously, a 4JNET project leader expressed in an interview that 4JNET had been awarded the U.S. MSB license, introduced the pioneering decreasing service charge, and that its business logic is being realized through smart contracts and is fully open-sourced. To stabilize prices, the project team does not hold 4JNET tokens, so a presale is being held to raise money for publicity on global media like Facebook, Twitter, YouTube, and KOLs in the token industry. Authoritative professionals hold an optimistic attitude for the presale of limited edition 4JNET NFTs.

Currently, the entirety of encrypted currency is still developing vigorously and has unlimited potential and value. It can be summarized from previous analysis that the 4JNET project is quite transparent and fair in terms of its innovative design idea and randomly generated NFT. In addition, its unique mechanism and huge investment potential, as well as the accreditation by authoritative institutions, all strengthen the investor belief that 4JNET will bring generous benefits and wealth to holders.