PlayerAuctions and You:Getting the Best Deals on CD Keys

Video games are expensive; at least more costly than they were before, which makes saving money hard as a gamer. Here are some tips to save money on games, legally.

Six Tips to Earn CD Keys at a Bargain

1.                  Steam Sales: offers a vast library of games from all kinds of publishers and makers, though limited to PC. Steam holds a big sale regularly every summer and during the holiday season, and sometimes irregularly on some occasions. The portal has smaller sales throughout the year. The price cuts range from 10% to as high as 75% or even 90% off. Some games are available to buy for 10% of their original price! The summer sale for this year began on June 22 and runs until July 5th. Check it out today!

2.                  Origin’s On the House Promo: Origin, Electronic Art’s (EA’s) version of Steam, Uplay, and Battle.net, offers paid games for free once in a while. A past “On the House” promo lets players download the Sims 2 collection for free! Yes, that’s eight expansions and ten stuff packs plus the base game, all for the price of nothing. Even though the time for Sims 2 has passed, other games will have their turn. Also, some classic games are available for players to download for free on the site.

3.                  Humble Bundle: provides a pack of games for a modest price. In general, buying games in a bundle is cheaper than purchasing the games separately (sometimes even if the games are on sale). Games in each package are chosen for their similarity so buyers could get their money’s worth. Besides, a portion of Humble Bundle’s profits goes to charity. Gamers get their games while helping people in need.

4.                  Second-hand Games: easier to do on consoles rather than PC because of the anti-piracy policies and methods. Second-hand is an inexpensive way to get games. Although risky, with the dishonest people, and frauds, it’s a great way to get games cheaper than retail value. PC games are harder to sell because of their unique CD Keys that are usable once. Fortunately, some gamers who sell new keys. Search around the Internet because sites and people selling second-hand games will appear in the results. Otherwise, there are retail stores that offer this kind of service.

5.                  Borrow from Friends: an alternative that doesn’t involve money and the borrower has to return the game when he or she finishes. It’s a safer way to get games, though limited to which games the lender has. Of course, the borrower must have the same console as the lender.

6.                  Steam’s Family Sharing: an option for borrowing from PC gamers since they can share their libraries with family and friends. The method involves the owner logging in their Steam account on the borrower’s computer and allowing the Family Sharing option. The borrower can use the owner’s games on their computer, as long the owner (or other borrowers) isn’t using the library for that game. Only use this choice with individual who you trust, and always protect your account details. Lastly, this selection only grants five unique accounts and ten individual computers to access one library. Choose wisely! 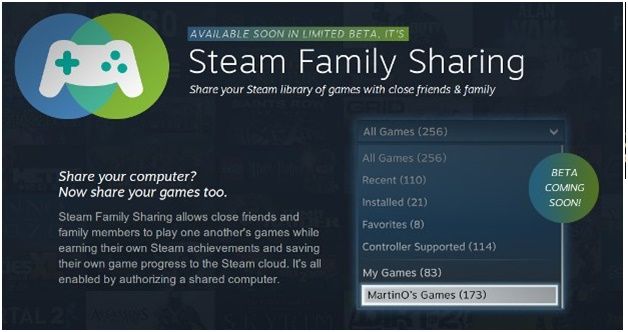 Gamers can get their hands on video games for good deals or free. There’s no best way to save up on games (cough*pirate it*cough), which could be a preferred method, depending on who you ask. It can be hard to stop people from pirating games. However, to support the publishers and game developers, pay for the original copies of games, and feel better about yourself.

Summary: Six ways to get and play games for a lower price compared to retail value. Some games are free. Players can save more money on games even as prices rise.

PlayerAuctions is the most secure player to player network to buy, sell, and trade MMO game assets, including FIFA Coins, CSGO Trade, and LoL Items. The site is a neutral marketplace that supports trading for popular MMOs, such as RuneScape, Old School RuneScape, World of Warcraft, Diablo III, EverQuest, Eve Online, League of Legends, and over 200 other games. If you are interested in more information, please contact our media team at marketing@playerauctions.com