Physical Bitcoin Debit Cards Are Coming Back to Europe 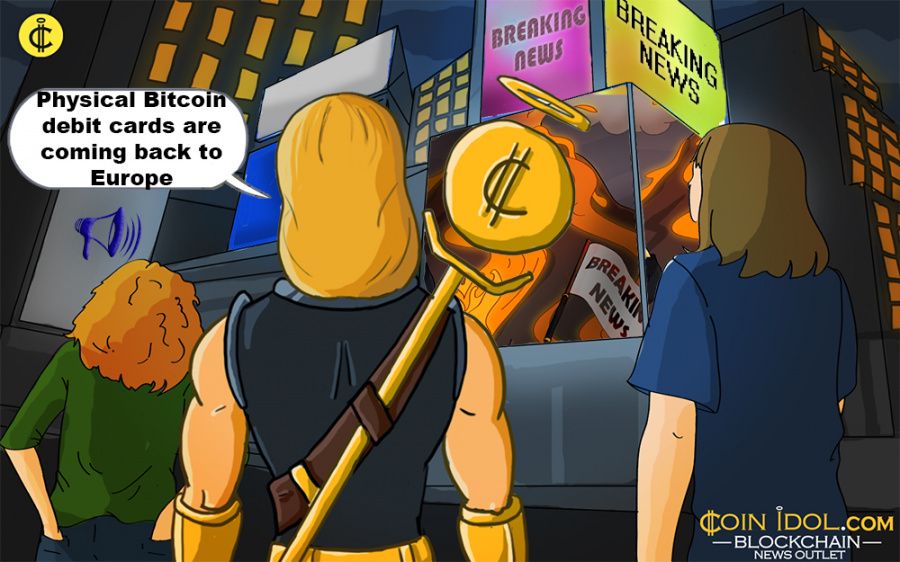 Since VISA’s decision to suspend all Bitcoin prepaid debit and virtual cards issued by Wave Crest Holding in the EU, citizens of Europe and many other countries have had no option to use cryptocurrency cards for withdrawals and POS payments. However, two cryptocurrency-related companies are preparing to bring their new physical and virtual cards to the market.

The decision to block all Bitcoin VISA cards was taken back on January 5, 2018, when VISA announced it was closing all of its Visa prepaid cards due to a change in operating permissions. As a result, most of the cards were immediately blocked in the EU and providers of cryptocurrency debit cards services in Europe, like BitPay, Cryptopay.me, Coinsbank, TenX, Wirex, AdvCash and others, could no longer offer their customers cryptocurrency withdrawals or POS payments using debit cards.

Now, everyone is expecting new opportunities and solutions on the European cryptocurrency payments market. Coinidol.com turned to several Bitcoin virtual and physical cards providers to find out whether we should expect a solution to this problem anytime soon.

The Winter Is Coming to an End

According to Dmitry Lazarichev, the founder and CEO of Wirex, in April the company will begin working with physical contactless cards supporting payments in GBP, EUR and USD.

This solution will be provided by Contis, a proprietary platform, licensed across all 31 EEA countries and a member of Visa.  The partnership follows hot on the heels of the launch of Contis’ Buffer Account, and further demonstrates the business’ power to drive structural change within the payments ecosystem through the innovative use of its legacy-free banking and payments platform and its ability to process real-time transactions on both UK and SEPA payment ‘rails’, stated Contis in its announcement of partnership with Wirex on March 14.

Virtual cards will go live on March 20th with physical cards set to be launched by mid-May and will be available for EEA countries only. However, China, Russia, South Korea and a number of other countries under sanctions will remain without this option for now.

“No sanctioned countries allowed but in the meantime, the cards can be ordered by EEA residents only, in 1-2 months we add some Asian countries etc.”

Another solution will be launched on the market from CryptoPay, stated its co-founder George Basiladze. CryptoPay will work with another operator and promises an exclusive solution for Russia.

Tags
Bitcoin Europe Debit Card Payment Cryptocurrency Market PoS Option EU Companies
Most Popular
Sep 23, 2021 at 13:10
News
El Salvadorans Embrace Bitcoin Despite Problems with the National Wallet
Sep 23, 2021 at 12:16
News
The Central Bank of Ukraine to Pay Salaries in Digital Hryvnia by the End of 2021
Sep 23, 2021 at 10:48
News
Binance Coin is in a Brief Uptrend, Faces Strong Rejection at the $385 Resistance
Sep 23, 2021 at 09:48
News
Bitcoin Struggles to Sustain Above $44,000 as It Reaches Overbought Region
Sep 22, 2021 at 12:12
News
Banks in EMEA Miss Out the Potential of Blockchain, with Only 19% Benefiting from the Technology
More