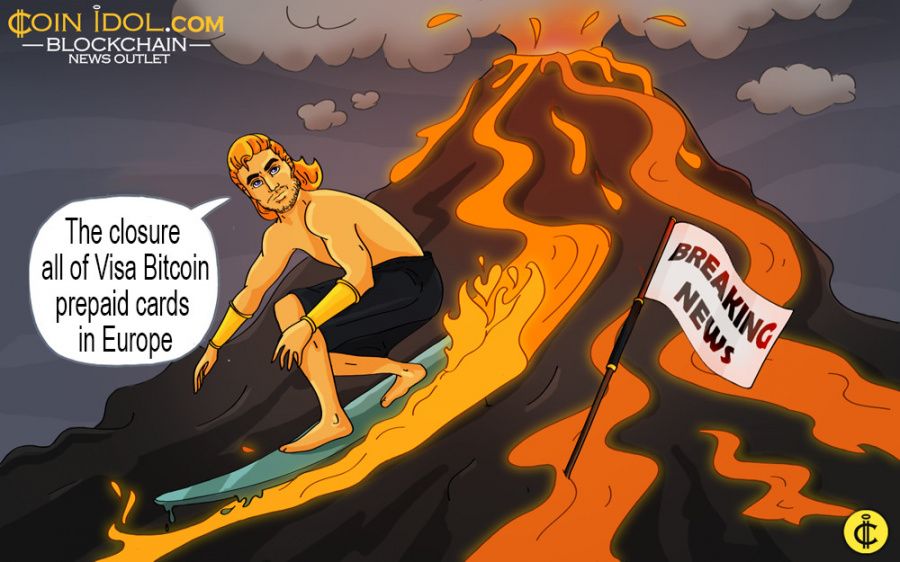 On January 5, 2018, Wave Crest Holding a company issuer of Bitcoin debit and virtual cards announced it was closing all of its Visa prepaid cards due to a change in operating permissions. As a result, all the cryptocurrency cards issued for customers in Europe became unavailable for POS payments and withdrawals.

According to reports, Visa, a multinational financial services corporation and payment network, has instructed the issuing bank to immediately close all accounts of its prepaid Visa debit card programs. Most of the cards were immediately blocked, and only cards used for salary payment will be still valid until 19 January. The license agreement with Wave Crest Holding is terminated due to the continuous non-compliance with the Visa rules, stated representatives of Visa.

“The BitPay Card (non-US) is one of these programs, along with other cryptocurrency-related and standard prepaid Visa® debit cards. Unfortunately, Wave Crest was unable to provide us or cardholders with more time to prepare for this change. Your BitPay Card account is now deactivated, and you will not be able to use it for further payments or withdrawals. ”

Now, BitPay is offering card order fee refunds for all users who ordered on or after 1 December 2017. The company was already in discussions with potential alternative issuers for the BitPay Card which will allow them to serve customers in Europe and beyond.

Coinsbank, a cryptocurrency exchange, wallet and prepaid debit card provider, has sent the following letter to all its customers:

“All Named, Named White and Virtual cards have been closed and will no longer work.

In a few days we will refund all the expenses related to issuance of active plastic cards. All new card orders also have been cancelled and fees have been returned to Customer’s accounts. Our platform works in regular mode, all funds deposited to CoinsBank accounts remains safe and untouched and are available by using other payment methods.”

The message from Coinsbank also states that it is going to provide a funds withdrawal by Western Union of up to 1000 USD/EUR for free.

The TenX president and co-founder, Julian Hosp, said in his press conference via YouTube livestream, that the decision from Visa was not a general strike against cryptocurrencies but an action against the debit cards issuing bank – Wave Crest.

George Basiladze, CEO of Cryptopay.me Bitcoin wallet provider, said to Coinidol.com, that now everyone is in a common position and are looking for a new partner bank.

He also noted that the TenX's statement that they received a bank license to issue cards without intermediaries is more like manipulating the market, as the obtaining of such a license is a complicated process and takes up to 2 years. He added:

“As far as I know none of the providers fully serve EU citizens. Every other provider will be searching for other issuer to support the operations. Back up plan will be up and running soon.”