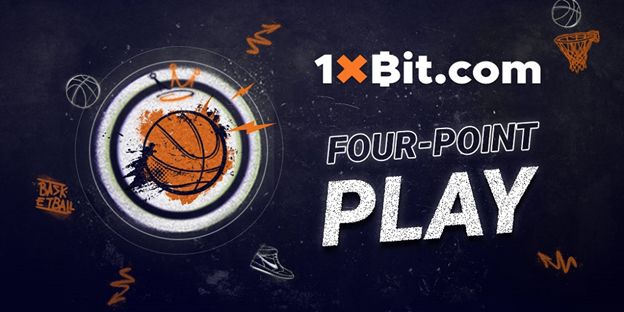 Are you ready to slam and dribble your way through 1xBit’s Four-point Play? We’re waiting for you!

12th November 2021, Limassol, Cyprus — At 1xBit, we are incredibly pleased with the news of the NBA 2021 – 2022 schedule returning to normal. For too long have we endured postponed matches and an increased number of restrictions, but there appears some light at the end of the tunnel. With the off-season at its end and training camps set to begin soon, there is an air of almost electrifying excitement everywhere as basketball fans rejoice to experience a relatively normal season of basketball.

The opening night is scheduled for the third Tuesday of October. In honor of this incredibly thrilling news, the team at 1xBit invites you to participate in a celebratory tournament called the Four-point Play. At 1xBit, we are all about welcoming fans for all sports!

How to participate in Four-point Play

The Four-point Play begins on November 1 and ends on December 1. The final prize draw will take place on December, 2, so make the most of it! Much like good shots bring points to basketball players, long winning streaks bring victory to bettors at 1xBit! That’s right, the luckiest users whose bets on the NBA win in a row the most times will get the most points and eventually find themselves on the path to victory!

In order to participate in Four-point Play, users must place a bet of at least 0.5 mBTC on either live or pre-match NBA events with odds of 1.5 or higher and count their victories. The longer winning streaks a user has, the higher will be their place in the leaderboard. A high leaderboard position will eventually translate into more prizes to claim:

At 1xBit, we strive to build a fun and entertaining environment for fans of all sports! Apart from being an incredibly inclusive sports betting platform, we offer the following perks:

The Four-point Play is only one tournament. There are many more coming your way. Follow the social media channels to be the first to know.

1xBit is the source of this content. This press release is for informational purposes only and should not be viewed as an endorsement by CoinIdol. We take no responsibility and give no guarantees, warranties or representations, implied or otherwise, for the content or accuracy. Readers should do their own research before investing funds in any company.