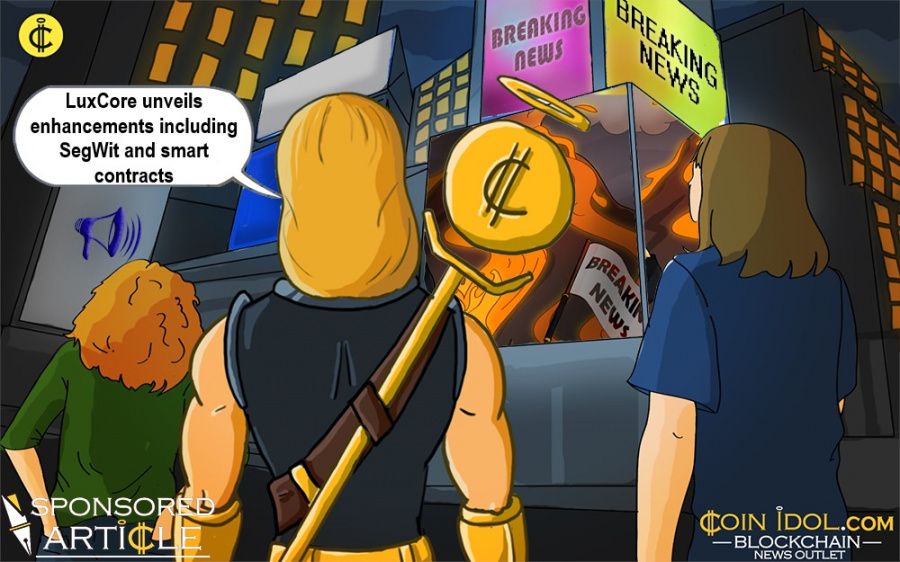 Australian-based blockchain ecosystem built for enterprises LuxCore has announced a slew of significant updates for its unique platform, providing even more sophistication for what is already the world’s most efficient GPU blockchain, which hosts the open-source public digital asset LuxCoin.

With the latest updates, LuxCoin becomes the latest cryptocurrency to benefit from the efficiency of Segregated Witness (SegWit). It has also enabled the use of smart contracts, allowing users to perform interactions based on ruled set out by pre-defined contracts. Along with the closed-source products LuxGate and Parallel Masternodes, LuxCoin will emerge as one of the most secure and private channels for digital payments.

The impact of these announcements has not been lost on the market, with LuxCoin gaining significant ground in the days following the upgrades, further strengthening its position in the global cryptocurrency market.

LUX’s objectives are focused on the needs of individuals, enterprises and governments, prioritizing the increasing demand for transaction solutions that combine speed with efficiency, without sacrificing security. LuxCore’s devotion to ASIC resistance comes in the shape of a new GPU PHI1612 algorithm, developed from the foundations of JK, Skein, Cubehash, Echo, Fugue, and Streebog. It provides unrivalled efficiency for GPU mining, using only 90% of typical power consumption while producing quicker hash rates.

While most major cryptocurrencies operate on a recognized Proof-of-Work (PoW) protocol to secure their networks, PoW is beginning to be seen as incredibly time intensive and power hungry. By combining both PoW and Proof-of-Stake (PoS), augmented by Masternode technology, LuxCore mitigates the massive waste of electricity and time in mining and validating transactions. At the same time, this makes LuxCore more readily able to scale, while offering customers options in choosing their own variables for private and secure payments.

The technological upgrade known as SegWit was a major scaling exercise for many major cryptocurrencies last year. Simply put, when signature data on transactions are removed (segregated), transactions take us less space and more of them can be fit onto a single block, effectively increasing the block size limit by making data more efficient. Although few have yet to fully implement the changes, LuxCore plans to fully introduce SegWit around February 20th, 2018.

Because data is segregated from the transaction, it prevents recipients from intercepting and changing the transaction ID of the sender to potentially receive more coins than specified. SegWit, therefore, results in a higher level of security by removing this point of vulnerability. It is also seen as a significant move towards scaling the Lux blockchain.

Decentralization and direct peer-to-peer transactions gain a new channel through the introduction of smart contracts. Users can deploy them directly from their wallet, enabling cross-network interactions defined by conditions. Users can now interact with each other transparently without the risk of conflict by executing, authenticating or enforcing the contract.

Nodes are simply computers that are mining or staking cryptocurrency but LuxCoin holders can also now decide to put up a collateral of coins in exchange for operating a perpetual, dedicated Masternode. Masternode operators can also generate extra revenue for helping secure and stabilize the network by verifying transactions.

At least 16,120 LuxCoins will be needed to operate a Masternode. Rewards will be given out randomly to all Masternode operators as Proof-of-Service, derived from 40% of PoS returns. Currently, each block found generates 0.4 LuxCoin for rewards. This reward structure is due a revamp to ensure masternode owners gain better incentives.

LuxCore’s blockchain has been built to have the capacity for Parallel Masternode on a Private Parallel Masternodes will soon be enabled, specifically to address businesses’ and institutions’ requirements of security and reliability. This private network will operate alongside the public one, unifying the networks in a concept called LuxGate. Through a coin-mixing technology called LuxSend, users can add anonymity to their transaction.

In only a few days since the announcements, LuxCoin has seen a sharp growth in price from $8 a week ago to its current levels around $30, reflecting its wider adoption and use. With these recent upgrades and publicity, LuxCoin also gains a more credible reputation, while its valuation marks its potential as an emerging cryptocurrency based on a stable and accepted enterprise platform.

To learn more about LuxCore, visit its website or read its whitepaper. Check out their updates on Twitter or chat with them on Telegram.