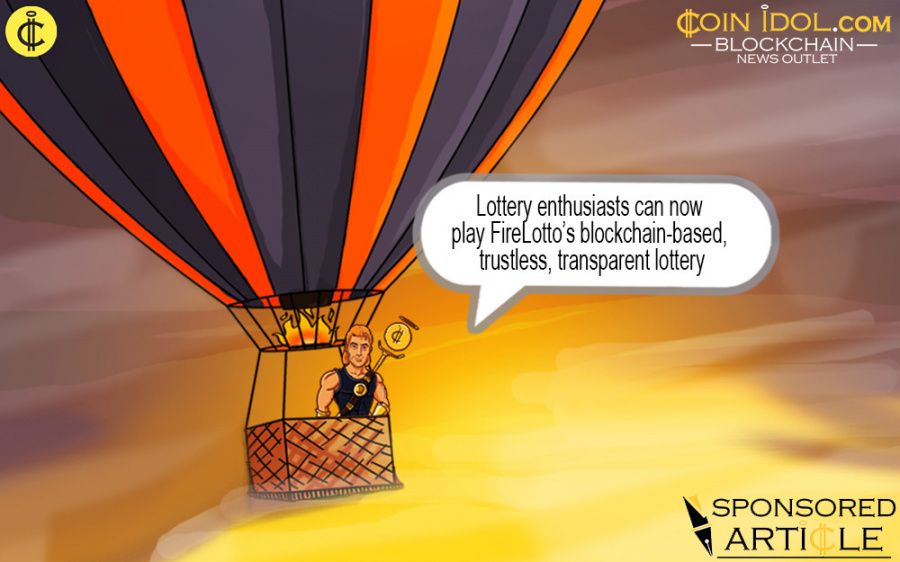 The much anticipated world’s first transparent lottery has finally arrived on the scene, with FireLotto launching at the turn of 2018 to introduce the new way of playing lottery based on the Ethereum blockchain protocol.

With all the innovative features that blockchain offers, FireLotto is the only lottery that offers full transparency, secured by the very latest smart contract technology powered by Ethereum, and without a single server problem.

Though lotteries have been a mainstay of gaming offerings across the globe, most players will only be all too familiar with the lack of transparency surrounding lotteries, particularly around the draw results and ticket disbursements. Current lottery players have no real way to verify the information that they access, relying on the reputation and trust on major lottery companies for fair resolution and payouts.

To play FireLotto is easy, since it works just like any normal lottery. Tickets can be bought directly with Ether (ETH) via smart contracts at the FireLotto homepage, and players simply confirm a sequence of numbers or let a random pick choose the numbers for them. Every ticket ever bought will be executed via smart contracts, ensuring they are recorded on a tamper-proof blockchain.

Ticket sales will be halted an hour before every draw (currently every 24 hours, with a timer countdown shown on the lottery page), and all purchases are added to the prize pool. Winning numbers are then drawn with a blockchain-based Random Number Generator (RNG), with its full algorithm fully published for viewing. Furthermore, the smart contract providing the RNG is fully open access, viewable for inspection by anyone at any time on GitHub – everything that happens behind the scenes is fully transparent.

Tickets that match the winning sequence will win a share of the prize fund, depending on how many numbers match the drawn numbers.

Users can now try out the lottery in Ethereum test net. Currently, FireLotto has three daily offerings in the shape of 6/45, 5/36 and 4/20 lotteries with tickets costing 0.003 ETH, each with their own separate prize pool totaling 468 ETH (valued at $428,922) at time of writing. Users can also play the instant lottery game called Roger’s Wheel, which, if won, will award an instant prize based on a multiplier from 2 to 20. Minimum bets start at 0.007 ETH.

Unique from the majority of other token sales, FireLotto has a working product that can already be viewed and tested. After concluding successful private pre-sale and pre-sale events, the general FLOT token sale will launch on March 15th, 2018 and run for a month until April 15th, 2018.

100 million FLOT tokens will be issued, of which 77 million will be sold to the public. Funds raised will go towards further development of the technology and platform, as well as marketing and advertising campaigns.

Because FLOT holders earn a share of ticket commissions from every draw, paid out via smart contracts, FLOT represents a limitless opportunity for guaranteed passive income.

For more information on FireLotto, visit the website and read its technical details in the whitepaper. Follow the news on Twitter or catch up with the team on Telegram.

Tags
Lottery Blockchain Ethereum Smart contract Token Contract Tickets Pool Pre-Sale
Most Popular
May 08, 2021 at 11:25
News
There is Fire in the Cryptocurrency Market As Dogecoin Could Be the Next Big Thing
May 08, 2021 at 10:26
News
Polkadot Attempts to Breach $40 Resistance, Lacks Buyers at Higher Price Levels
May 08, 2021 at 09:39
News
Ethereum Continues Its Bullish Run As It Attempts to Jump Over $3,750 High
May 07, 2021 at 12:43
News
Ripple Faces Stiff Resistance at $1.70 High as Bears Attempt to Sink XRP to $1.00 Low
May 07, 2021 at 10:39
News
Revolut Users Will Gain Stronger Control of Their Bitcoins with New Withdrawal Feature
More